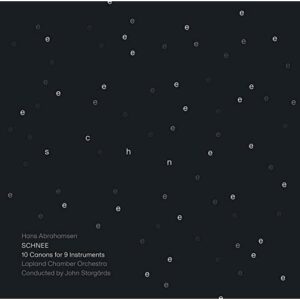 This is the second recording of Hans Abrahamsen’s Schnee (‘Snow,’ 2008), an hourlong imaginative ensemble work populated by idiosyncratic canons interspersed with intermezzos. The first, by Ensemble Recherche in 2015, was an excellent document of the piece. That said, this second interpretation is welcome, as it brings out different aspects of Schnee. Recherche’s recording is atmospheric and colorful, while Lapland Chamber Orchestra provides a rhythmically charged and dramatically intense rendition, in vivid sound with a wide dynamic range, and incisive delineation of canonic voices.

One needn’t adopt a programme for listening to Schnee, but the gestures in Canon 1A  are suggestive: pitched percussion and keyboard as gentle snow falling, squalls of wind in the searing violin and clarinet lines. Another way in, one accentuated in Lapland’s recording, is the pervasive counterpoint in imaginative technical and instrumental combinations. Followed by a hushed sustain in Intermezzo 1, Canon 2B is a signature example of Abrahamsen’s writing at its most rigorous, with overlaps between strings and winds and emphatic keyboard glissandos creating a vigorous, linearly saturated ambience. Where the clarinet and piano led Canon 1, here the flute provides altissimo lines and flourishes that take center stage. The denouement of the movement resembles an ostinato by Stravinsky.

Schnee is abundantly varied. Each movement shifts both the canonic devices used and the way in which they are scored.Canon 3A presents slower moving lines, with glissandos punctuating brass iterations of the canon. As Schnee moves towards its conclusion, compression takes place and the last two sets of canons and intermezzos are miniatures in comparison to the previous sections. They may be compact, but the concluding portions are powerfully wrought, containing permutations of many of the previous lines and textures, but now overlaid and juxtaposed to create a potent summary.

Abrahamsen is one of our great living composers – he turns seventy this year. Schnee was a turning point piece for him, and it is good to hear it encompassing multiple performances that serve to develop its interpretative possibilities. Keeping with the wintry theme, Abrahamsen is now at work on his first opera, an adaptation of Hans Christian Andersen’s “The Snow Queen.”