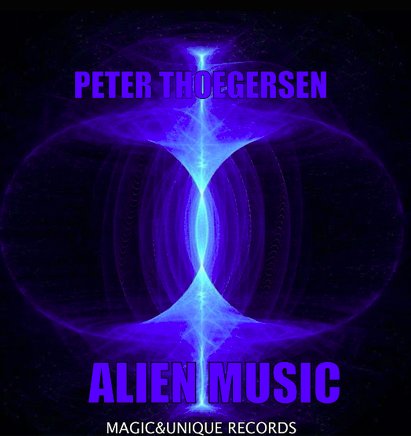 Magic&Unique Records has released Alien Music, a collection of the early works of Peter Thoegersen that combine alternate tuning with polytempic meters. With pieces dating from 2002, this album offers a baseline view of Thoegersen’s long-time exploration of the interrelationships between pitch and rhythm. As he writes in the liner notes: “Alien Music is essentially my first Polytempic Polymicrotonal piece composed from a four part drumset composition in four simultaneous meters/tempos: 3, 4, 5, 7, all played in one sitting. There are additional microtonal instruments added in different tunings: 12tet, 19tet, 7 tone slendro, and 5 tone pelog, tuned to parity with 7-limit just.”

The album consists of Alien Music and seven other tracks that incorporate a variety of experimental tunings, meters, different types of percussion, electronic sounds and even spoken phrases or chant. Thoegersen also includes original etudes and studies that reach back to the earliest realizations of his imaginative musical formulations. All the tracks on the album can be called alien in the sense that they sound otherworldly, but there is a double meaning in the album title: Thoegersen’s Polytempic Polymicrotonal music is also alien to all that has gone before it.

The title track, Alien Music, is perhaps the most developed piece of the collection. This opens with a steady percussive beat and an engaging microtonal melody in the marimba. Thoegersen’s crisp drumming weaves in and out of the texture, supported by an ambient wash in the deep background. The contrast of the frenetic drumming, cymbal crashes, marimba line and luminous bell tones with an undercurrent of languid strings is at once unsettling and engaging. The mixing is carefully crafted and does not unnecessarily favor any one element, allowing each to add to the total. The level of tension rises and falls as the piece proceeds, depending on what sounds are heard in the foreground. The active drumming subsides and then builds up in cycles and the ambient strings occasionally dominate to produce a mysterious feel. A nice groove develops in the percussion towards the finish and the piece ends with a soft bell tone that seems to hang in the air. For all its rhythmic and harmonic complexity, Alien Music holds together convincingly, with each unique element contributing to a cohesive and pleasing overall sound.

Other pieces on the album explore subsets of the polytempic and polymicrotonal possibilities that were incorporated into Alien Music. The shortest piece of the album is Polymicrotonality Etude VII, and this contains just an unintelligible echoed voice with bell microtones, one complimenting the other to create an increasingly anxious feel. Gorgeous Monstrosity, track 2, starts with a light tapping and scuffing, continually building to eventually include mechanical percussion and chimes. There is less integration of rhythm and pitch in this track but nevertheless it conveys a distinctively alien feel. Iraq, track 7, features more of Thoegersen’s solid drumming along with an almost conventional accompaniment of synthesized rock band and electronic keyboard. A sort of rough spoken rap is heard against a lyrical contrasting vocal line, and the ensemble works effectively to make a political statement critical of the invasion of Iraq. The other tracks of Alien Music are much like watching experiments in a laboratory, with each trying assess the potential of various combinations of ensemble, rhythm and tuning.

The impact of alternate tuning in contemporary music is still working itself out. Originally employed as a way to restore some character to the compromised conventional 12-tone equal temperament scale, alternate tuning has become a highly mathematical and theoretical discipline as well as an ongoing search for new harmonic syntax. Adding a polytempic component in addition to the microtone pitch set has been Thoegersen’s line of inquiry for over 20 years. His later works, such as Three Pieces in Polytempic Polymicrotonality from 2019, show a more mature handling of the polytempic polymicrotonal paradigm and are worth hearing for comparison. Alien Music provides a look into the origins of this system and gives us bright flashes of its future promise.

Alien Music is available for listening and download on Spotify.