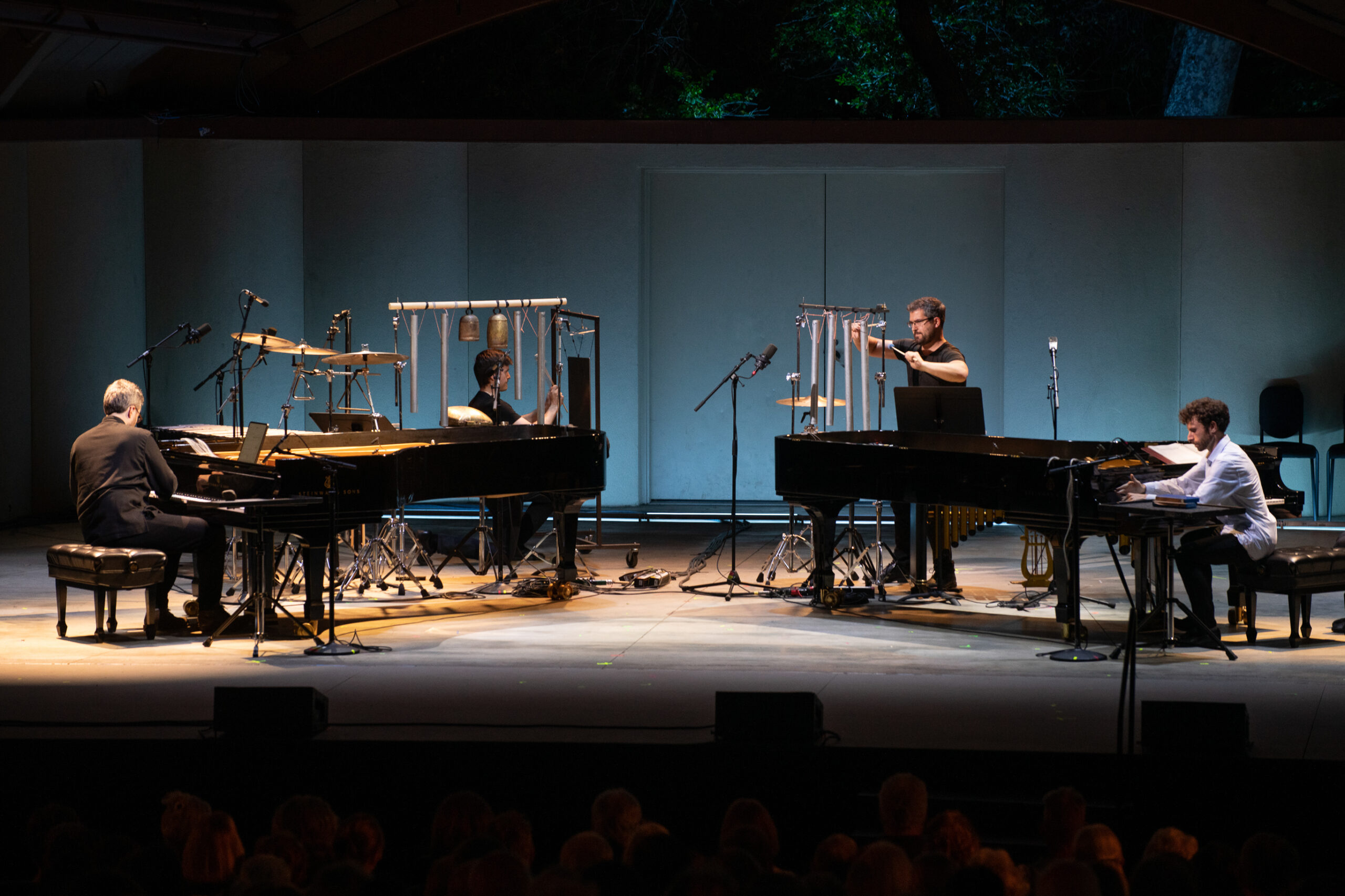 On Saturday, June11, 2022 the Ojai Music Festival evening concert featured Little Jimmy, by Andrew McIntosh along with Deep Water Trawling and Family Dinner, both by Matthew Aucoin. The Libbey Bowl was mostly filled as was the lawn seating. A perfect evening, clear and warm, added to the pleasant Ojai atmosphere.

Andrew McIntosh is a Los Angeles-based composer and gifted violinist who is also an avid outdoorsman. Andrew has made it to the summit of several peaks in the Sierras as well as Mount Shashta, and he can often be found hiking the local trails. Little Jimmy is named for a popular backpacking camp on Mount Islip in the San Gabriel Mountains. McIntosh has written several chamber pieces for strings, an opera – Bonnie and Clyde – and several microtonal pieces. He has also composed I Hold the Lion’s Paw, a large-scale work for the Los Angeles Percussion Quartet.

Little Jimmy springs directly from McIntosh’s environmental muse. Perhaps not surprisingly, this is a quietly nuanced percussion piece from a widely accomplished string player. The Libbey Bowl stage was set with hanging metal tubes, a steel plate, a vibraphone, triangles, a series of cymbals and a brake drum that brought to mind the inventive creations of Lou Harrison. Jonny Allen and Mari Yoshinaga were the percussionists while Conor Hanick and Matthew Aucoin were stationed at two pianos on opposite sides of the stage.

Little Jimmy opens in a series of triangle and percussive piano notes that give a rough, spiky feel, as if one is walking over the gravel of the San Gabriel foothills. A moment or two of silence follows and then a low roaring sound is heard from the rubbing of a rock on a piece of slate. A field recording of local bird calls evokes the remote landscape around a small creek or mountain stream. The vibraphone adds a few mystical tones, perhaps a glimpse of the high mountains ahead. The vibraphone plates are then bowed, adding to the sense of a transcendent immersion in nature.

As the piece proceeds, the quiet organic sounds give way to a more purposeful feel in the piano phrasing along with a few solitary chimes, perhaps signaling an ascent along the trail. Drones materialize with the drawing of cords across the piano strings. This sound intensifies while soft mallets on the metal tubes summon the mystical pull of the mountain peaks in the distance. A sudden, loud gong is struck followed by dramatic, low notes from the piano, signaling that the high point with a majestic view has been reached. After a short stretch of repeating phrases, perhaps indicating a descent, the bird calls and rushing sounds first heard at the starting point return. The rock is now rubbed on the brake drum along with a bowed cymbal that intensifies the feeling of completeness. A single chime sounds at the finish – a benediction in the cathedral of nature.

The subtlety of the piece was a perhaps a bit confusing to audience at first, but the quiet nuance encouraged close listening and the understatement soon came to be appreciated. Little Jimmy contains all the metaphorical elements of a picturesque hike in the San Gabriel mountains and was convincingly conjured through the imaginative use of percussion and two pianos.

An intermission followed and Deep Water Trawling, by Matthew Aucoin was next. This was everything Little Jimmy was not – loud, urgent and realized with formidable musical forces conducted by the composer. Despite these differences in approach and style, Deep Water Trawling shares with the McIntosh piece a similar attitude on the environment. The program notes state that Jorie Graham’s text for Deep Water Trawling “…addresses the issue of humanity’s impact on nature and the climate, presenting the perspective of the ocean from beneath in response to the problematic practice of fishing with a trawl net.” Accordingly, deep cello tones are heard in the opening along with piano notes in the lower registers. The instruments enter boldly, vividly evoking all the drama, mystery and pressure of the ocean depths. The vocal line “Ask us anything” initiates a dialogue between humans in the soprano voice and the creatures of the depths in the lower voices. There is a spooky and surreal feeling to this; we are clearly being called to account for over-fishing and other environmental transgressions perpetrated by humans in the ocean. As the piece proceeds, full voices and accompanying instruments weave a compelling and cautionary tale. Deep Water Trawling cries out as a powerful indictment of our stewardship of the sea and warns of the ultimate effects on our civilization.

Commissioned by the Ojai Music Festival, the world premiere of Family Dinner by AMROC co-founder Matthew Aucoin followed. This is a large-scale work consisting of a series of ‘mini-concertos’ connected together with poetry readings, spoken anecdotes and toasts such as might be offered at a large family dinner. The muscular musical forces on the stage gave vigorous voice to Aucoin’s vision of “dialogue movements, songful outpourings and raucous dances.” The AMROC personnel that made up the ensemble proved equal to rigorous task before them and performed brilliantly throughout this extensive piece. The sounds called for by the score were highly varied, depending on the scene, but the instruments and voices were always on the mark. Given its impressive length and heft, Family Dinner can trace no doubt its origins to Aucoin’s extensive experience in the world of opera. The music was artfully composed and skillfully performed, but stayed close to conventional gestures and forms. A dazzling platform for virtuosity, Family Dinner delivers almost too much – like an out-sized Thanksgiving meal.