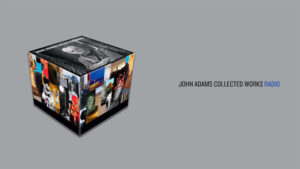 What a seventy-fifth birthday present. Today, Nonesuch releases John Adams Collected Works, a 40-CD compendium of his recordings for the label and a few from other imprints.

The curation of the set has thoughtful touches. It begins with Harmonielehre, the 1985 recording by Edo de Waart that began Adams’s association with Nonesuch and ends with a live recording of the same work by the Berlin Philharmonic, which released its own Adams boxed set a few years back (well worth seeking out). There are extensive liner notes, with essays by Timo Andres, Nico Muhly, Jake Wilder-Smith, Julia Bullock, and Robert Hurwitz.

Adams continues his creativity apace. Accordingly, space has been left in the box for future recordings.