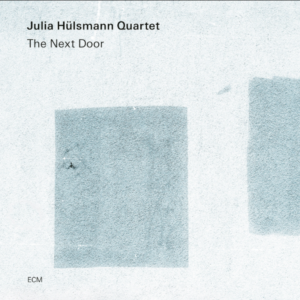 Since their 2019 debut recording, Not Far From Here, the Julia Hülsmann Quartet has spent a lot of time touring and gigging, refining their sound and improvisational aesthetic. The group’s latest recording, The Next Door, is primarily comprised of originals by quartet members, alongside a scintillating rock cover. The addition of tenor saxophonist Uli Kemperdorff to Hülsmann’s long standing trio with bassist Marc Muellbauer and drummer Heinrich Köbberling has been a winning choice. Kemperdorff’s florid runs contain a sunniness that buoys the musical atmosphere. Muellbauer often finds voicing for bass lines that eschew roots in favor of higher overtones, allowing his playing to blend with the chordal choices made by Hülsmann. Köbberling’s gifts are versatile. He knows when to press the players forward and instead to focus on fills and syncopation.

The album opens with “Empty Hands,” in which polymetric chordal planing in the piano is abetted first by a bass solo and then doubled melody with Kemperdorff. Hülsmann then plays a solo with undulating twists and turns and a change of mode midway. Kemperdorff’s solo turn is also filled with arpeggiation at rapid speed. Köbberling begins to assert himself in the last few choruses of saxophone soloing, which is followed once again by a doubling of the head, a bit more ornamented and ended without a button (a welcome way and underutilized way to stop).

“Made of Wood” is a standout track. Beginning with a saxophone solo, the head appears afterwards, once again doubled by saxophone and piano, a texture that the group takes as formative. Muellbauer and Köbberling work in an offsetted way against the melody instruments, finding holes for fills and bass riffs between phrase barriers. Hülsmann plays a lithe single-line solo which gradually is embellished with chromatic harmonies. Kemperdorff’s second solo turn is abbreviated in favor of a duet with Hülsmann. A brief denouement closes the tune.

“Wasp at the Window” features a multi-stop bass solo with percussive slaps to open. Kemperdorff then plays moto perpetuo scales that give us the dangerous little insect in motion. Hülsmann provides the wasp with a bit more of a swinging, jaunty swagger and the intricacies of the group’s rhythmic palette suggest the way the guest might nervously be perceived. It is a charming use of programmatic playing. “Jetz Nocht Nicht” is a set of imitative duets between saxophone and piano that could are an appealing but knotty musical puzzle. There is a reprise later in which the entire quartet gets to add their own strands to the counterpoint.

Hülsmann contributes five compositions to The Next Door, and shares writing duties with other members of the quartet. “Lightcap” is by Köbberling, and is a reference to the bassist Chris Lightcap, with whom the drummer played in the nineties. Kemperdorff plays a rangy and fiery solo over wide spaced changes. Köbberling shifts the underlying pulsation several times, asserting himself in his own piece. The last section is a funky outro that, as before, avoids punctuation at its close. “Post Post Post,” the drummer’s other composition, has an ambling melody that appears in various incarnations throughout the group’s haunting improvisations.

Kemperdorff’s “Open Up” is a hard swinging tune with bent notes and a sturdy harmonic background that gives Hülsmann plenty of room for substitutions. The rhythm section revels in playing in this trad-mod context. Both saxophone and piano solos are expressive and virtuosic in technical demands. Octave lines shared between piano, saxophone, and bass open “Polychrome,” a Muellbauer composition, which are followed by a pensive piano interlude that takes as much from Webern as from post-bop. Kemperdorff plays with extended scales that encompass the fully chromatic in several different patternings. Muellbauer provides grounding to this fiendishly difficult progression.

Hülsmann frequently uses water imagery, and “Fluid” takes the idea of a crescendoing arc, topped by waves of melody, as the formal design for this affecting ballad. When the pianist takes her solo, we move from the motile water music to equally lithe but swinging music for the quartet. Scalar passages bring back the sense of water’s flow, followed by cascading runs by Kemperdorff that also draw fluid to mind.” A final section of flowing arpeggios and muscular drums brings the piece to a close. Muellbauer makes a clever amalgam in the bossa nova “Valdemossa,” combining the traditional dance’s gestures with the chord progression from Chopin’s enigmatic Prelude in E-minor. The combination works beautifully, with Hülsmann leading in to her neoclassical side while Kemperdorff underscores tango rhythms in his solo turn.

A pop cover is often found on Hülsmann’s recordings. Here it is Prince’s “Sometimes it Snows in April.” It first appeared on Under the Red Cherry Tree, and the song’s long intro and quirky harmonic shifts are reflected in the quartet’s faithful and affecting recording. The Next Door shows a group that has developed its sound exploring different musical pathways with authority. Recommended.