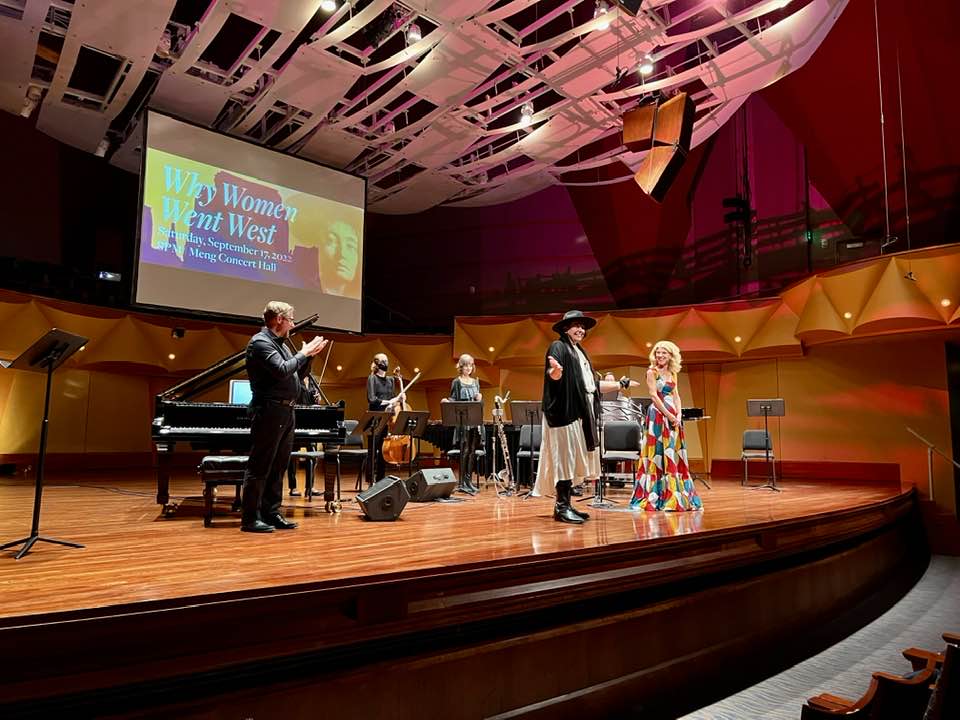 On Saturday, September 17, 2022, the Meng Concert Hall at Cal State Fullerton was the venue for the world premiere of Why Women Went West, a new chamber opera by composer Pamela Madsen. The opera was presented in concert format, performing the musical elements and including the supplementary videos and electronics. Brightwork newmusic provided the main instrumental accompaniment from the stage with supporting musicians stationed all along the perimeter of the hall. Stacey Fraser, the acclaimed soprano, was the vocal soloist.

Why Women Went West is the story of Mary Hunter Austin, who left her Midwestern hometown in the late 19th century for a pioneer life in California and New Mexico. This is not a bawdy Calamity Jane-type send up of the wild west, but rather a deeply personal journey of self-discovery and hard-won independence. The story is filled with all the challenges and trauma experienced by self-reliant women of the time. Through this process, Mary Austin became a feminist, conservationist, writer and advocate for Native American and Spanish-American rights. The program notes state that the opera “…chronicles Mary Austin’s escape from persecution to transformation of white women’s privilege and passion for preservation of nature, history and indigenous culture.”

Why Women Went West is a two-act opera, with seven scenes in each act for a total running time of almost 90 minutes. Act I is titled “Leaving Home-Earth Horizon” and the first scene is “Echo: Empathy Superimposition.” This introduces the setting of the opera with a multimedia presentation consisting of video, sound track and electronics. The recorded accompaniment includes soprano Stacey Fraser, Aron Kallay on piano and the CSUF New Music Ensemble. The black and white video by Quintan Ana Wikswo shows scenes of mountains, forests and streams; a western landscape that is at once familiar, but at the same time fiercely primal, with a definite undercurrent of menace. Scenes of rough outdoor camping vividly depict the difficulties of traveling in such harsh terrain. The music here is ghostly and surreal, perfectly matching the images projected on the screen. Mary Hunter Austin’s journey through the west was clearly no vacation.

Subsequent scenes in Act I built on this sense of danger and the ominous. The musicians, having taken their places on stage at the close of the introductory video, begin with loud drumming and dark piano lines. The soprano vocal starts off in a low register but the overall feeling becomes a bit brighter with the entry of a reassuring violin passage that combines nicely with Ms. Fraser’s clear articulation and strongly expressive singing. More dark scenes follow, sometimes with video and other times without – often with the soprano voice but at other times with just the instrumental ensemble. “The Birds Here”, scene IV, features a video of hawks hunting above a mountain stream, “Owl’s Breath” was next and featured some really frightening scenes of young white owls. The instrumental ensemble, dominated by the bass clarinet of Brian Walsh, created a skittering cacophony of sounds that added to the unnerving imagery. Clearly, traveling through the 19th century American western wilderness was a formidable undertaking both physically and spiritually, forming the crucible for Mary Austin’s re-invented identity.

Scene VI, “The Necessary,” opens with video of a tree-filled landscape featuring roots and leaves in a series of darkly Gothic images. There is spoken text and the Brightwork ensemble enters, with soft vocals from Ms. Fraser underneath. The video ceases; it is as if the great weight of a difficult westward journey has finally been lifted. The acoustic ensemble now dominates, adding a welcome measure of optimism. The sweetly sung vocal line weaves in and around with beautiful harmony and the overall feeling becomes resolutely hopeful. High arcing soprano lines, confidently sung, add to a sense of deliverance and attainment – the long westward odyssey has been successfully completed. The final scene is stronger still, with stirring music that brings Act I to it’s reassuring conclusion.

The buoyant finish of the final two scenes of Act I, after what had been a long series of darker settings, makes for a contrast that is all the more striking for the listener. Composer Madsen’s expressive sense of harmony and control of texture is brilliantly fluid, with each scene carefully crafted so that the shadows in the music are not tedious or oppressive. The affirming relief felt in the music of the last two scenes of Act 1 proves most effective and is all the more gratifying as a result.

Act II has the title “The Land of Little Rain – California to the Land of Journey’s Ending-New Mexico”. The music of the opening scenes immediately establishes an exotic feel with a maraca and spoken text that describes an arid and inhospitable land. The feelings from these opening scenes in Act II, however, are more settled and secure, as if the trials of surviving in the wilderness are past and Mary Austin Hunter has now arrived and is successfully embedded into new cultural surroundings.

“Prayer for My Daughter” Scene III is especially powerful with Ms. Fraser’s expressive soprano voice paired with a lovely violin accompaniment. There is the pathos of powerful loss in this, but at the same time strength in the soprano line that rises ever-upwards, bringing out Ms. Fraser’s masterful command of her voice through all registers. This piece is perhaps the most moving of the entire opera and was beautifully effective. “57 Buzzards”, part of Scene IV, features sharp twittering from the woodwinds, percussion and the musicians surrounding the audience. There is a confused feeling to this and the instruments seem to be in opposition to the spoken text, with the bird sounds representing chaos.

The climax of the opera occurs in Scene V, “The Consecrating Mother / Mary, Mary by Herself.” A softly pensive piano and cello accompany Stacey Fraser singing the words of Mary Austin Hunter. The feeling is now one of accomplishment and hopefulness, it is as if Mary has finally arrived at the conclusion of her spiritual journey, having worked out her sense of independence and identity. The singing is beautiful, confident and dramatic with accompaniment to match. “Going West”, the final scene, is a stately summing up of the protagonist’s resolve to discover herself through the physical challenges of the wilderness and by assimilation into a new cultural context.

Why Women Went West, as given in this concert format, builds a solid musical foundation for the future staged production. The scoring, playing and singing are all on a very high order as are the video, electronics and sound engineering. Why Women Went West was funded with support from the National Endowment of the Arts, Opera America and the Wurlitzer Foundation. The libretto and text were by Pamela Madsen (after Mary Austin Hunter) and Quintan Ana Wikswo. Additional texts by T.S. Eliot, Terri Niccum and W.B. Yeats. Jen Kutler realized the electronics.

Pamela Madsen will be the featured guest composer in residence at Operation Opera, Cal State University Sacramento next year. A fully staged premiere of Why Women Went West is in the planning stage for their Opera Festival, to be held in early June 2023.

A video of the concert version is now available here.