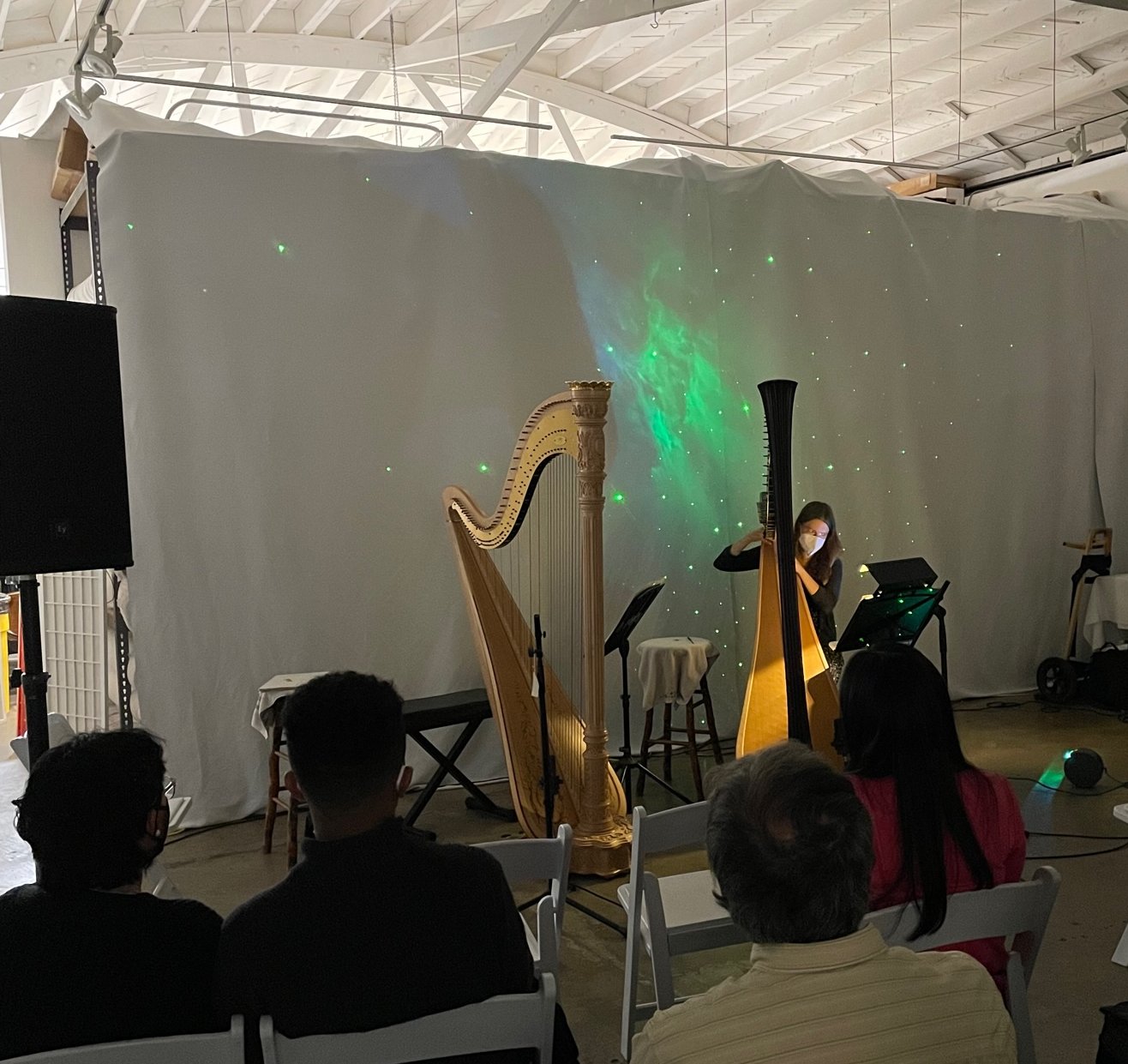 Elizabeth Huston and Catherine Litaker were the featured performers for Play Nice – An Evening of Two Harps, a concert presented by Synchromy and held on a rainy December 1, 2022. Originally scheduled for 2020, this concert was postponed for two years due to the Covid pandemic. Six pieces, including two world premieres, were on the program performed at the CadFab Creative gallery in the Culver City Arts District. A wide variety of unusual harp music was heard including solos, duos, extended techniques and pieces with integrated electronic processing.

The first half of the concert was titled Interstellar Space and opened with Suite Galactique, a solo work by Caroline Lizotte and performed by Catherine Litaker. This piece had two parts and the first, Exosphére, was a musical exploration of the extreme outer limits of earth’s atmosphere. This began slowly, with soft harp notes heard singly, then accelerating as more notes were added from the middle and lower registers. As the phrases moved up in pitch, the notes evoked the free and rising feeling of air escaping earth to the upper atmosphere. As the piece proceeded, more notes added a dimension of complexity that produced an introspective feeling. The playing was impressive and the shower of notes towards the finish produced a lovely sound that captured the giddy sense of the lightest of air molecules dancing in the outer reaches of the exosphere. The pitches continued moving upward and before trailing off in the very highest string register.

The second part of Suite Galactique was Hymne au Bon, and this had a more human and primal focus. As the programs notes explained: “The warrior sits down around a fire with his companions… The chattering effect in the very first bars suggest to us that the warrior is exhausted and cold after a hard struggle.” This was heard clearly as a buzzing sound created by a short piece of paper held in contact with one of the longer harp strings that was rapidly vibrating. The harp then produced a dramatic and familiar melody with a strongly Homeric sensibility. The feeling of relief that the warmth of a fire brings is present in the long runs of notes, aided by some singing by the harpist. Hymne au Bon has an ancient feel, a mixture of fatigue and wistful regret that artfully sketches the timeless image of a warrior resting after battle.

Starscape, by Jan Krzywicki, was next and intended as “…an evocation of night, the night sky and night thoughts.” This was performed by Elizabeth Huston and featured a continuous projection of changing star patterns on the back wall of the stage area. The music began with light trills accompanied by solitary notes and short runs. Drama was added as the piece progressed, with changes in dynamics, runs of notes that were variously faster or slower and some that were sharply struck. At times, the harp sounded a bit like a guitar, but with many more notes and pitches. Near the finish, a suggestion of tension crept in to the harmony but this did not detract from the overall feeling of space as mysterious and strange – but not menacing. A varied mix of playing techniques was required and this was accomplished with poise and confidence by Ms. Huston.

NCTRN V “beast of land and sea” followed, a world premiere composed by Nicholas Deyoe. The piece was commissioned by Synchromy with support from the American Harp Society. It is described in the program notes as a “solo for two harpists.” The opening tutti chord has a dark, uncertain feel and the subsequent harmonies were often dissonant but generally engaging. The two harps traded some interesting rhythms back and forth, and there was good visual communication between the players. As NCTRN V continued, a dark and murky feel developed, with the roiling texture suggesting a turbulent sea. The notes now had a more organic sound and towards the finish the harpists created a series of clicking sounds by running plastic rods along the tuning pins of each harp – all of this suggested whales signaling to each other in the dark depths of the sea. Harp music is seldom heard as a duo, and although this piece was at the margins of typical performance practice, and included extended techniques, it was played with great skill and coordination.

The second half of the concert focused on storytelling and opened with The Juniper Tree, by Rebecca Larkin. This was based on the Brothers Grimm story of the same name and was a disquieting reminder of how gruesome those old stories could be. The plot revolved around a young boy who is murdered by his step-mother, beheaded and cooked into a soup that his father was fed for dinner, unaware of its origin. The bones of the boy – all that is left of him – are buried by his younger sister under a juniper tree where his birth mother was interred. A bird, representing the boy’s spirit, soon appears in the tree singing beautiful songs. This bird flies about, collecting items from the townsfolk; a pair of dancing shoes for the sister, a gold chain for the father and a huge millstone that the bird uses to crush the wicked step-mother in revenge.

The story was vividly narrated by Leandro Cano while the harp duo supplied the accompanying music. The unfolding of this fairy tale was highly dramatic and the music kept pace with the swirl of emotions throughout. So well-matched was the music to the story line that the narration and the music became fused together in the listener’s brain. This was similar to watching a silent film accompanied by an orchestra – at some point the visual and the aural merge into a single perception. The harp playing was artfully executed and complimented the grim narration nicely. The Juniper Tree is an unforgettable story combined with artfully expressive music that leaves the listener simultaneously shaken and consoled.

Play Nice, by Eve Beglarian, followed and is well-named. The piece is intended to be performed by both Elizabeth Huston and Catherine Litaker on the same harp. Play Nice is disarmingly simple in its musical construction; the program notes describe it as “…totally diatonic, doesn’t even require two octaves on the harp, uses standard minimalist variation techniques, and in virtually every way plays nice, except for the performers. It’s actually a mean little thing.” The piece began with simple, single notes by Ms. Huston, seated conventionally at the harp. Ms. Litaker, standing to one side, joined in, adding her notes from the opposite side of the harp strings. With the repeating phrases and straightforward rhythms, a pleasing groove soon developed that was recognizably minimalist in both character and charm. The coordination between the players was impressive and visual communication had to be conducted while looking through the harp strings. Ms. Litaker commented later that she had to find her notes from what would be the opposite side of the harp from her normal hand position – a significant playing challenge, however straightforward the music. Play Nice is not only inventive and entertaining, but a chance to appreciate a duo performance in a unique configuration.

The final piece of the concert was the world premiere of {An End for a New Beginning} by Joshua Carro. This was aptly described in the program notes as “a work that symbolizes an interest to use instruments in new and unconventional ways.” Both harps were included as well as microphones, a large array of processing modules and the composer stationed off-stage at a laptop. A large three-dimensional image was projected on the back stage wall and this was programmed to change shape in response to the sounds from the two harps. The piece opened with the slapping of the lower harp strings so that deep, complex tones were sent into the microphones. The spherical image on the screen quickly morphed into a partially flattened doughnut that seemed to shimmer and squirm as the vibrations from the harps dissipated. Sticks were then drawn across the higher strings and this resulted in a series of sharp spikes around the perimeter of the image.

Various harp sounds were translated quickly into changes on the screen and the effects were mesmerizing to watch. All sorts of sounds came from the harps – buzzing, squealing, tones and thumping – everything, it seemed, except conventional melody. The extended effects were similar to those often heard on a piano, and in response the image rotated, swirled, expanded and contracted in a wide variety of shapes and contortions. The action was very smooth and the figure on the screen convincingly resembled a living organism. {An End for a New Beginning} boldly leaves behind traditional musical forms and content, replacing these with a new and intriguing amalgam of the sonic and the visual.

The Play Nice concert extended the creative horizons of the venerable harp, providing both inventive entertainment and intellectual enlightenment. The playing, while often far outside the scope of conventional harp performance practice, was superb and equal to the many technical challenges.