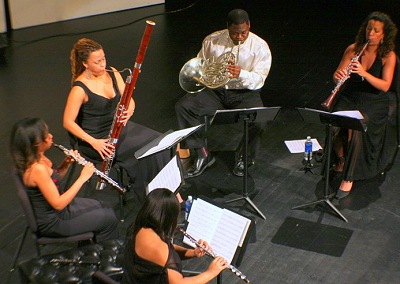 Imani Winds decided some time ago to make their tenth anniversary special, by commissioning ten new works from ten very different composers of color. Titled the Legacy Project, each new work not only gets premiered, but added to Imani’s rolling repertory as they perform across the country and beyond. So far they’ve taken on pieces by Wayne Shorter, Roberto Sierra, Alvin Singleton, Daniel Bernard Roumain, and Jason Moran; Danilo Perez, Jeff Scott and Simon Shaheen (and I suppose a mystery 10th composer) are in the wings.

But just now the latest offering is stellar jazz vibraphonist Stefon Harris‘ Anatomy of a Box (A Sonic Painting in Wood, Metal and Wind). Imani already showed it off this past week at Iowa State and Penn State; now they’re about to give the West Coast their chance, with concerts Oct. 2, 8:00PM  at Cal Poly Arts (Spanos Theatre) in San Luis Obispo, CA; and Oct. 4, 7:00PM at the Herbst Theatre in San Francisco. Imani Winds has always put their impressive chops at the service not only of the ‘official’ canon, but also pieces that reach out to someplace in the wider world beyond the typical classical concert stage. Hey California, come and hear for yourself.

One thought on “Legacy in progress”