Houston Mixtape #3: The Epicenter Of Noise 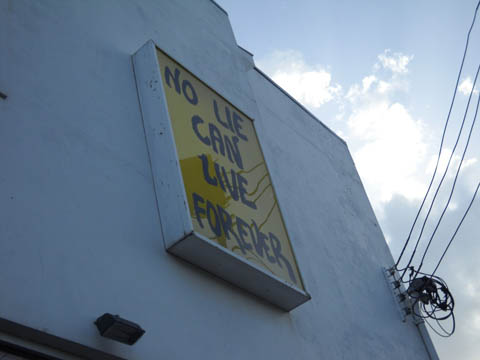 Outside the Eldorado Ballroom, Houston, TX (Photo by Chris Becker)

“ …(Houston is) one of the epicenters of noise bands and experimental music. Nobody even knows that, you know? ” Dan Workman of Houston’s Sugarhill Studios.

Here’s an excerpt of a recording I made of a Houston thunderstorm using a Zoom H4 recorder positioned just behind the front screen door to our house. You might want to turn down the volume about half way through if you listen to this headphones:

New York City – the city where I lived for twelve years before relocating to Houston, Texas – is LOUD. In my mind’s ear, I can STILL hear the car horns, the jackhammers, the fire truck sirens (we lived one block away from a fire station), the garbage trucks flipping over dumpsters filled with glass and concrete (BEEP! BEEP! BEEP! BEEP!) and…the subways. Oh Lord, the SUBWAYS! Two musician friends of mine wore earplugs every time they traveled underground. My wife ALWAYS covered her ears when the trains screeched to a halt at the platforms. Loudspeakers in the stations and on the trains intermittently blared out jaunty yet nearly incomprehensible warnings about rerouted trains and “suspicious packages.” (Remember…if you SEE something, SAY something!) And microphone feedback? The MTA’s gotcha covered.

So being a sensitive composer with sensitive ears, the first thing I noticed about Houston once we’d moved down here is how much quieter it is compared to New York City. And what tweaked my ears my first few weeks on the ground wasn’t the omnipresent hum of the Interstate 610 loop. It was the unpredictable antiphonal chatter of Houston’s bird population. The screeches and cooing were so intriguing to me, I spent the first couple months in our new city composing a piece of “musique concrete” utilizing several recordings I’d made of the birds in our front and back yards. There is a truly rural almost wild (as in wilderness) vibe to the city outside of downtown and the aforementioned beltways.

How did a city that to my ears is so much quieter than NYC come to be known as an “epicenter of noise”? Make no mistake, some of the Houston noise artists I’ve checked out make Nine Inch Nails sound like Sting. But one thing the Houston musicians I’ve reached out to regarding the “noise” scene agree on is that one person’s “noise” is another’s poetry. The hierarchal notion that a note from a clarinet somehow contains more emotional profundity than the sound of a hammer hitting a nail doesn’t really exist in the minds of (most) 21st century musicians (One of my “non-noise” composer friends pointed out that noise just like “music” can “evoke a wide range of sentiment”). But my research yielded so MANY Texas musicians either explicitly flying the “noise” flag (Concrete Violin, Spike The Percussionist, Richard Ramirez) or so loosely attached to however one might define “noise” (the grime meets speed metal music of B L A C K I E is one such example) that I wondered who or what exactly I could write about in this dispatch.

It occurs to me that one of my favorite recordings, “Dark Was The Night, Cold Was The Ground,” was created by a Texan (Blind Willie Johnson in case you didn’t know). The timbre Johnson’s vocal lies somewhere between a whisper and a scream while his phrasing conveys a feeling of both defiance and resignation. Consider the title Johnson gave to this recording. Has the uniquely Southwestern connection to the earth – the dirt that we all will return to one day – disappeared in the years since the 1920’s when Johnson tracked his performance? I don’t think so. And in the noise of that recording (the slide on the guitar strings…the rumble of the grooves of the record itself…) is there some precedent for the Dadist freak outs of Houston ’s Red Krayola? Or the electric jug playing of the 13th Floor Elevators? Or the stinging strings of Lightning Hopkins, Clarence “Gatemouth” Brown, or Little Joe Washington?

Perhaps “noise” – that succinct descriptive noun – is actually in practice a portal to a sensory experience that isn’t so easy to describe but one we immediately feel and understand. To quote Morton Feldman: “…these moments when one loses control…and with a thrust there is no sound, no tone…nothing left but the significance of our first breath.”

Like rain and thunder. Or “cicadas making noise…” Or the crazy Houston doves that carry on their pygmy like conversations from the trees around my house from sun up to sun down. 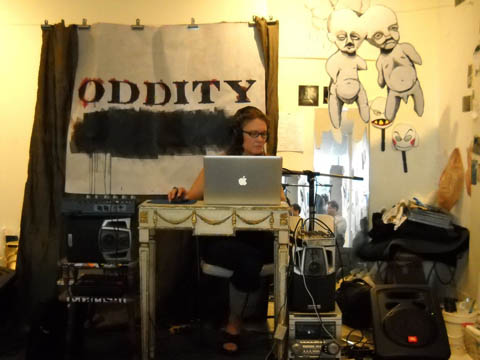 Houston’s gallery and performance space Labotanica is currently hosting a monthly concert series called hereherhear that features women in experimental music. The first concert in June included artists from Houston, Baltimore, and New York. Last Friday, I attended July’s hereherhear concert event featuring the collective Pear Prickley Pear, vocalist/ composer Alexandra Marculewicz Adshead, and DJ/Electronic artist Khrystah Gorham. On display at Labotanica was Yet Torres’ mixed media installation EYE-CANDY DELECTABLY which explores objectification and the body via Torres’ own mysterious, grotesque, and at times humorous iconography. Plenty of people turned up for the concert, and I was happy to see that at a little after 7pm the performers would be playing to a full house.

Earlier in July, Alexandra invited members of the Houston community to email her mp3s of samples that she might incorporate into her performance at Labotanica. I responded with my front and back yard bird piece and was delighted when Alexandra contacted me to say that she would indeed use it for her upcoming gig. Samples from Pear Prickley Pear and composer Steve Layton would also become a part of Alexandra’s show.

Alexandra’s recorded works blend composed structures with improvised sometimes heavily processed vocals that at times is character driven or seemingly inspired by the sounds of nature, animals, and even her one-year old daughter. What struck me when I first listened to her music online was the sound of her voice – her tone and the emotive quality it contained. A voice sometimes jumps out at you in that way.

In performance, Alexandra utilized the laptop computer to play back the composed structures of her works while processing her live vocals through a variety of unpredictable effects. In one piece, she told the story of a woman’s descent into madness with a delivery that initially sounded as if she were reading a slightly unnerving bedtime story until flange and delay transformed her spoken words into the sound of the voice you hear when your frontal lobe isn’t functioning. Her closing piece did indeed incorporate my bird (noise?) piece into multidimensional landscape where slowly looping chorale-like vocals rose to several crescendos before morphing dramatically into a texture that included percussive effects and (more) bird song from Layton. The whole set was a thoughtful and engaging blend of techniques and technologies.

I wonder if “noise” as Houston has come to know it is due for yet another wave of creative development. For a movement that is by nature very “underground” – much of Houston’s experimental artists are well documented thanks to the Internet and what I believe is a very Texan impulse to preserve history (and share some good stories) in words both written and sung. Or screamed. Houston is a comfortable and nurturing place for experimental artists. And there are probably many reasons for that fact that I have yet to sort out.

(Special thanks to Joseph Benzola, Douglas Henderson, Mark Kemp, Daniel Salazar, Ryan Supak, John Stone, Yet Torres, and Michael Vincent Waller for their sharing with me their thoughts on noise.)