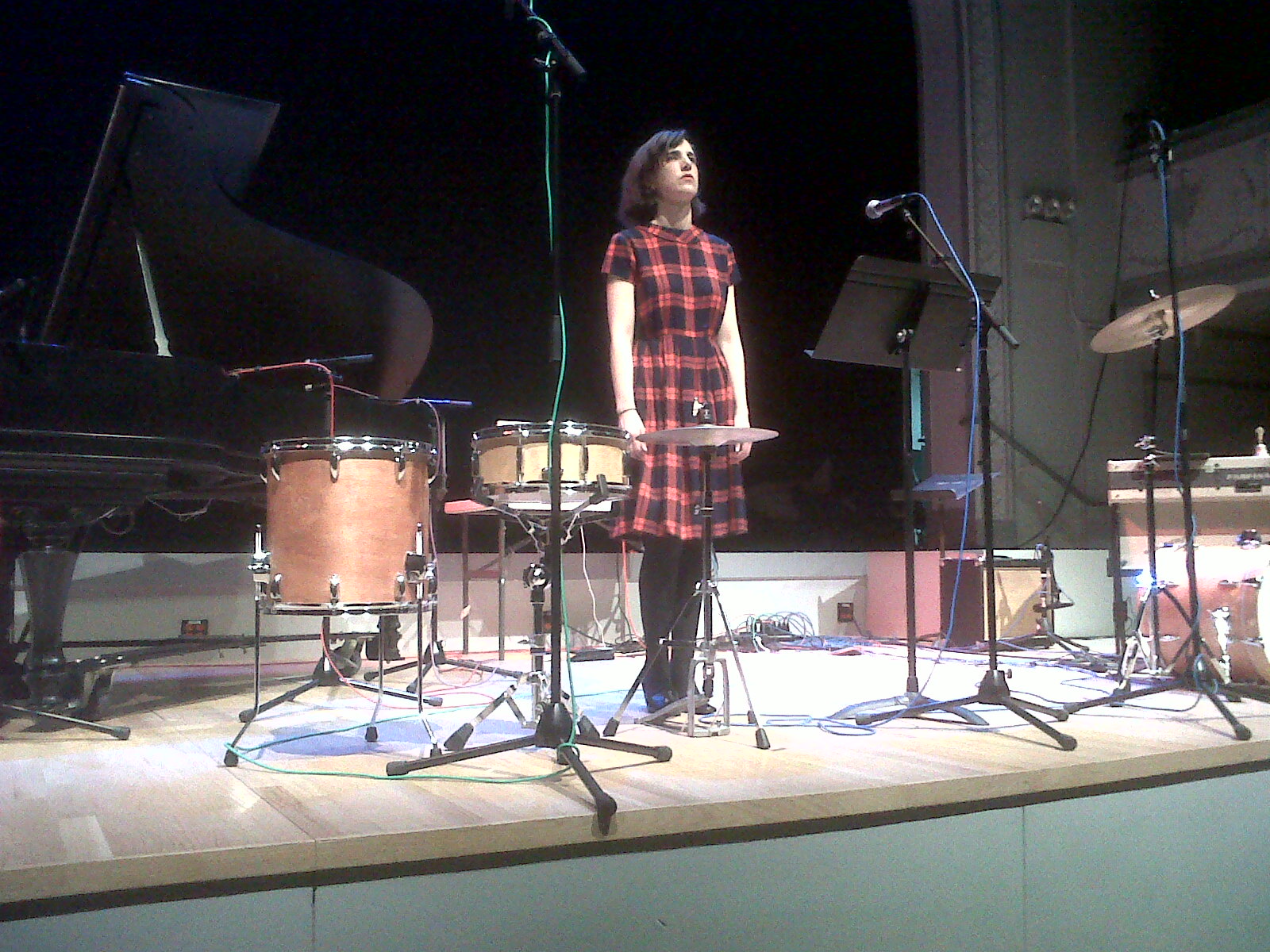 I guess there was no better way to kick off the Vital Vox Festival than with a primal scream. Gelsey Bell and her partner for this performance, composer/performer Paul Pinto, actually gave us several of them separate and together at the start of the song cycle Scaling, and they seemed to be the sound that signified both the power of vocal performance and the experimental nature of the festival as well.
In general, the festival is a huge emphasis on artists that recognize the human voice as an instrument, an instrument that has just as much range and capability as any great violin, piano or guitar, and works wonderfully as a duet with other instruments or other voices. These artists are all equally gifted as vocalists as they are composers or musicians of other instruments, and they all put on compelling performances.

Night One: Vocals and Keys

Bell started the festival with a song cycle that was an artist’s display of going against a normal piano song set. After the screams, they changed shoes, and Bell performed piano in various ways other than hands in front (i.e. behind her back, from on top of the piano lying on her stomach, with her knuckles, knees and arms, from the floor, etc)–Pinto was on the stage floor placing dirt from a plant and pieces of paper inside several little sacks tied shut with strings (More about this in a second), putting foil tins and pins inside the piano for a prepared piano sound on one of the songs. For a couple of songs, Bell also switched over to a small digital synth keyboard on the floor that had a tiny microphone, in which she gave spoken word about youth foibles and piano songs (“…Every love song is for the piano, not as an instrument, but as a surface…”). Despite its feeding back like crazy, the mike seemed to spur Bell’s performance regardless.
For the last song of the cycle, Pinto handed the bags he was preparing out to the members of the audience (some of us; me being one of them), and inside was the plant dirt and a note saying “when you see the signal, come and press your ear close to the skin of the piano”. So we went onstage and proceeded with what was basically an avant-garde take on audience participation, and though I thought she would either scream again or hit a loud chord cluster to shake us, she just finished the piece quietly.

Using Wii remotes and a laptop, Dafna Naphtali followed with her solo performance project titled {kaleid-o-phone}, a cavalcade of electronic pieces with an equally experimental vocal performance both with and without delay effects. A brief set, but she made great use of the effects and combining them masterfully with her vocalizations.

The night’s biggest reactions were saved for Judith Berkson, who previewed her forthcoming opera with a suite of demo versions of the arias titled Vor an Sicht. Berkson’s solo performances on vocals, minimal drums and percussion, organ and piano (accompanied with some pre-looped drums and vocal parts), gave everyone a taste of the final scoring with drum core, organ and children’s choir, but this solo performance seemed to be in and of itself another unique work of its own, and hopefully will still be after the opera is published.
Berkson’s cantor-trained voice lent much authenticity to the liturgical nature of the work, and the combination of the a cappella choral music with the sound of visceral drums promises a striking piece for the opera stage.

Toby Twining Music kicked off night two with a rather puzzlingly joyous sound due to the fact that one just doesn’t expect such a feeling towards music that uses “notes between the cracks of piano keys” as Toby put it–The group seems to invoke thoughts of “The Swingle Singers meets Alarm Will Sound”.
Though the group is primarily a vocal one, they do make great use of the cello played by Malina Rauschenfels (who played Twining’s unaccompanied cello piece Schoenberg Dreaming), and she is equally productive as a member of the singing group.
By the end of their set as they performed “Yes Yes Yes!” from the recently-released CD Eurydice, the group looked excited and the audience seemed just as much.

When they aren’t busy running and functioning as artistic directors of Vital Vox, Sasha Bogdanowitsch (who also emceed) and Sabrina Lastman are also the performing ensemble SoCorpo. The duo performed their new work Inelement, a cycle that highlights the natural elements (In this work there’s a fifth one: Fire, Water, Air, Earth, and Void), and the piece was scored for vocals, autoharp (strings struck with tuning forks) and bowed psaltery (with white bows, but the forks were also used for this).
Sasha and Sabrina played so exquisitely off of each other that they sounded at times like one voice, and, like Toby Twining’s group, have a superb use of both harmony and oral shapes.

For the closer, Iva Bittova came out with with her violin, a kazoo and a mbira, and placed them on the stage as she proceeded to walk around the audience and, un-miked, utilizing the acoustics of the auditorium, filled the hall with a stunning a cappella intro to the work Wood In The Wind, sung in what sounded like Czech, English and un-worded vocal sounds. Right by the front row where I was, she picked up the fiddle and began blending in a slow but gradually building up spiccato that evolved into a manic duet between voice and violin, and punctuated with occasional foot stomps, the piece was in full force.
Bittova also played a section with mbira, and another one with kazoo, with which she proceeded to provide the audience with intentional laughs as she gave an unusually comical side of herself and performed a mock jazz vocalization and pantomimed a trombone slide.
Bittova wrapped up with one last exciting violin piece and was given the festival’s only standing ovation.

A very fascinating and exciting show on both nights, I hope that we see even bigger turnouts and the need for even bigger venues for Vital Vox in the years to come.