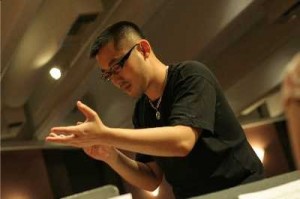 On January 10 I had the pleasure of attending a performance of Huang Ruo’s music at (le) poisson rouge. I’ve been a fan of Huang Ruo since 2007, and I was particularly interested in hearing his most recent string quartet, having missed the Chiara Quartet’s premiere last season. This performance was given by the excellent Momenta Quartet (Emilie-Anne Gendron and Alex Fortes, violins; Stephanie Griffin, viola; Michael Hass, cello).

The quartet’s title, Calligraffiti (a fusion of the words “calligraphy” and “graffiti”) is meant to reflect the composition’s autobiographical nature: Huang Ruo grew up in China and moved to New York City as a young adult, so Chinese calligraphy and  urban graffiti are among the visual images that have influences his aesthetic sense.

In order to describe his compositional approach, Huang Ruo has coined the term “dimensionalism,” which he describes as an organic integration of Chinese folk, Western avant-garde, rock, and jazz. Despite his own description, none of these styles is immediately recognizable in his music. This is good, because Huang Ruo’s unique musical voice is far more interesting than any obvious allusion to the above mentioned genres. Whichever styles he draws upon is really his own concern; what is compelling about his music is its vitality, inventiveness, and extreme emotional expression.

The quartet’s three movements run without pause. The first two movements lead the listener on a journey through rugged musical terrain: expressionistic glissandi, tones clusters, and driving rhythms. Huang Ruo builds an almost uncomfortable level of emotional tension by means of  long sustained drones with microtonal fluctuations alongside periodic outbursts of dissonance. The drones eventually transform into high pitched screams in the violins as the lower instruments come together in a powerful, seemingly unstoppable rhythmic motive. In the third movement the listener’s perceverance is rewarded with the emergence of a sublime melody (built mostly of fourths and fifiths) that is gently passed from player to player until it dissolves into a single high harmonic at the end.

Also on the program were Book of the Forgotten, a playful and virtuosic work for clarinet and viola (performed by clarinetist Vasko Dukovski and violist Stephanie Griffin) and excerpts from Huang Ruo’s recently composer opera, Dr. Sun Yat-Sen (performed by soprano Fang Tao Jiang, tenor Laurence Broderick, Ensemble FIRE, and the Momenta Quartet).