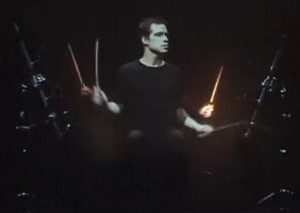 Last night Steve Reich, the Bang on a Can All-Stars and red fish blue fish appeared in front of a full Disney Concert Hall as part of the LA Philharmonic 2011/2012 Green Umbrella series of contemporary music. Steve Reich was warmly greeted by an enthusiastic audience and performed the first piece Clapping Music along with percussionist David Cossin.

Clapping was followed by Video Phase an updated version of Reich’s 1967 Piano Phase. This was created by David Crossin in 2000 by playing the piece on MIDI percussion pads that trigger piano samples of the notes. A prerecorded video of this was projected onto a screen while Cossin played the percussion pads live, varying the tempo and pattern. A video feed of Cossins’ live playing was then superimposed onto the recorded video in such a way that the movement of the mallets could be seen going in and out of phase with each other as the piece progressed (see photo). This was particularly effective in showing how Piano Phase unfolds and the playing was brilliant, bringing out all the detailed complexities and cross-patterns that make this piece a classic. The appreciative audience demanded a curtain call from the breathless Cossin who had clearly put in a heroic effort.

The Los Angeles premiere of 2X5 followed. Composed in 2009 and scored for piano, bass guitar, electric guitars and drums, the piece can be played against a recording by a single group of 5 instruments or, as in this performance, by two identical 5-piece groups. The rock band scoring represents something of a departure for Reich but the piece contains the rhythmic structure and materials we have come to expect from his music. I first became familiar with 2X5 when Reich generously made the recorded elements available for a re-mixing contest on the Indaba Music website. The careful mixing of the full recorded version has doubtless spoiled me – the live performance to my ears lacked a certain sharpness and punch. The bass guitars sounded muddy and the listening was always improved when the drums entered, giving the texture some welcome clarity and pop. But the groove inherent in the piece broke through and I could see many of those in the audience around me clearly enjoying the interplay between the musicians on the stage.  A long and cheerfully noisy ovation preceded the intermission.

Music for 18 Musicians closed the show and here the sound issues became more distracting. I have listened to this piece dozens of times through headphones and I hear something new in the details each time – it is a landmark piece and has withstood the test of time. I love this piece – and Bang on a Can obviously knows how to play it – but somehow the experience I had in Disney Hall seemed out of balance and uneven. At each transition the change in texture seemed to put the ensemble sound into confusion. The players worked hard to sort it all out, but from where I was sitting the overall result was inconsistent. I have heard Music for 18 Musicians performed live before, achieving a realization on a par with the recording, but sadly this was not the case this time. All of the instruments were playing into microphones, so perhaps the decision to use a sound system in a concert hall should be revisited next time.  Music for 18 Musicians makes me want to tap my foot, bob my head and sing along – it has that kind of groove – but as I looked around most of the people listening were frozen still. A long and loud standing ovation followed, no doubt in appreciation of the fine music that Steve Reich and Bang on a Can has given us over the years.