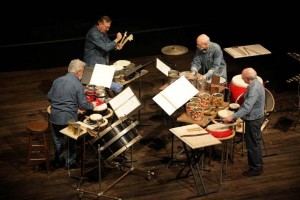 The renowned percussion group NEXUS, consisting of Bob Becker, Bill Cahn, Russell Hartenberger and Gary Kvistad made a Southern California appearance Friday night before a noticeably full Samuelson Chapel at California Lutheran University. A bewildering array of xylophones, marimbas, bells, cymbals and drums of every description crowded the stage for the two hour performance. NEXUS has been making contemporary music since 1971 and has been a presence worldwide.

The entire first half of the concert was devoted to the music of Steve Reich, starting with his Music for Pieces of Wood written in 1973. This is performed on tuned wooden claves and is an example of Reich’s process of ‘rhythmic construction’. One player keeps a steady pulse while the others come in at intervals with short patterns that are offset from each other by several beats. The process in Music for Pieces of Wood consists of three sections with patterns of six, four and three beats. The acoustics in the chapel tend toward reflection and there was no trouble hearing the claves, even in the balcony where I was sitting – if anything the sharp crack of the lowest register clave became overwhelming at times, blurring the rhythmic patterns of the process. The finer details in the rhythms were best heard at the lower dynamic levels.

The second piece, Mallet Quartet, is more recent Reich dating from 2009. This was played on two marimbas and two vibraphones. The program notes quote Steve Reich: “The marimbas interlock in canon, also a procedure I have used in many other works. The vibes present the melodic material, first solo then in canon.” A good groove was, in fact, established by the marimbas but at times the sound coming from the vibes overwhelmed the pulse. The slow middle section sounded more coherent and had better definition. The precise playing of NEXUS was almost enough to counterbalance the hall acoustics in the fast outer movements, but dialing back the volume might have produced better results.

The first half of the concert closed with Drumming, a 1971 piece by Reich that was played on a set of carefully tuned bongos. A single steady beat is established by two players and this is built up in complexity as players are added. The precision of NEXUS quickly became evident as the tempo increased and as phasing was introduced into the more complex rhythmic patterns. The higher pitch in the bongo set used here was less affected by the acoustics and the results were gratifying. It was intriguing to watch the players – their arms barely moved below the elbow and the rapid drumming was done almost effortlessly by wrist and hand. This piece has a very African feel and reflects the influences that Reich had absorbed during his 5 week study of drumming in Ghana just prior to composing this piece.

After intermission the second half began with Fra Fra, a piece inspired by the folk rhythms of the FraFra people of West Africa as arranged by NEXUS. A ‘talking drum’ was featured whose pitch could be varied by squeezing the flexible frame surrounding the hour-glass shaped body. Other drums, shakers and panpipes were part of the ensemble – all of which created a strong groove. The panpipes added a melodic touch and sometimes a whistle-like sound that, combined with the strong beat, brought rap music to mind.

Tongues followed, another African-inspired piece arranged by NEXUS, this time from Zimbabwe. Tongues was played on the mbira, an African instrument known better here as a ‘thumb piano’. The mbira produces a soft metallic sound similar to a music box and the peaceful melodies in this piece were a quiet contrast to all the intense drumming that had been heard up to this point. In fact two mbiras were used – the higher Shona mbira and a bass mbira from the Caribbean. These were accompanied by a softly-struck wooden block and a gentle rattle. The overall effect was subtle and serene, a melody that seemed content with its simplicity.

A time of improvisation followed and the only rule was that any player could play anything on any instrument at any time. This seemed a recipe for ear-splitting chaos but improvisation has been a feature of NEXUS concerts for 41 years and the results were impressive. The piece started quietly with various bells, bowls and blocks and developed a sort of zen feel. This morphed into a kind of urban street-scape complete with car alarm. All sorts of items were used: a bunt cake mold was struck and a chair was dragged across the wooden floor of the stage. There was a breath-operated organ that held a long drone, various bird calls and the slow scraping of cymbals. The result was agreeably alien and not strictly percussive – a sort of sonic journey that reminded me of what JC Combs creates. Most interestingly, this piece was greeted by sustained applause from the audience who had clearly connected with the concept.

The concert concluded with a series of ragtime pieces featuring mostly the music of George Hamilton Green, an early 20th century composer for the xylophone. These were expertly played and varied from formal, almost classical-sounding pieces to popular music of that time. A standing ovation followed and an encore of virtuosic xylophone music finished a full evening. That so many people came out to see a contemporary music group and listen to an hour of music by Steve Reich is an encouraging sign for all of us here in SoCal.

2 thoughts on “NEXUS In SoCal”