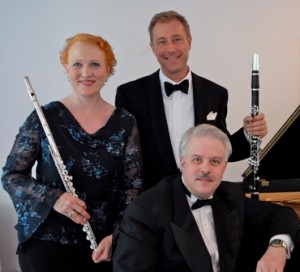 The critically-acclaimed Palisades Virtuosi presents a very special 10th Anniversary Concert – the first concert of their 2012-2013 season on Friday, November 9 – 8:00 PM at the Unitarian Society of Ridgewood, 113 Cottage Place in Ridgewood, New Jersey. The evening will also include a pre-concert composer and performer talk at 7:15.

Flutist Margaret Swinchoski, clarinetist Donald Mokrynski and pianist Ron Levy began their series of concerts in Ridgewood, New Jersey in 2003, when there were relatively few works composed for their instrumentation. So, their “Mission to Commission” was born. 10 seasons later, there are an additional 60 works of concert repertoire for their ensemble as a direct result of their mission. They include a commissioned work in each of their concerts.

November 9 concert repertoire will include the World Premiere of composer Jeff Scott’s Poem for a Lost King, commissioned by The Palisades Virtuosi.

The composer writes, “Lost King is a musical poem that has been written as a metaphorical homage to the countless African kings, chiefs and village elders expelled and abducted from their homeland during the middle passage.” Visit Jeff Scott at http://www.imaniwinds.com/artist.php?view=bio&bid=1941.

Tickets for the November 9 concert are $20, $15 for students and seniors and $10 for children age 12 and under. For tickets or more information, call 201-488-4983, visit http://www.brownpapertickets.com/event/286276 or email reservation requests to the Palisades Virtuosi at palisadesvirtuosi@gmail.com. For directions, go to this link.

Volumes One, Two, Three and Four of the Virtuosi’s New American Masters CD series are available from Albany Records.