On Friday, February 22 the week-long 2013 residency of Tom Johnson in Los Angeles was capped off with a concert of his music at the wulf, an experimental performance space deep in the gritty heart of industrial downtown. Featured was the Los Angeles premiere of  ‘Clarinet Trio’ and four other works, plus the occasion was also marked by the release of a new CD of Tom’s works titled ‘correct music’ from Populist Records. About 50 people crowded into the reclaimed factory loft to attend the event and what the wulf lacks in amenities was more than compensated by the enthusiasm of the young audience. The concert was free and there was an ice chest full of  Tecate beer – what’s not to like?

Tom Johnson’s time in Los Angeles this past week was spent giving lectures on mathematics and music at Cal Arts, hosting an exhibition of his drawings in the Art Share LA gallery and presiding over concerts of new music. Tom has deep minimalist roots and, according to the concert notes, “works with simple forms and limited sonic materials, utilizing logic and mathematical models in both his music and his drawings.” 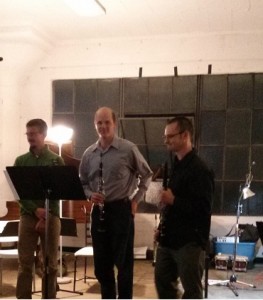 The concert began with Clarinet Trio, performed by Jim Sullivan, Brian Walsh and Damon Zick. This piece consists of a series of short passages with changing sets of three note chords separated by short pauses.  Tom Johnson uses mathematics and sets of drawings to describe his intended sequence of the various permutations of musical sound and these are then translated into the written score and parts.  Clarinet Trio was constructed to explore the possible ways of playing seven different three-note chords and this took about 20 minutes to unfold. The different segments varied in rhythm, attack, dynamic and tempo but the ensemble playing here was very tight and each phrase was cleanly played with good intonation. The acoustics of the small space at the wulf were well-matched to the musical forces and those listening were very attentive during  the Trio – even the 5 second pauses between phrases became familiar after a few minutes. The occasional horn blast from the nearby freeway made its way inside during the silences, but this was not a distraction. The premiere was well-executed by the performers and well-received by the audience.

The second piece was Eggs and Baskets, a narrated piece that is similar in construction to Tom’s Narayana’s Cows. The idea in Eggs and Baskets was to musically describe all the possible ways to put six eggs in two baskets. The two baskets were represented by a viola, played by Andrew McIntosh and a clarinet played by Brian Walsh – as the narration progressed each player sounded a series of notes representing the number eggs in his ‘basket’. The interplay between the viola and clarinet thus became increasingly varied as the permutations grew, with notes trading rapidly back and forth within the same phrase – but this was cleanly done and very effective. The narration by Douglas Wadle nicely connected the playing to the concept, making for an enjoyable piece.

Trio for Strings followed and this set out to play “all possible 3-note chords adding to 72 where C = 24” – some 280 combinations altogether. This was a smooth legato sound of rapidly changing tone combinations, often dissonant. I found that my ear would follow one or the other string players for a time, the chords that sounded were brief and constantly changing. The pitch discipline of the string players was impressive as each tone typically did not bear any familiar relationship to those around it. Hearing this piece is like listening to a computer roll through the possible permutations of a pitch set and it gives a striking example of just how small a subset our traditional tonalities are of all the possibilities that are available in the equal-tempered scale.

Tilework for Piano followed and this was played by Dante Boon, the Dutch composer and pianist. This was similar to Clarinet Trio in that it consists of a series of short phrases built from a limited number of tones, separated by short pauses. The piano gives this piece a more introspective feel and I found my ear tended to concentrate more on the patterns than the pitches or timbre. A concert presented by Mr. Boon will be given at the wulf on February 28. 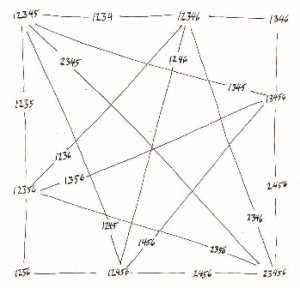 The concert concluded with Eight Patterns for Eight Instruments, and the musical forces used for this performance were sax, piano, violin, clarinet, accordion, guitar, flute and oboe. There is a video of this piece on YouTube as played mostly by strings but the use of winds here yielded a brighter, more accessible sound. ‘Eight Patterns for Eight Instruments’ consists of eight short segments of scales and simple chord patterns. This music is as close to the classic minimalist style as was heard during this concert and the eight instruments played tightly together, filling up the space with a well-balanced sound. A sort of warm optimism radiates from this piece that is appealing and, if anything, too short.

This concert was a good illustration of just how fully grounded is the music of Tom Johnson on the mathematics of combinations and permutations. Rarely has a music been so rigorously architected – the drawings that Tom uses to structure his work look very much like a set of drafted plans or a chemical diagram for a complex molecule.  Other minimalist composer’s of Tom’s generation incorporated repetition and gradual changes in rhythmic patterns to realize their music. Tom’s music stands out because of his use of an entirely different mathematical space to guide the structure of his works.

Further information about upcoming events at the wulf is available here.

More about the exhibition of Tom Johnson’s drawings at Art Share LA can be found here.