More From The 2013 Ojai Music Festival 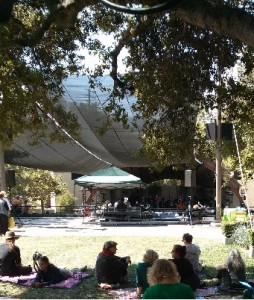 The 2013 Ojai Festival continued its look at American composers with a performance of Suite for Symphonic Strings by Lou Harrison on Saturday, June 8 in the Libbey Bowl. A 24-piece orchestra comprised of the Mark Morris Dance Group Music Ensemble and the American String Quartet filled the stage with a strong presence. Joshua Gersen conducted.

Suite for Symphonic Strings is an assemblage of pieces composed at various times in Harrison’s career, and is loosely based on allusions to the Greek gods. One of his most-performed pieces, Suite for Symphonic Strings reflects a diversity of influences. The dance-like first movement Estampe and the fourth, Ductia: In Honor of Eros, clearly betray the Asian influences that Harrison absorbed as a West Coast composer. Other sections, such as the second, Chorale: Et in Arcadio Ego provide a warm, open sound full of lush harmonies. Still others such as number five, Lament and nine, Nocturne are poignant and quiet while number three, Double Fugue: In Honor of Heracles, has a anxious edge. It is a piece that is rich with a variety of feelings and emotions and these were put across effectively by the string orchestra.

During some of the quieter moments in the piece the inevitable outside noises of kids playing in the park, or the band playing in a nearby bar could be heard, but these did not detract decisively from a fine performance of Harrison’s lovely music.

After a short intermission For Lou Harrison by John Luther Adams was performed by the same string ensemble, but this quickly became problematic. Full disclosure – I am a big fan of this piece and was excited when it was programmed for this year’s festival. This performance, however, suffered from too much sound coming from the big orchestra. The beginning arpeggios washed over the listeners like a tidal wave and became relentless as the piece progressed.

The notes and tempo were correct – and what I heard certainly resembled the piece I love – but too much of the intimacy and sweetness of the piece was lost in the translation to larger musical forces.  It seemed to work best when at the lower dynamic levels and there were occasional flashes of the beauty that this piece contains. But much like the sacred music of Bach, For Lou Harrison is too much the chamber piece to be scaled up to the level we heard in this performance.  Additionally, the outdoor venue became quite chilly in the late evening after a long day of warm temperatures and this didn’t help the concentration of the listeners or the conditions for the musicians. The length of the piece, with all the players playing most of the time, eventually became wearing and the audience was visibly restless as the final chords sounded. 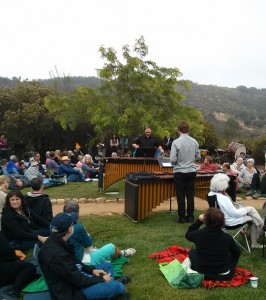 A much more satisfactory outcome was heard the following morning with the performance of songbirdsongs, another outdoor piece by John Luther Adams. The venue this time was Meditation Mount, a local Ojai landmark about 5 miles out of town. The location was high along a narrow winding road and buses were required to take the listeners up to a small promontory that overlooks the Ojai Valley. About 200 early-risers packed themselves into a performance space just a few dozen yards across. Red fish blue fish and two brave piccolo players formed the smallish ensemble. Percussion stations were scattered around the area and the players moved about as necessary for each section.

Written over several years (1974-79 and revised in 2006) and as the title indicates, songbirdsongs is a series of musical realizations of bird calls. As the program notes describe, the players are to “play with the free intonation and inflection of bird songs, not in exact temperament. Time should also be free and fluid…”

The nine sections of the piece are titled after the names or characteristics of various birds and evoke a wide variety of natural sounds. The piece proceeds with a back and forth calling of rapid, bird-like phrases between the piccolos. Other percussion pieces join in, generally at a low dynamic, and convincingly portray the familiar landmarks of a woodland or meadow. The music and the surroundings actually seem to merge together in the mind of the listener.

There are regular pauses in each section – and with the audience sitting stone silent – the natural sounds of the environment became part of the performance. This was remarkably effective – as a city fellow I don’t pay much  attention to the sounds of nature – but during the pauses in this piece I suddenly become aware of all of the birds in the surrounding trees calling back and forth. I am no naturalist but it seemed to me that some of the local birds were actually answering the piccolo calls. I talked later to one of the piccolo players who said that a bird swooped down and buzzed by her head during one passage.

The integration between performance and nature was virtually seamless and the audience agreed that this was an experience far beyond that found in the average concert hall. Music, intention and venue met successfully in this performance of songbirdsongs and it makes a powerful case for the direction John Luther Adams has taken with his art.

More information about the 2013 Ojai Festival is here.