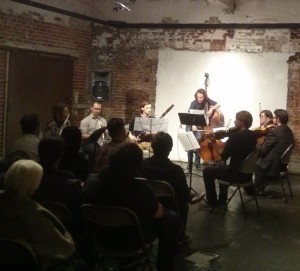 On Tuesday, January 21, 2014 several of the lesser-known works of composer Alvin Lucier were performed by the Southland Ensemble at Monk Space in the Koreatown district of central Los Angeles.

About 35 people attended with only a few empty seats in the compact venue that also doubles as a movie and video location. The reclaimed brick and cement interior of Monk Space was ideal for hearing Lucier, whose work is strongly informed by the relationship of sound and space.

The acoustic space, electronics and flute were all in good balance – and this was essential to bring out the often subtle sonic interplay. Afterward, Ms.Tavolacci explained that the various effects were all carefully scored and she used alternate fingerings and rolled the barrel of the flute slightly in order to bend the pitches when needed. The pitch control by the flute was impressive, considering that it was being continuously compared by the audience to a series of steady electronic tones.

The second piece on the program was Theme (1994) and this was scored for four voices and sonorous vessels, on 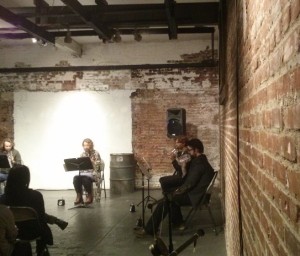 poems by John Ashbery. Each of the four voices spoke into a wide-mouth glass jar that was fitted with a microphone pickup and connected to a small portable amplifier.  The John Ashbery poem – Skin, Meat, Bone – was recited into these jars, sometimes by a single voice and sometimes in various combinations of multiple voices. The words could occasionally be made out, but text was not distinct – and this was intentional. The jars muffled the words but tended instead to amplify the various tones and frequencies present in the speaking voices.

The result was that the cadences of the text and the patterns in the poetry produced a sort of dreamy tone cloud that hovered around the voices, changing in color and duration depending on what was being spoken at that instant. The varying voice combinations and registers created different intensities and textures from moment to moment and the effect was quite remarkable given the simplicity of the concept. This would seem to be an extension of Lucier’s well-known work from 1969, I am sitting in a room, where the spoken text is recorded, played back and the re-recorded many times in the same room. Eventually the words are lost but the characteristic sonorities of the space are distilled into the tape. The amplified jars in Theme seem to doing something similar to text spoken in real time.

Wind Shadows (1994) followed, and this was similar in structure to the opening flute piece. In Wind Shadows a constant electronic pitch was heard from the speakers, varying only slightly in volume. A single trombone matches the pitch, or plays slightly above or slightly below it. Sometimes the electronic pitch dominates, other times the trombone – and as with 747, your ear tends to hear one or the other. The effect is spare, but warms noticeably when the trombone dominates. The lower register of this instrument was particularly powerful when zero-beating occurred – it sounded like a flight of B17 bombers passing overhead. Trombonist Matt Barbier used two slide positions to match the electronic tone – one giving more control for bending the pitch upwards and the other better for slightly lowering to the zero-beat frequency. As with all these pieces, the balance between the electronics, the acoustic space and the players was excellent.

After a short intermission Septet (1985) was heard and this work is also along the lines of 747 and Wind Shadows, but with larger musical forces. A single electronic tone from the speaker system was matched by three winds and four strings: bassoon, clarinet, flute, bass, cello, viola and violin. The instruments entered in various combinations and sequences, rising and falling in intensity, creating a constantly changing spectrum of sounds. The assortment of timbres and the power of the ensemble against the steady electronic tone produced a fine variety; where the tones were dissonant, the effect was ominous, while at other times there was a feeling of tension and suspense  or a sad mournfulness.   There was even one section that, to my ear, sounded just like a train horn in slow motion.

The final offering for the evening was Outlines of Persons and Things (1975) and this was a sound installation for microphones, loudspeakers and electronic sounds. An electronic tone was put out through the PA system and two specially positioned auxiliary speakers. These were arranged in such a way as to produce different sound patterns throughout the space. The audience was invited to walk about the space and in so doing altered these wave patterns. The result was that in some areas there was no sound, in others a definite pitch and yet by walking just a few paces it all changed. My smart phone tuning app seemed to think the sound in the speakers was pitched to B (247 Hz) but changing my position by just a foot or two altered this pitch considerably. 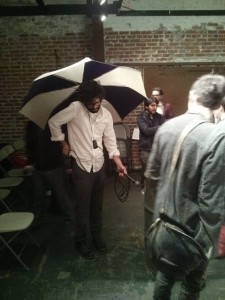 There was also a sound scanning feature. A portable microphone and amplifier were carried about to detect the pitch present in a given place and then amplify it outward, thus further altering the local sound patterns. Scanning irregularly-shaped objects – two 55 gallon drums were placed in the space – produced complex patterns and unexpected pitches nearby. Outlines of Persons and Things was a powerful demonstration of the hidden acoustic possibilities that are present in any given space.

This concert by the Southland Ensemble of works by Alvin Lucier, successfully realized at the boundary of music and acoustic science, provides us with a rare glimpse of the many creative possibilities that await us there.