A Concert by Gnarwhallaby in Pasadena 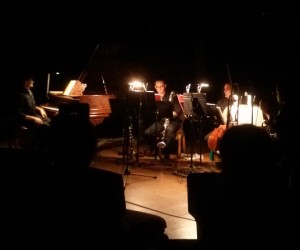 On Wednesday, March 5, 2014 at the Neighborhood Church in Pasadena, the group Gnarwhallaby presented a concert of music by Klaus Lang, Andrzej Dobrowolski, Edison Denison and three contemporary Los Angeles area composers. Gnarwhallaby consists of Brian Walsh on clarinet, Matt Barbier on trombone, Derek Stein playing cello and Richard Valitutto at the piano. The sanctuary of the church was mostly full and provided a comfortable venue that encouraged concentration by virtue of being completely dark, save for the lights on the music stands of the performers.

The first piece was Die Kartoffeln der Königin (1999) by Klaus Lang. The title translates to roughly “The Potatoes of the Queen” and this began with an extended silence by the performers before the first low, deliberate note was sounded in the cello. This was answered in an equally low register by the piano and this call and answer pattern was joined, at length, by the clarinet and trombone With the entire room enveloped in a solid darkness it was easy to imagine being underground. As the piano continued to sound deep notes, the other instruments generated a soft cloud of light buzzing that added to the sense of being beneath the surface of the earth. This is quiet music, but it was effective in working on the imagination so that as the soft buzzing subsided at the finish, one could fairly claim the experience of having been buried deep in garden soil.

The second piece was Krabogapa (1970) by Andrzej Dobrowolski and this began on a sharp note from the clarinet that was soon joined by the trombone.  A series of loud trills, followed by silences, built a sense of mystery and tension that was relieved at intervals by loud crashing chords in the piano and frenzied arpeggios in the instruments. This alternated with soft repeating figures, the quiet strumming of the piano wires, a light tapping or knocking sound that created a sense of slowly feeling one’s way in the dark while building up an expectation of the next blow. The loud screams and frenetic runs by the instruments were all tightly orchestrated and carefully played so that the contrast with the quiet sections was especially evident. Although the piece ended quietly, the roller-coaster effect of loud and soft sections was memorable.

d – s – c – h (1969) by Edison Denisov followed, and this had a more angular sound starting with the sharp opening note from the piano. With alternating sections of stringendo and legato, signaled by the starting piano note, the overall feel is tight and excited. This was music with sharp edges – even in the slower sections – but precisely played.  Lion and Wolf (2013), a piece written for Gnarwhallaby by Andrew McIntosh was next and this opened with a more organic sound from the sliding trombone. A nice interplay between deep piano chords and the instruments provided a steady forward movement. This gave way to syncopation and a stretch of exotic rhythm that was complimented by high tones in the clarinet. When a slower tempo eventuated, the striking harmonies evoked a somewhat melancholy feeling, but Lion and Wolf was perfectly programmed to follow the Denisov piece. 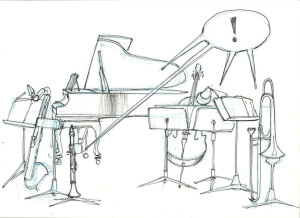 Susurrous (2011-12) was next, another piece written for Gnarwhallaby, this time by trombonist Matt Barbier. Although this piece began with sharp sounds from the clarinet and cello, it soon settled into a quiet, deliberate pace that allowed some delicate and lovely harmonies to evolve. The softness and subtlety was almost Feldmanesque and the overall effect was like a gentle breeze blowing through a structure, whispering to the listener in quiet tones.

This set the stage for the final work of the evening, the West Coast premiere of Lullaby 4 (2013) by Nicholas Deyoe.   Lullaby 4 begins innocently enough, with a quiet piano line creating a mood that is a combination of ominous and mysterious. But just as you are settling in, an explosive chord shatters the quiet – like hitting your head while crossing a darkened room. The piano returns with a soft melody, but there are deep growling sounds in the cello and trombone, like some beast lurking below. A series of rugged sounds from the cello deepens the sense of mystery and adds to the tension. Again a crashing piano lick shatters the moment before returning again to quiet.  At one point Matt Barbier could be seen applying the edge of an upturned wine glass to the rim of his horn, creating a sinister sound of unseen movement. These moments of increasing tension were the perfect prelude to the thunderous chords that flashed by at unexpected intervals. The style of this piece would seem to owe something to Dobrowolski’s Krabogapa, with alternating periods of quiet and sharp, short moments of chaos. Listening to Lullaby 4 is like walking down an unfamiliar alley in the dark and being attacked by an unseen assailant – definitely music to keep you on the edge of your seat and an emotionally draining experience.

This music presented in this concert spans over forty years and included three recent pieces from Los Angeles-based composers. This performance of what, by any measure, are technically difficult works was efficiently executed by Gnarwhallaby and further concerts by this group should be sought out by all those interested in state-of-the-art contemporary music here in Southern California.