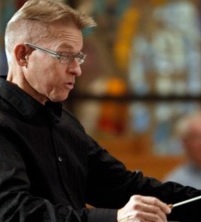 On Saturday April 5, 2014 Jacaranda presented The Knee Plays by David Byrne along with music by Philip Glass. This concert was one of the Minimalist Jukebox Festival concerts of the Los Angeles Philharmonic and also part of the tenth anniversary season of the Jacaranda series. The venue was the First Presbyterian Church, whose ample and comfortable sanctuary was almost completely filled for the occasion. The Lyris Quartet, the Calder Quartet, Jacaranda Chamber Ensemble and the Vintage Collectables brass band with drummer M.B. Gordy provided the musical forces.  Actor Fran Kranz was the narrator for The Knee Plays and Mark Alan Hilt, Music Director of Jacaranda, performed on the pipe organ and conducted.

The concert opened with Mad Rush (1979), by Philip Glass, an organ work first performed publicly in 1981 at St. John the Divine Cathedral to mark the visit of the Dalai Lama to New York. This piece opens with a light, calming sequence as soothing as any Sunday morning prelude. After a sailing serenely on for minute or two, however, it erupts into a swirling vortex of sound full of drama and energy that calls to mind later sections of The Grid from Koyaanisqatsi. Mad Rush proceeds along in this way, alternating sections of quiet serenity with moments of loud striving frenzy, reflecting a Buddhist sensitivity to contrast and no doubt calling us to a more contemplative state of mind. The sound of the pipe organ filled the sanctuary nicely and the playing of Mark Alan Hilt was especially precise in the faster sections. There are many recordings of Mad Rush on piano or keyboard, but hearing this piece performed live affirms the raw power of this music when heard in its intended venue.

The second work on the program was a suite from the musical score of the film Mishima (1985) composed by Philip Glass and arranged by Todd Levin. The opening section begins with a beautiful shimmer of glass and bell chimes. The lower strings join in to build an ominous undercurrent that is reinforced by a strong beat in the bass drum. This increases in tempo and dynamic, ultimately bursting into a familiar Glass groove carried forward by the strings. Mishima is the complex story of a post-war Japanese writer who plots the return of the Emperor to power by building a private army. The percussion section was especially effective in conveying this militaristic element, as was clearly heard in section 2 by a series of rapid snare drum rolls – the feel is very much like an army on the march. Other parts of the Mishima story are similarly vivid and range from lighter and empathetic as in section 3, 1934: Grandmother and Kimitake, to unsettling and broad in the last section, November 25: THE LAST DAY. For those sections that consisted entirely of string playing, conductor Mark Alan Hilt stepped aside and let the ensemble work out the complex patterns of notes that are the hallmark of music by Philip Glass. The playing throughout was skillful and the harmonies could be heard distinctly, even high up in the balcony. The effort was received by the audience with sustained applause – with many standing.

After intermission the Vintage Collectables brass band took the stage for The Knee Plays (1984) by David Byrne. The Knee Plays was written to be performed between acts of Robert Wilson’s expansive opera the CIVIL warS, partly as a way to cover scenery and costume changes. For this concert however, all the sections of the The Knee Plays were played consecutively. The opening section Tree (Today is an Important Occasion) began with a lovely series of tones played in sequence by two trombones. To these were added saxophones and the result was a pleasantly grand sound that did convey a sense of occasion. The narration by Fran Kranz commenced, but immediately there were technical issues with the sound system, rendering the words unintelligible. The performance was halted until a repair could be effected, and this was right decision inasmuch as the narration provides an essential context for the music. The fix proved only partly effective, however, and even a change of seats to be closer to the speakers still required intense listening to catch all of the spoken words. The brass band was clearly heard and well balanced – but too much for the overwhelmed narration. 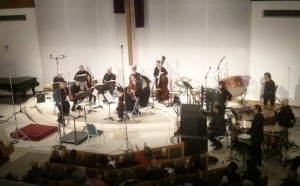 David Byrne is best known as a founding member of the band Talking Heads and the music of The Knee Plays brings a comfortable sense of the familiar with it. The second section, In the Upper Room, surely owes something to a hymn tune. I Bid You Goodnight, section 8, could have been an easy-going New Orleans street band piece. All of the tunes in The Knee Plays are highly accessible and Byrne clearly has a good ear for texture. Each of the sections provided solo opportunities for the various horns and combinations and these were effectively realized. The playing was cohesive and consistent throughout the 50-plus minute run time – an achievement of note considering that all the instruments were called upon to play most of the time.

On those occasions when the narration could be heard The Knee Plays really came into focus. Things to Do (I’ve Tried), the ninth section, is a spoken list of simple chores accompanied by the blues, but the juxtaposition produces a knowing, inward smile by anyone who has attempted the mundane and failed. Perhaps the most successful piece was section 12, In the Future. The narration consists of a series of utopian platitudes about how wonderful the future will be – “In the future we will work one hour a week!” – accompanied by a marvelous 1950-ish science fiction soundtrack carried by the lower brass. This was a telling commentary on our 21st century, given that this work dates from 1984, and provided a glimpse of just how effective the music of David Byrne can be. The strong applause from the audience at the conclusion rewarded a fine effort.

The tenth anniversary season of the Jacaranda series will conclude with a concert featuring the music of Mozart, Debussy and Arvo Part on Saturday, May 10, 2014 at First Presbyterian in Santa Monica.