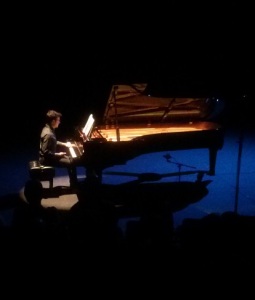 On Tuesday November 11, 2014 Piano Spheres presented a concert by Richard Valitutto entitled NAKHT. The venue was the RedCat performing arts space at Disney Hall in downtown Los Angeles, and the 275 available seats were mostly filled to hear an evening of solo piano nocturnes. This was the first major recital by Richard Valitutto, who is a member of several leading new music ensembles that appear regularly throughout the city.

The concert opened, appropriately enough, with Nocturnes (1929 – 38) by Francis Poulenc. Five nocturnes were played from this piece and the first of these, No 1 in C major, began with a warm and welcoming feeling and reflecting, from time to time, just the slightest tinge of regret. This piece gracefully unfolded with an accessible beauty. The acoustics in the hall were good and Richard applied a sensitive touch to the flowing melody line and its stately ending. The second movement, No 5 in D minor, has a much quicker feel, like a group of children running about inside a large house. The subtitle of this nocturne translates to “moths” and perhaps this accounts for the lively feel. The fast runs and rapid rhythms were accurately and precisely rendered while at the same time allowing the playfulness of the music to come through.

Other nocturnes from Poulenc were variously slow and stately with an introspective feel, sophisticated and engaging, like a group of friends out on the town or dramatic and expressive. The last nocturne, No 8 in G major, was softer and more reserved, almost church-like in its solemnity, but with a certain uplifting sensibility. All these Poulanec nocturnes were played with an ease and smoothness that highlighted a sense of openness and warmth.

The second piece in the concert was as above, so below (2014) by Richard Valitutto and this occasion was the world premiere. Some adjustments were required; the music rack on the piano was rotated allowing access to the strings within. As above, so below began with the plucking of isolated strings – with those in the higher registers sounded with a bell-like purity and were left hanging nicely in the air. The lower notes produced more of a clanking sound, but this made for a good contrast. The listener soon became accustomed to the use of these extended techniques, and as the piece proceeds they become a normal feature of the sound palette. Eventually notes were struck from the keyboard and this registered as a more percussive sound compared to the lovely sustained pitches of the plucked strings. A dialogue unfolds between the two sounds as the piece gradually develops into a quiet, meandering mystery. It is like a nocturnal wandering inside an old house while hearing the chimes of a grandfather clock. Based on the lunar cycle and “..simple canonic procedures like those we hear in Renaissance and Baroque music” as above, so below has a more flowing, introspective feel than its underlying structure might suggest, resulting in a pleasing level of thoughtful reflection.

Due Notturni crudeli (2000) by Salvatore Sciarrino was next and the first movement Senza tempo e scandito started with a series of strong, pounding high notes followed by a pause, a short passage and then a repeat. This became a steady, march-like pulse as the piece progressed, broken only by rapid runs that skipped down the keyboard. The feeling was quite unlike a traditional nocturne and was more reminiscent of an automaton caught in some perpetual factory process. Intimidating and impersonal, this movement only turned softer towards the end as it slowly died away. The second movement, Furia, metallo, was even more forceful, with loud pounding chords and rapid runs in the middle registers. There were a few quiet stretches but these simply served to reinforce to harshness of the more robust sections. The program notes for this piece state “…the predominating attitude is one of violence and hysteria, examining the dichotomy of disparate gestures and their pugnacious incompatibility.” The playing by Richard Valitutto was skillful throughout and carefully attuned to the strong emotions present in Due Notturni crudeli – the cruel nocturnes.

After a short intermission La chouette hulotte (1956-58) from Catalogue d ‘oiseaux, 3 Livre by Olivier Messiaen began with an ominous feel, like walking outside into the inky blackness of a cloudy night. Changing rhythms and running passages ensued, with a building sense of uncertainty and tension. The title of this piece translates to Tawny Owl, and is part of the Messiaen series of piano works that focus on birds and bird calls. He writes about this piece: “Darkness, fear, the heart beating too fast, the meowing and barking Little Owl, the cries of the Long-Eared Owl, and then there is the call of the Tawny Owl: sometimes gloomy and painful, sometimes vague and disturbing (with a strange tremor), sometimes shouted out in terror like the cry of a murdered child!” All of this is viscerally present in La chouette hulotte; at times Richard Valitutto seemed to be attacking the keyboard and at other times caressing it, artfully drawing out all of the foreboding and drama that is packed into this piece.

Next was a work by Aleksandr Skryabin, Poem-Nocturne, OP 61, (1912) and this began with a light, rolling melody accompanied by warm chords. This is a more traditional type of nocturne and is evidence of very controlled writing – there is a sense of slight tension and of something held back. Skryabin was heavily influenced by Chopin and, as the program notes state: “…during his middle years Skryabin became interested in composing ‘poems’, an appellation he derived from the late-Romantic concept of tone poem. However, unlike those heroic and tragic chronicles, most of Skryabin’s piano poems focus on the ephemeral beauty of a few simple gestures, favoring grace over grandiosity.” The delicate sense of anticipation in Poem-Nocturne approaches impressionism in its simplicity and subdued texture, and the understated feelings were all carefully articulated in this performance. 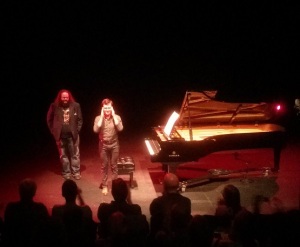 The final work of the evening was NCTRN (2014) by Los Angeles composer Nicholas Deyoe, commissioned for this concert by Piano Spheres. For this piece the piano was prepared so that the right-most key made a wooden knocking sound instead of hitting the string to make a note. This simple adjustment became an effective focal point as the piece progressed. Anyone familiar with the music of Nicholas Deyoe would normally expect to hear a thunderous roar from the piano, but apart from a few sharp chords NCTRN was a model of carefully controlled atmospherics. This is surprisingly economical music, with pauses and silences that added to a deep, evocative feel. The knocking sound made by the prepared key produced a keen sense of slowly building anticipation, becoming more insistent as the piece progressed. The sudden ending was the perfect, unexpected finish. The playing was everything NCTRN required – a fine touch with precise control that sustained the tautness throughout. The audience received this performance with sustained applause and cheering.

With artists like Gloria Cheng, Mark Robson, Vicky Ray and others, Piano Spheres has, with this satellite series concert by Richard Valitutto, recognized a new voice for the music of an upcoming generation.