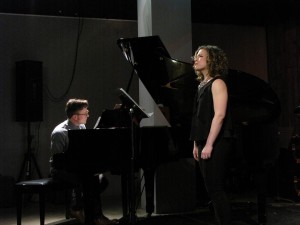 The Blue Whale in the Little Tokyo district of downtown Los Angeles was the venue for a concert entitled “The Other Side of Valentines Day” by the group Synchromy – appropriately on Sunday, February 15, 2014. A nice crowd turned out to hear an evening of original new music performed by soprano Justine Aronson, Matt Barbier on trombone and pianist Richard Valitutto. In all, some ten pieces were heard, most of them by Los Angeles-based composers. The concert programs were handed out in envelopes in the manner of a Valentines card – a clever touch that added to the convivial ambiance.

First up was Song for Justine and Richard by Nick Norton, based on a lyric by Conor Oberst. This began with some quiet notes in the upper registers of the piano that evolved into some nice harmonies as piece progressed. After some moments Justine’s voice entered with a single quiet word: “Never.” Her smooth soprano, and also the very high notes in the piano accompaniment, had to compete against some kitchen noise that occasionally intruded on the quieter sections. But the sweet, introspective feel of this piece was effectively brought out by good ensemble and careful observance of dynamics by the performers. 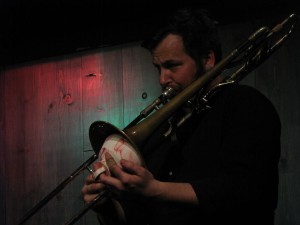 A silhouette of constrained motion, by Tina Tallon followed. This was a solo trombone piece including mutes and extended techniques played by Matt Barbier, who filled the room with all manner of squeaks, growls and guttural sounds. A wide variety of timbres and textures ensued, and as the piece continued one got the sense that a sort of feral language was unfolding, conveying a kind of elemental emotion. There was the sense of hindrance, impediment and perhaps slight vexation, but overall there was a more distinctly organic feel to this – an intriguing exercise in musical and non-verbal communication.

Falling, a work by Jason Barabba was next, based on a text by Annie Jankowski. This featured Justine Aronson’s voice whose range and power were more clearly evident. Richard Valitutto accompanied with a series of trills while long arcs of strong vocal passages soared overhead. The piano was more in an accompanying role, although the piece was punctuated with sharp notes and dramatic crashes that Richard does so well. At one point a sort of dance rhythm broke out and towards the end some recited text – “Grasping at hope that flies right by” – was very effective.

Parking in Cars by Dante de Silva followed and this was built around a mashed recording of a cautionary public service announcement from 1947 titled Are You Popular? Dante de Silva added a bouncy, 50’s sort of tune that incorporated its lyrics from the film: “Ginny thinks that she has the key to popularity – parking in cars with the boys at night.” This phrase was repeated, almost rap-like, while Matt Barbier played along, adding a jaunty bass line. The result produced a feeling that was part nostalgia and part amazement at a message so clearly out of date with 21st century deportment. But all this was more in fun than embarrassment and Parking in Cars proved to be a very enjoyable piece.

Next up was McCallum Songs by Nicholas Deyoe, written for piano and voice and based on a series of love poems written by Clint McCallum. The music consists of several shortish sections that opened with low piano chords and soft vocals, lending a somber tone to this. The text carries the story forward and was sung by Ms. Aronson with a quiet purity of tone. The feelings conveyed by these pieces are variously anxious, wistful, plaintive, frustrating, yearning, angry – all of the emotions that are part of the subject. Some of the text was narrated and this added to the sense of intimacy. Nicholas Deyoe has often exhibited a lively pyrotechnic flare in his compositions, but the McCallum Songs are elegantly infused with a soft, understated passion.

Unphotographable, by Scott Worthington followed and this combined electronic waveform tones with Matt Barbier’s muted trombone. This had a distinctly alien feel as the electronic waves began zero-beating and the trombone joined in, adding to the rhythms. It sounded, at times, like a sort of machine language was being spoken and the trombone playing was precise enough to blend in seamlessly. This piece occasioned an interesting reversal in the sense that the acoustic instrument was combined with the electronic waves as if it were another oscillator. Matt Barbier returned after the intermission for another solo work Mantram: Canto Anomimo by Giancinto Scelsi. This was a more conventional piece – no cold sine waves here. There was an exotic, Asian feel at times and this gave Matt Barbier a chance to stretch out using various slide effects and powerful playing that filled the room.

An arrangement of the Gershwin standard They’re Writing Songs of Love, But Not for Me, by Michael Finnissy was next, performed solo by Richard Valitutto on piano. This began with a tentative feel – as if the music was just below the surface, searching for itself. This had the effect of engaging the listener as the familiar melody slowly came into focus, artfully spanning the decades since the original was first heard. The playing by Valitutto had just the right touch of balance between old and new.

Walk of Shame, written by Richard Valitutto followed, performed by Matt Barbier on a muted bass trombone. A variety of interesting textures were produced with a sort of buzzing from the mute often riding on the pitch. The melody moved along quickly, with rapid passages, adding to a sense of  pace. The playing required consistently good technique and Matt Barbier delivered even as this was his final piece in a long concert.

The concert concluded with Simple Daylight , the noted song cycle by John Harbison, based on a text by Michael Fried. Originally commissioned by Lincoln Center Simple Daylight was first sung by Dawn Upshaw and begins with a sharp piano introduction that settles into a distinctly mysterious feel. The voice enters, building drama, even as the lyrics seem concerned with the ordinary. The music and the text work together effectively throughout, creating tension that results in a kind of indefinite, disconcerting awareness. Now a faster section that adds a further measure of anxiety, and the mood turns variously loud, dramatic, scary, and at times quiet and reflective. This is a complex piece, always something just beneath the surface, but the lyrics and the music always compliment each other perfectly . Harbison’s wide experience with choral church music is evident as he weaves a delicate thematic thread through each of the songs that comprise Simple Daylight. The playing in this performance – and especially the singing of Justine Aronson – never wavered under the many demands of this long work at the end of a full evening of concertizing.

Synchromy will appear at Boston Court in Pasadena July 17, 2015 in a program that will feature Brightwork and a variety of new music.