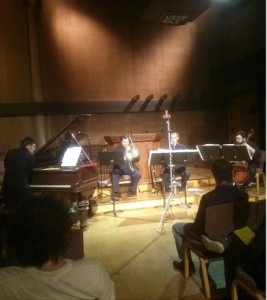 On Friday, March 18, 2016 at the Neighborhood Church in Pasadena, gnarwhallaby presented an evening German contemporary music in a concert titled DEUTSCHwhallaby. Four pieces were heard including a US premiere and the world premiere of Plainsound Lullaby by Wolfgang von Schweinitz.

The first piece was Stau (1999) by Steffen Schleiermacher and this begins with a sharp tutti opening followed by sustained tones and a second sforzando chord ending the phrase. The piano was then heard in its very highest notes with a rapid clicking sound. This sequence repeats several times, producing a feeling of mild vexation in the halting character of the piece as it inches forward. Stau is the favorite German term for traffic jam and anyone who has traveled the autobahn through a large city will have undoubtedly experienced this. As the piece continues some forward movement is heard – a solo from the clarinet and then in the trombone – but these are inevitably followed by a sudden piano crash – and we have come once again to a complete halt. The playing by gnarwhallaby was characteristically precise and powerful, and aptly reinforced the stop-and-go character of this piece. At one point the music moves ahead with an intense, driving beat and a bright, active feel – as if we have finally broken free of the stau – but this comes to an unexpected end, replaced by a sustained tone in the cello and soon we are back to the slower sequences. Stau is the perfect musical metaphor for that most infuriating of modern inconveniences: stop-and-go traffic on a freeway. The robust and accurate playing perfectly complimented the character and intentions of a piece that is fully attuned to the quintessential Los Angeles traffic experience.

D’avance (1996/97) by Claus-Steffen Mahnkopf followed, and this was the US premiere. Starting with a sharp piano chord, this gave way to a series of light, rapid passages in the clarinet that were airily quiet, but soon gaining in volume. The piece then unfolded into an extended clarinet solo, ably negotiated by Brian Walsh, covering all possible combinations of changing dynamics as well as jumps in pitches and tempo. A complex tutti passage followed that was free of any unifying melody or beat, but effectively enhanced the mysterious and ephemeral flavor.  A cello solo followed, as varied and disparate as that heard from the clarinet; and then more tutti passages, at times spiky with complex interweaving or smoother and more sustained.

D’avance proceeds with alternating solos and tutti passages, building in tension and always in a state of revision and transition. This music keeps the listener constantly in the moment, with no expectations raised and none delivered. It is never static but always changing – coherent yet unconnected. It is like walking in a dark forest where the shadows are continuously shifting and mutating into new forms inside your brain. Harmonies, when they occurred, never seemed intentional, but were instead transient and without pattern or repetition. A stark piano solo had a disconnected, jagged feel – full of short, complex phrases that subtly conveyed a sense of alienation. D’avance is a brutally difficult piece of music to perform and gnarwhallaby rose fearlessly to the challenge with a virtuosic display of their collective abilities. Devoid of beat, harmony and formal structure, but full of complex motion and kaleidoscopic textures, D’avance confronts the listener with elemental forces that are masterfully marshaled into a compelling musical perspective.

After a short intermission, Gegen Unendlich (1995) by Mathias Spahlinger was performed and this opened with a high sustained note from the trombone that was answered by the plucking of a piano string. The trombone and clarinet resumed, at almost the same high pitch, and were then joined by the cello. This produced a light, feathery feel to the texture and the sound seemed to hover in the air. More pizzicato on the piano string was followed by quietly high tutti pitches played at the ragged edge of intonation. The playing was very challenging and Gegen Unendlich continued  in this fashion, with high airy sounds from each of the instruments followed by a percussive beat from the piano or cello. This created a palpable sense of disconnected tension until the trombone began playing in a more conventional register, giving the overall color more body and a touch of menace. Loud tutti passages followed, full of activity and motion, including a syncopated rhythm that gave an intense, direct feel to the music. The tempo increased and a rapid stream of notes repeated at the same pitch built up a feeling of expectation – but this was suddenly derailed and the trombone dominated with a wandering rhythm just as the piece concluded. Gegen Unendlich is roughly translated as ‘against infinity’ and is a fittingly challenging sonic exploration of the complex and the abstract. 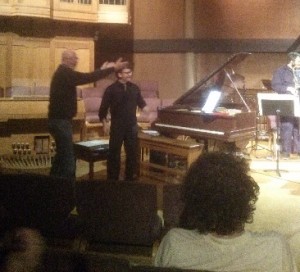 The final piece of the evening was the world premiere of Plainsound Lullaby (2015) by Wolfgang von Schweinitz. This was originally realized as a piano piece, but later expanded to include winds and cello. Plainsound Lullaby begins with low, solemn notes from the piano – the strings inside being manipulated by hand to produce soft, bell-like tones. The clarinet, trombone and cello joined in with similarly quiet notes and this combination took on an almost grand feeling before the tempo eventually slowed to something more like a lullaby. The piece now became warmer and more nostalgically German, nicely evoking a drowsy, peaceful feeling. Microtones were effectively employed, creating a sense of semi-conscious uncertainty where reality and illusion intersect with equal plausibility. Plainsound Lullaby is a masterly creation, full of cutting edge techniques that fashion a most convincing portrait of that most basic of human activities – falling asleep.

DEUTSCHwhallably was a stimulating excursion into the expressive sounds of contemporary German music, expertly composed and solidly performed.

The next concert by gnarwhallaby is scheduled for 8:00 PM on Friday,April 15, 2016 at Clausen Hall, Los Angeles City College in Hollywood.