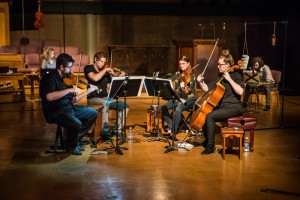 On Saturday, April 2, 2016 the Neighborhood Church in Pasadena was the venue for Rainforest IV, the landmark sound installation by David Tudor. Presented by People Inside Electronics and the Southland Ensemble, Rainforest IV filled the ample sanctuary and attracted a sizable crowd to witness the unique interaction between acoustic instruments, electronics and found objects. The world premiere of Other Forests, by Carolyn Chen was also heard, a work written especially for performance in conjunction with Rainforest IV.

The Rainforest IV (1976) installation consists of several stations, each with a series of found objects suspended from a framework made from small pipes, much like a tall coat rack. The objects varied in size, shape and materials – there was a piece of sheet metal about two foot square, metal bowls, plastic objects, a tambourine and a number of unstrung string instruments. Each object was fitted with a transducer that imparted vibrations from various recorded pitches and other sounds. Additionally, there was a pickup attached to each object and this transmitted the individual sonic response downstream to amplifiers and speakers – the idea being that each object was voicing an interpretation of the applied input as a function of its mechanical properties. The input signals to each found item could be rerouted – or several summed electronically – as needed during the performance. All of this was accomplished with a bewildering array of cables, connectors, analog amplifiers and speakers as based on David Tudor’s early circuits, specifications and schematic diagrams. Computers could also be seen as part of the installation – a more contemporary way to record and direct the signals. 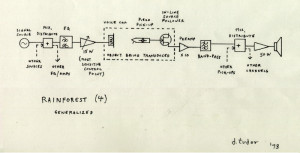 In a 1988 interview, David Tudor explained the intent of Rainforest IV: “The idea is that if you send sound through materials, the resonant nodes of the materials are released and those can be picked up by contact microphones or phono cartridges and those have a different kind of sound than the object does when you listen to it very close where it’s hanging. It becomes like a reflection and it makes, I thought, quite a harmonious and beautiful atmosphere, because wherever you move in the room, you have reminiscences of something you have heard at some other point in the space.” 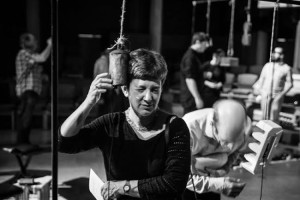 As the concert opened, the audience was encouraged to move about the installation stations and listen to the inputs and responses coming from each object. These varied depending on size and material, with the larger metallic pieces often more responsive than plastic objects. The unstrung violin seemed to contain tiny bell-like sounds and a similarly mounted cello was heard to be full of small, high-pitched squeaks. Overall the impression was of some small workshop full of buzzing, whirring and other light mechanical sounds. After some time of wandering and exploring, the audience took their seats as the musicians took up positions in and around each station.

For this performance the Southland Ensemble consisted of string instruments plus a soprano saxophone and their sustained tones added a warm feel to the buzzing and clicking of the Rainforest IV installation. Some short musical passages followed and a lovely violin melody emerged. As the players moved about the installation there was the sense that the mechanical sounds were becoming integrated to the ensemble. Ultimately, the impression took hold of being in an actual rain forest – the buzzing of insects, the occasional bird call and some viola pizzicato that could have been thick rain drops falling from branches and leaves. It was as if the presence of the acoustic music invited your brain to hear the other sounds from the installation metaphorically, and this evoked the convincing mental image of an actual rain forest. Even when the players withdrew the impression persisted of an organic, natural-sounding environment. As this part of the concert concluded a loud hissing from the electronics predominated, suggesting a strong tropical downpour.

At this point the Southland Ensemble string quartet silently took their seats at four music stands placed in the center of the sound installation. After some minutes of hearing the electronic rainfall, Other Forests (2016) by Carolyn Chen commenced with a short tutti phrase followed by more rain forest sounds. The string quartet followed with sustained mournful tones, broken by a low growling in the cello. More soft musical tones followed with a hint of mystery in the violins that occasionally worked up to a mild anxiety. At least three of the instruments were equipped with pickups that could be moved by hand to various points on the surface or strings and after some warm tutti chords the sound installation was heard to echo this in a faint, almost ghostly fashion reminiscent of an old wax cylinder recording.

As the piece progressed the playing was mostly sustained, solemn and quietly atmospheric and this provided a good contrast to the sharper and higher pitches normally emanating from the found objects. A faint, disembodied voice would occasionally be heard, along with snatches of some distant melody. At times the string quartet went tacet, allowing the sound installation to echo the most recent musical phrases and combining them with more rain forest sounds so that the two seemed to merge into a common ensemble. Eventually the house lights faded out, concluding the piece. Other Forests is an amazing piece of composing craftsmanship – the string quartet having to work within a complex scheme of sounds recycled from found objects – but the result was a convincing portrayal of an organic entity as fashioned from acoustic, electronic and mechanical means.

This performance will be repeated in its entirety at 7:00 PM Friday, April 15th, 2016 at the Conrad Prebys Music Center Experimental Theater, UC San Diego, as part of their Springfest Experimental Music concert series.