Dog Star 12 at The Wild Beast 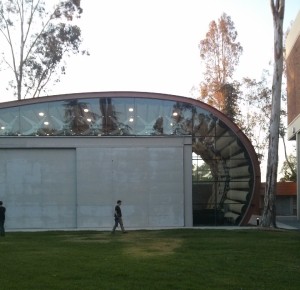 The 12th annual Dog Star series of concerts are in full swing all around Los Angeles and the venue for Sunday, June 5, 2016 was The Wild Beast, located on the Cal Arts campus. An evening of experimental music was presented in a concert titled The Theater of an Open Space and some 30 performers were on hand to realize reference works by John Cage, Manfred Werder and Pauline Oliveros.  Additionally, two new pieces were presented by Casey Anderson and Todd Lerew.

The first half of the concert consisted of four complimentary works given serially and without pause. Four segments of Variations IV, by John Cage formed a framework while From Unknown Silences by Pauline Oliveros, 20121 by Manfred Werder and 0’00”, also by Cage, were woven neatly into the continuous 32 minute performance. The first segment of Variations IV began with the players of the ‘orchestra’ arranged around the interior of The Beast according to a drawing a the center showing lines of direction and spatial locations. The players followed a timed score and at various intervals certain familiar pitched or non-pitched sounds were heard – the rap of a hammer, a ringing alarm clock, a coffee mug vigorously stirred or the knocking of rocks together – and suchlike. These sounds were separated by a few seconds of silence. Sometimes the player would move towards the center while performing – then return – and sometimes the sounds from two or more players overlapped.

At first the familiarity of these sounds evoked their normal mundane context in the mind of the listener. As the sequences were repeated, however, and especially the ones that involved movement of the players toward the center, the proceedings acquired a more ceremonial character. The movement of the players became choreography and the actions took on an imagined symbolic character. All of the segments of Variations IV had a similar pattern, but with some minor modifications involving the number of sounds heard concurrently or the number of players in motion. From Unknown Silences, the Oliveros piece, fit perfectly within this framework with a similar sequence of independent sounds, preceded and followed by periods of silence. The feeling here was perhaps more introspective and acute. Cage asks us to consider familiar sounds in the context of performance; Pauline Oliveros invites us to listen deeply to solitary sounds, processing them in the silence that follows. The two works intertwined seamlessly.

At about the midpoint the players rose and gathered together in the center, exchanging scores they had written during the first half, and this action marked both the Manfred Werder contribution and the 0’00” portion of the program. The last two sections of Variations IV followed these new instructions, with the materials and form similar to the opening. All of this was a bit reminiscent of Water Walk – another Cage composition – that asked us to evaluate ordinary sounds in a musical context. Variations IV aims for same sensibility, but from the perspective of the familiar as ritual. This was ably expressed by the 30 performing players of the orchestra. 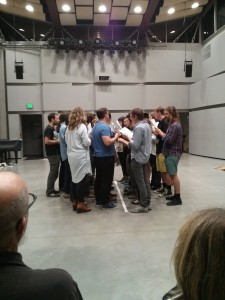 Following an intermission, SCRUM, a new work by Casey Anderson, was presented. This began with all 30 players arranged in a single group in the center of the space. There was clapping, talking and the sound of portable radios as the individuals began to move out into the space and remix. In a short time they had formed two groups facing off against each other across a line marked on the floor. The clapping in one group became synchronized while those opposite held up their portable radios. This confrontational equilibrium was held for short time, and the two groups dispersed again out into the room, vocalizing and humming.

This process of aggregation, confrontation and dispersal continued as the piece went along, and, as detailed in Anderson’s written score, the actions of the performers were more intentional and structured than it first appeared. Each performer selected an activity at the beginning and searched among the others for someone doing the same thing – this might be clapping, singing or some similar activity. As the score states, the goal is “…to build an incrementally expanding ensemble: solos become duos, duos become trios, etc. “ When two groups reach 8 members, the remaining performers join one or the other and form the opposing lineup at the center of the space. When a balance is achieved, one of the performers breaks through the assembly tagging the other performers, who then cease their activity. The groups disband, spreading apart, and the cycle repeats.

The activity, sound and movement in SCRUM was in marked contrast to the quieter pieces from the first half of the concert, and the dynamic ebb and flow of 30 players through the space energized the audience. The moments of confrontation between the assembled groups added to the drama and became a metaphor for the political posturings in this election year. SCRUM is a lively and insightful work, allowing the audience observe the dynamics of human confrontation in the artful abstract. 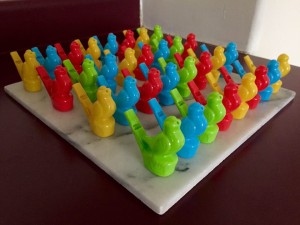 The final work of the evening was Small Objects in the Weather, by Todd Lerew. The configuration for this piece had six performers standing along one wall equipped with a large piece of aluminum sheet metal and when these were shaken there was a credible simulation of thunder. The other players of the orchestra sat cross-legged on the floor in a semicircle, awaiting events. A ‘conductor’, facing the others from the front, reached for a very large noisemaker – as you might have for New Year’s Eve – and this was let loose with a loud explosion and a shower of confetti. Ringing from the orchestra was heard as the players struck metal rods on the concrete floor. A large sheet of thin copper foil was passed around and torn into pieces of various sizes. These sheets were vigorously shaken by the players and this produced a convincing likeness of the sound of a driving rain. More loud explosions followed, along with the sharper pop that came from a smaller variety of New Year’s noise makers. The floor and the players were soon covered in a layer of confetti and streamers.

At one point everyone began blowing into bird whistles – the kind for children filled partly with water – and the combined sound was an impressively vivid facsimile of strong wind in a storm. More large confetti explosions followed and the orchestra was heard humming in unison. The pitched changed downward as each additional blast was set off and ultimately the volume dissipated until a only soft tones were heard. The conductor grasped two mallets and began a quiet roll on a large gong, just barely audible at first, and the proceedings took on the aspect of a solemn ceremony. At this point, another player began to fire off a series of small noisemaker pops across the orchestra. It seemed, at first, like some sort of blessing, but took an ominous turn as the player nearest the stream of confetti would stop singing, almost as if shot. A crescendo in the gong roll added to the brooding atmosphere and the piece ended quietly thereafter. 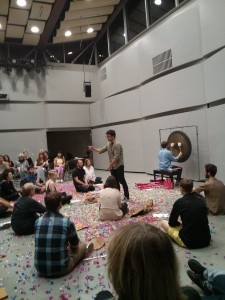 Small Objects in the Weather is a persuasive and energetic meteorological metaphor, artfully created from ordinary materials, but a performance that ultimately delivers unflinching commentary at its conclusion.

The Dog Star 12 series of concerts continues through June 18 at various venues around town.

The players in the orchestra for this concert were: