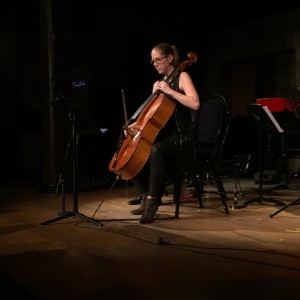 On Friday, May 27, 2016 WasteLAnd presented a concert titled subterranean tracings at Art Share LA in downtown Los Angeles. Five works were presented including new pieces by Michelle Lou and Nicholas Deyoe. An overflow crowd turned out on the start of a holiday weekend and packed the roomy Art Share performance space.

The first piece on the program was for Chris Marker by Brian Griffeath-Loeb and the impressive forces deployed on the stage consisted of bass clarinets, euphonium, tuba, cello and double bass. For all of their potential power, however, the sounds coming from the instruments were small and subtle – a soft tapping on the cello, a light flapping of the valves on the euphonium, the occasional pizzicato note. A low trill in the bass clarinet added some movement and the accumulated clicking and clattering began to form a sort of rhythmic percolation. A low, guttural sound in the euphonium was heard, followed by a single tutti chord and extended silence. The knocking sounds reappeared, accompanied by the sound of rushing air moving through one of the horns. The piece proceeded in this way – a soft clatter of various sounds, a loud tutti chord and then silence. Even in the absence of musical tones, the sparse percussive texture provided an engaging continuity. The overall effect was a something like hearing a car cooling down in the driveway after a long hot drive on the freeway. for Chris Marker is a quiet piece, inviting the listener into contemplation and reflection while immersed in a new sonic landscape.

Next was A way [tracing], by Jason Eckardt, for solo cello. Ashley Walters was the featured soloist and this began with a strong flurry of notes at a brisk tempo. More rapid passages followed producing an active, bouncy feel while other sections seemed almost angry with a variety of heated phrases and aggressive sounds. A way [tracing] is a complex and challenging work – for both listener and soloist. The swirling texture and often agitated phrasing was accurately and confidently played, a showcase for the virtuosity that Ms. Walters dependably brings to all her performances. Enthusiastic and sustained applause followed.

Michelle Lou, the WasteLAnd featured composer for this season, presented an untitled work that called for an imposing ensemble with no less than trombone, trumpet, horn, tuba, contrabass clarinet, bassoon and contrabassoon, english horn, flute, cello and double bass. With Nicholas Deyoe conducting, this began with a low, fluttering in the bassoons – a sound felt as much as heard. Countering this were creaking and groaning sounds from the cello and bass, adding a measure of tension, followed by a large tutti chord from the woodwinds that added to the ominous atmosphere. A watery sound from the trombone gave the piece a nautical flavor, like being on an old wooden sailing ship creaking along on a foggy, moonless night. More powerful chords came from the winds at regular intervals, each increasing in volume, as if approaching some unseen danger. Rapid calls by the trumpet and trombone added urgency to the sense of warning while the clicking sound of ratchets markedly increased the tension. 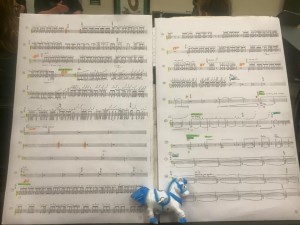 This pattern continued: soft creaking, groaning and the strong intervening chords from the winds. As Michelle Lou wrote in the program notes, the piece “…attempts to take its time, sitting in its sounds and textures, repeating, moving but going nowhere.” All of this eventually climaxed in a series of forceful horn crescendos, and it was at this point that the players released about a dozen toy windup horses – the source of the previous ratcheting sounds – and they galloped madly off in several directions. More new sounds were heard and at one point wire barbecue skewers were inserted between the strings of the cello and double bass, producing a twanging clatter as they were struck and released. Finally a high tutti flourish in the horns signaled the conclusion of the work. Whatever the composer chooses to title this work – and surely ‘mechanical horses’ should figure into it – Michelle Lou has created an evocative sonic journey that commands the imagination and delivers the unexpected.

After the intermission Á bout de bras by Georges Aperghis was performed by soloists Claire Chenette on oboe and Brian Walsh, clarinet. This began with two very loud and piercing notes – very near each other in pitch – and this immediately seized the attention of the audience. A series of fast intertwining passages ensued, played simultaneously but without a common beat, and it was as if we were hearing a chattering conversation between two large birds. This continued as the piece progressed, the players standing directly opposite one another to facilitate communication. The sounds from each instrument streamed out continuously and the lengthy score stretched across three music stands. The interaction and precision by Walsh and Chenette was impressive, resulting in a seamless duo. The piece ended on a long crescendo and loud high note, as if punctuating the the preceding play. Á bout de bras is active and mercurial music that demands extraordinary technique, and in this performance the soloists delivered in dazzling fashion.

The final piece on the program was Lullaby 6 “for Duane”, by Nicholas Deyoe, another in a series works by the same name and dedicated to the memory of the composer’s late father. Deyoe also conducted, and a formidable ensemble gathered including trumpet, horn, trombone, euphonium, tuba, flute, oboe, bass clarinet, bassoon and double bass. Ashley Walters was the featured soloist for this work, a cello concerto. Nicholas Deyoe explained his approach in the program notes: “Rather than developing a concerto based on opposition, the ensemble material in Lullaby 6 exists as a result of what Ashley has played. She leaves a residue behind that begins to follow and attempt to develop and keep up, eventually warping itself into something unruly and chaotic. Both the chaos and the order exist because they have been created and guided by the soloist.”

Lullaby 6 opened with a sustained tone in the cello, closely followed by a loud punch from the low brass. Soft, low sounds in the brass framed a flurry of rapid notes from the soloist. A strong tutti chord and crescendo led to a solitary high note in the horn that established a mysterious, atmospheric feel. An extended cello solo followed, surging with complexity and increasing in volume until settling back into more sustained and softer tones. This pattern continued throughout, great breaking waves of sound with dramatic dynamics followed by lower and slower sustained tones. The brass and woodwinds provided powerful tutti chords between the cello passages. The ensemble playing was everywhere confident and precise despite the varied textures and colors called for in the score. Towards the finish there was an extended cello solo that was framed by some soft woodwinds and this concluded the piece with a wistful, plaintive feel. Lullaby 6 is a masterly work of complex composition and, in this performance, well-matched to the imposing talents of the soloist. 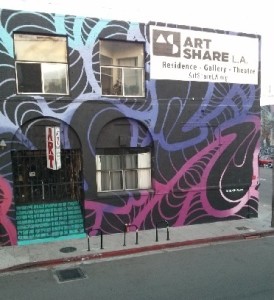 At the conclusion of the concert WasteLAnd Executive Director Scott Worthington announced that starting in September the group will perform on the first Friday of each month at Art Share LA. The featured composer for next season will be Erik Ulman and WasteLAnd will also make an appearance at Disney Hall.