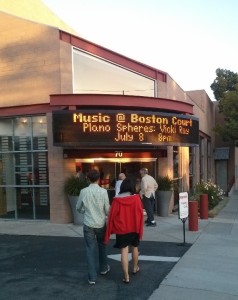 Friday, July 8, 2016 at Boston Court in Pasadena found Vicki Ray featured in a concert presented by Piano Spheres, the long time champion of new music in Los Angeles.. Fifty Shades of Pianissimo was the fitting title for the concert which consisted of a single piano work, For Bunita Marcus (1984), by Morton Feldman. A sizable audience gathered to hear this extraordinary piece, filling the larger Main Stage performance space at Boston Court. A video by Clay Chaplin accompanied the 75 minute work that was played continuously, without intermission.

As Ms. Ray took her seat at the piano the entire theater was darkened, and a prolonged period of meditative silence established the mood before the first notes were heard. A series of soft single notes then sounded, and a slow, meandering melody arose that carried an air of quiet mystery. This continued with the occasional appearance of a two-note interval or – more rarely – a single chord. After a few minutes of quiet playing the video appeared on a large screen behind the stage, consisting of an edgewise view of the keyboard. As the piece progressed, faint ghost-like shadows of moving hands could be made out. This morphed into a series of successively more abstract views of the piano, with the images multiplied across the screen. All of this complimented the music perfectly.

The later music of Morton Feldman is famously quiet, subtle and always in the moment. The composition of this piece hinges on the metering, as described by Feldman in the program notes: “For Bunita Marcus mainly consists of 3/8, 5/16 and 2/2 bars. Sometimes the 2/2 had musical importance, like at the end of the piece. Sometimes the 2/2 acts as quiet, either on the right or the left or in the middle of a 3/8 or a 5/16 bar, and I use the metre as a construction – not the rhythm – the metre and the time, the duration which something needs.” In addition to the quiet, contemplative feeling – which in itself commands concentration – the phrasing of For Bunita Marcus unfolds by what seem to be two independent but parallel lines of single notes, whose interactions of pitch and time invite the listener to evaluate the sounds of that brief instant. These interactions recur every few seconds, keeping the ear focused and the hearing constantly engaged. The audience responded accordingly, with undivided attention and complete silence for the duration of the work.

New music concerts are normally held in the Branson room at Boston Court, a smaller space with generally reliable acoustics. The larger Main Stage is used primarily for theater productions and the performance of a subdued work such as For Bunita Marcus doubtless caused concern for the Piano Spheres brain trust. The piano was situated in the center of the stage, with the lid completely removed. There was a microphone just above and over the center of the piano interior, but it was unclear if this was for amplification or recording purposes. In any event, everything worked out satisfactorily. Each note was clearly heard and rang out cleanly into the silence of the audience, without loss of detail or nuance. The lighting and projection of the video were flawless and while there was some acoustic competition at times from the low hum of a ventilation motor, it was not a distraction. The Wild Beast at Cal Arts might have provided superior acoustics for a Feldman piece such as this, but the Main Stage at Boston Court met the challenge reasonably well.

By the midpoint of the performance the video shifted to a series vivid views of the night sky, often including thousands slow-motion trails of starlight. The effect was an amazing combination of the natural and the mystical. At times the star fields blended together in a sort of moving fog. At other times meteor trails could be seen arcing through the sky – it was very much like listening to the concert while sitting outside on a summer evening. The music also seemed to evolve at this point from spare sequences of single notes to a more fluid sound with a slightly faster tempo . The notes fell within the same upper and middle registers as previously and the dynamic remained a restrained pianissimo – Ms. Ray seemed to caress the keys as the quiet notes drifted upward and outward into the audience. 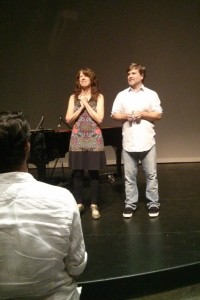 The stamina and concentration of the soloist was extraordinary throughout and For Bunita Marcus closed as it began, with the stage and house lights dimmed to complete darkness. A long silence of reflection followed, and the audience responded with enthusiastic applause, many standing in ovation. This performance of For Bunita Marcus was a remarkable realization in sight and sound of the classic late 20th century music of Morton Feldman. Piano Spheres continues to bring to Los Angeles the gift of contemporary piano music carefully curated and brilliantly played.