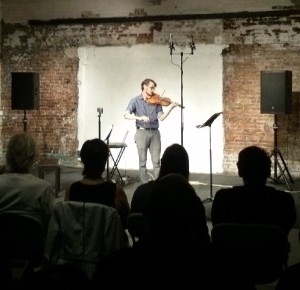 On Tuesday, June 28, 2016 at Monk Space in the Koreatown district of Los Angeles, the Microfest series concluded with Beyond 12, a concert devoted to the music of alternate tuning, present and past. A full house turned out to hear Aron Kallay and Andrew McIntosh perform seven varied works from six different composers.

The first piece was Fugitive Objects (2007) by Kyle Gann, and this was performed by Aron Kallay at a keyboard that was programmed for pitch sets outside the conventional 12 tone equal temperament. Fugitive Objects opened calmly, with a series of solitary ascending notes, conventionally pitched. This was repeated and by the third time through, new and less familiar notes were heard combined with a deep pedal tone that supplied a simple but effective harmony. All of this had a somber, reflective feel, well within the sensibilities of a listener unacquainted with alternate tuning. As the piece progressed the incidence of unconventional pitches seemed to increase, but the melodic line remained clear and direct while Kallay’s sensitive touch added to the quiet, introspective demeanor. Fugitive Objects proved, through its pragmatic approach, to be the ideal piece to begin this concert.

Intonation after Morton Feldman 1 followed, the first movement of Les Duresses (2004) by Marc Sabat and performed by violinist Andrew McIntosh. This piece is the result of an extensive study by Sabat to create an etude for string players that would allow them to master the famously subtle intonation so characteristic of Feldman’s later music. This began with slow, sustained tones with an altogether quiet and solitary feel. As the piece progressed some lovely harmonies emerged, and as the unconventional pitches made their appearance the intervals heard took on a very expressive coloring. This was played with great confidence by Andrew McIntosh who had to contend with both the quiet intonation and the unfamiliar tones. Towards the end a bit of tension crept in, especially in the higher registers, but overall, this movement of Les Duresses is an excellent study of the supremely understated Feldman style. 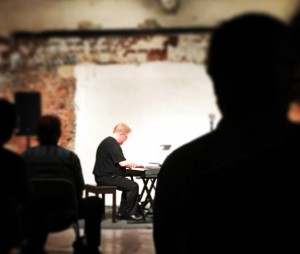 The Weasel of Melancholy (2014) by Eric Moe was next and this started off with a moving melody line, but with chords in the lower registers that added a somber quality. This had the dramatic flair of a piano concerto – without an orchestra, of course – but with all the familiar dynamic contrasts, trills and flourishes. The alternate tuning here often led to runs of notes that produced an untethered feeling, adding to the pensive atmosphere of this piece. The quantity of notes and the often complicated rhythms were a departure from the opening works in the program, but all were ably negotiated by Kallay. The underlying design and a strong emotional arc give The Weasel of Melancholy a helpful structure that guides the listener through the more expressively complex terrain created by pitch and texture.

Following the intermission, Andrew McIntosh returned to play Partita No. 5  (1715) by Johann Joseph Vilsmayr. This was performed on a Baroque violin and according to research done by McIntosh, Partita No. 5 is among the earliest known solo partitas for violin using an unconventional tuning. This piece was included in the program to illustrate historical tuning practice and in this case the scordatura was achieved by tuning the E string to D. The work consisted of eight short movements and the first of these, Prelude, opened with a fast, skittering line that was almost mirage-like with its rapidly changing textures and colors. The playing by McIntosh was disciplined and precise, bringing out all of the details of the complex surfaces – in this opening movement and throughout the entire piece. Partita No. 5 was an attempt by Vilsmayr to popularize contemporary French forms in his native Austria and so this work includes dance movements such as Gavotte, Menuett, Boure and the like. Some had straight-ahead rhythms while others were more stately and deliberate. The rhythmic gestures seemed always to be in the forefront and the harmonies secondary, as probably makes sense for a piece composed for a single treble instrument and intended for the hands of a proficient soloist. The scordatura seemed to provide a warm, unifying element to the different movements and the elegant Baroque ornamentation – a French influence – gave many of the phrases a notable flair. Partita No. 5 was perhaps the most conventional piece on the program and the familiar feel combined with the accomplished playing was received with sustained applause.

Next was A History of Elevators in Film (2014), by Holland Hopson. This is a keyboard piece in four movements and in addition to using microtones, A History of Elevators in Film is realized from a graphical score. The movements can be performed in any order and, as explained by Aron Kallay, there is software that detects what is being played on the keyboard at any given time and an algorithm adjusts the tuning accordingly. All of this begins with series of single notes, then some lovely harmonies built from repeating phrases that have a somber feel combined with a tinge of regret. A sudden crash on the keyboard rings out – full of drama – instantly changing the mood. This is repeated but with slight changes in the notes on each hearing. The mood shifts again as a gentle melody is heard, like raindrops falling on flower petals. This melody line also repeats, with new notes heard on each playing. A series of tones sound from the lower registers in the last movement and here the tuning is dynamically altered to give a sort of rubbery pitch that varies with time. For all its software and sophistication A History of Elevators in Film is an engaging an highly musical work that presents a remarkable variety of moods and colors.

This was followed by Two Commas, Movement III of Les Duresses (2004), more solo violin music by Marc Sabat. Andrew McIntosh again performed and noted that Sabat’s work is characterized by a high degree of precision and attention to detail. The piece began with three groups of repeating tones with a consistent rhythm and strong beat. Each of the repeated phrases contained slight variations that effectively added to the nuance and coloring. The persistence of the rhythmic pattern acted as a framework, allowing the piece to neatly unfold. Two Commas is a subtle work whose artistry is discovered by the listener through superior technique, as evidenced by the soloist in this performance.

The final work on the concert program was The Blur of Time and Memory (2014) by Los Angeles-based Alex Miller and this was a keyboard piece based on a tuning devised by the composer. This began with a strong opening line, with many dark sounds and pitches. Although the tuning was definitely exotic to the ear, the harmonies that developed from this material were simultaneously dramatic and intriguing. The dynamic changes added to the imposing sound and as the piece reached a crescendo, the combination of unorthodox pitches and the muscular playing of Aron Kallay sailed past a feeling of tension and into anxiety. The Blur of Time and Memory illustrates the evocative power and emotional punch that can result when a composer goes all in with alternate tuning.