Last Dance at the wulf 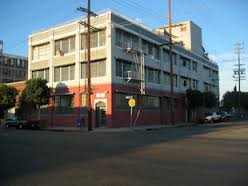 The Last Dance series of events at the wulf continued on Wednesday, August 17, 2016 with experimental music offerings by Carmina Escobar, Casey Anderson and Scott Cazan. The wulf will be moving to new quarters in the fall, closing out a successful eight-year run at the Santa Fe Avenue address in downtown Los Angeles.  A good-sized crowd of enthusiasts gathered for an evening of friendly chatter and three pieces of new music.

Carmina Escobar opened, equipped with a microphone, colored lamps and a camera connected to a computer. According to her website: “Her work focuses primarily on sound, the voice, the body and their interrelations to physical, social and memory spaces.”. Rough ambient sounds began the piece, perhaps the roar of a passing jet. Humming was heard, soon joined by more sounds that were variously alien and industrial in character. Images from the PC camera were projected on a screen – indistinct and flesh colored – while the lamp issued a cool green light that flooded the darkened space of the wulf. Singing tones appeared in the audio and these evolved into indistinct words and the occasional shriek.

As the piece proceeded the lamp turned to a blue color and the images on the screen became a bit clearer – parts of a face that proved to be Ms. Escobar, who was holding the PC camera a few inches away from her head. As her voice increased in pitch and volume, these purer tones provided a nice counterpoint to the ambient and alien sounds in the background. An unintelligible speaking voice was heard in the audio that, combined with the fuzzy and partial images on the screen, created a sense of disoriented uncertainty. It was as if your mind and your senses were struggling to arrange this into some kind of context. The images, different colored lamps and new audio continuously arrived in various combinations, challenging the comprehension of the observer in multiple ways. The singing voice of Ms. Escobar stood out as the brightest and most lucid sound, offering a welcome connection to the familiar. As the piece neared its conclusion the indistinct sounds dropped away, leaving a loud electronic tone that abruptly ceased. Carmina Escobar succeeds in creating a world of sounds and images that float just beyond our comprehension and grasp, and then gives us the critical vocal landmark to find our way. 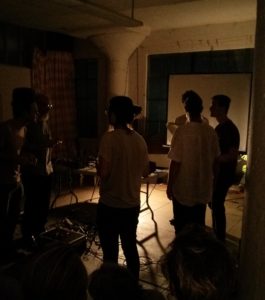 Next up was The Argument, a piece by Casey Anderson, who appeared with five other performers in a rough circle, all holding portable transistor radios. Anderson began by reading aloud from a poem – “A Wave” by John Ashberry. The performer to his immediate right listened closely, picking out phrases or fragments and repeating them, even as Anderson continued reading. The next performer in the circle listened to the person on his left and did likewise, so that a sort of ringing of words and phrases took place as the piece progressed. When nothing was being repeated in the circle, the performers played their portable radios. The success and texture of this piece depended on the careful listening and sharp memory of the individuals. An interesting variety of words surged around the circle, sometimes an entire sentence and sometimes just a word or two. Often a phrase would shorten as it worked its way around, diminished by the hearing and memory of those repeating it.

The concentration of the performers and the repetition of the words gave a sense of activity and common purpose to this. The patterns and cadences of the voices suggested an earnest conversation or perhaps an ancient incantation. The sound of the portable radios – tuned to various local stations – added an emotional space to the otherwise intimate feel of the conversation and projected a sense of wider importance onto the proceedings. The Argument is an interesting study of how the sounds of the spoken word can transmit feelings and emotion, even when divorced from context or content.

The final piece for the evening was Network Dilation by Scott Cazan and this was realized with a violin, a computer and two large speakers placed about 20 feet apart. The piece began with a series of electronic beeps and chirps that was soon joined with a sort of clatter that gave a strong sensation of movement and energy. It was a bit like being inside an old school pinball machine. Although this was loud, it did not overwhelm and the addition of a booming bass tone lessened the sense of randomness by producing a regular beat. The violin was fitted with a pickup and the energetic bowing by Cazan produced a continuous series of complex squeals and squeaks that resembled the sounds of a working metal lathe. These higher pitches formed a nice melodic counterpoint to the bass and the overall feel was brightly optimistic.

As regular increases in pitch and volume continued, there was a sense of mounting excitement along with the feeling that the whole process was going slightly out of control. Yet even as the sounds intensified, the various elements held together in a kind of primal harmony. After peaking with a very powerful sound, the piece decelerated and gracefully slowed to a stop. Network Dilation is crafted from sounds that are partly alien, partly electronic and partly identifiable – but the sum of these – remarkably – is completely musical.

The Last Dance series continues through the end of this month. New concerts are being programmed for the fall and the wulf will continue to provide events and music in various venues around town. A permanent home for the wulf is planned, and new locations are being investigated. For eight years the wulf on Santa Fe Avenue has been an integral part of the new music scene in Los Angeles. Thanks to Mike Winter and Cal Arts for their support and stewardship of this important venue. September will begin a new chapter, continuing a fine tradition.