Zoë Keating at the Shannon Center 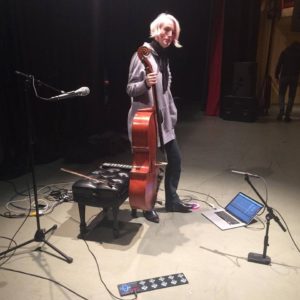 On Saturday, February 11, 2017 Zoë Keating made a Southern California appearance as part of the ongoing Real New Music concert series at Whittier College. A large crowd filed into the Ruth B. Shannon Center for the Performing Arts for an evening of improvisation combined with electronic looping and exceptional cello playing. The performance followed an hour-long demonstration session by Ms. Keating, held earlier that afternoon in the concert hall.

Tetris Head was the first piece on the program, and this illustrated something of the methods and form of Ms. Keating’s music. The cello was fitted with a small microphone and her chair was surrounded by a large mat with foot switches, a computer and another electronic box or two. There were a few neatly run cables to be seen, but not the excessive clutter common to so many systems. The first notes from the cello were short and spikey and these were recorded by the looping software and re-played into a speaker system. This formed a regular, rhythmic track and Ms. Keating then began adding a series of longer, smoother tones from the middle register of the cello that made for an agreeable contrast. As this second layer was looped, some double-stopped harmonies appeared adding a sense of depth. As new, faster melodies were built up, there was an overall feeling of purposeful movement as the piece proceeded. The looped segments would often reappear in a new combinations, subtly shifting the perspective and mood. Tetris Head concluded as the layers were gradually disabled by the foot switches, tapering down the texture and density of the sound before quietly trailing off.

Successive pieces increased in complexity, and this required new levels of precision to accurately interleave the layers. By the second and third pieces in the concert, intriguing counter melodies were heard against the looped sections. The variety of colors and emotions that were conjured from the looping process was also impressive. In Seven League Boots, a piece about her home near the coast in Sonoma County, Ms. Keating was able to evoke that appealing combination of rural redwood serenity and easygoing mellowness that we associate with the best Northern California sensibility. In Frozen Angels, the tone was decidedly darker, with dissonance and tension infused within the layers. Another piece, composed while Ms. Keating was staying in Quito, Ecuador, has all the images of the scene from her hotel window – clouds boiling up against the towering Andes and the vibrant movement of people in the market square below. The textures, tones and counterpoint created from the looped segments afford a rich musical palette with Ms. Keating always in complete control of their deployment.

Later in the concert even more intricate constructions were heard involving fast runs of pizzicato notes and rapid arco passages. The layers piled up, with a skill level that seemed to increase exponentially. There was no score evident for any of these pieces and Ms. Keating seemed to have the basic musical ideas for each segment committed to memory. She then worked out how they fit together by playing them and it was like watching someone improvise a fugue – always thinking a few steps ahead and in three dimensions. The combination of improvisation, rhythm, melodies and counterpoint is fascinating to hear and the appreciative audience responded with sustained applause at the end of each piece.

The final piece of the concert, by way of an encore, was an experimental work-in-progress that pointed to the future. A series of extremely high, thin pitches, followed by stronger tones in the middle registers, gave a remote, lonely feel to this. A rapidly syncopated pizzicato layer added complexity to the sense of isolation, while a low rumbling in the bass registers threw an ominous shadow across the texture. This final piece seemed to be drawing from the same well of inspiration as other contemporary composers lately, perhaps reflecting the tension and uncertainty of our present social circumstances. A prolonged and enthusiastic standing ovation followed.

Apart from the masterful playing and artful leveraging of looping to multiply the expressive power of her instrument, Zoë Keating is also in the forefront of 21st century promotion and career management. A long line of her followers formed up after the concert, filling the lobby, and Ms. Keating generously stood chatting with them for a long time. There was a table piled high with CDs – and she was giving these away to those who subscribed to her mailing list. Ms. Keating seems to have a keen sense of what works in today’s volatile performance marketplace; she understands her audience and they respond with genuine affection.