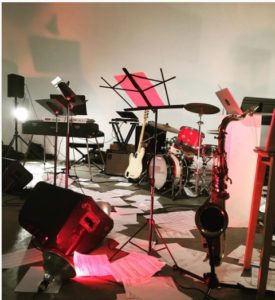 Saturday, April 29, 2017 and Human Resources in the Chinatown district of Los Angeles was the location for the Experimental Music Yearbook concert that featured a new work by Carolyn Chen and a set by the visiting Happy Valley Band. The wide open spaces of Human Resources were just right for the expansive choreography of Ms. Chen’s Signs of Struggle, and a perfect venue for the booming exuberance of David Kant’s amplified Happy Valley Band ensemble.

First up was Signs of Struggle by Carolyn Chen and this began with four players filing silently into the performance space – unoccupied save for a large drum on the floor surrounded by various found objects. Two of the performers were blindfolded, and led out into the open space, turned around several times until disoriented, and then left to wander blindly about. The other pair seated themselves at the drum on the floor.

The wandering pair, no doubt using aural cues, eventually met and began to struggle, as if wrestling. The pair sitting at the drum had a clicker, and when this sounded all movement stopped, resuming again after a second click. The wrestling pair worked their way to the drum, engaging one of the two seated there. The three now wrestled their way back into the open space, each pulling in different directions and constantly engaged, while sliding and crawling along the floor. Eventually all four were drawn into one rolling scrum, each struggling to keep the others from moving in any given direction. The blindfolds had been removed by this point and all were in continuous physical motion with the heavy breathing of the players clearly audible. This contest of strength became almost comical at times, provoking a few scattered laughs among the audience.

At length, all four arrived back at the drum. Here they separated and began heaping found objects on the drum head. With each grabbing the rim of the drum, they began to pull and push, contending for the direction that the drum should take along the floor. The sound that the drum made as a result of these efforts became a remarkably strong metaphor for the physical struggle witnessed just prior to this point in the performance. The objects on the drum head created a swirling roar, punctuated by sharp raps as some of the pieces were thrown upward and fell back. The final contest over the direction of the drum continued for a minute or two before all fell silent at the finish.

We have all heard percussion parts that put us in mind of cannons or hoof beats – but this was much more powerful and vivid even though it was not particularly loud or dramatic. It was as if the physical drama in the first part of the performance prepared our brain to acutely receive the symbolic sounds of the struggle as portrayed by the prepared drum. The choreography of this piece is extensive – Carolyn Chen’s score, performance notes and sketches run to several pages. The physical exertions of the players – Liam Mooney, Erika Bell, Davy Sumner, and John Eagle – were met with extended applause. Signs of Struggle is an enlightening combination of physicality and musical symbolism that surprises the listener with its power of suggestion and stimulation.

After a short intermission, the chairs were rearranged to face the Happy Valley Band, who had arrived from the Bay Area with an impressive array of cables, amplifiers, speakers sound boards, monitors and computers. Along with leader David Kant on saxophone, there was Andrew Smith at the keyboard, Beau Sievers on drum kit, Alexander Dupuis on guitar and Mustafa Walker, bass guitar. In addition, three local players sat in on various pieces during the set: Eric K.M. Clark, violin, Casey Anderson, saxophone and Sam Friedman, harmonica.

The music of the Happy Valley Band is based on transcriptions of popular songs which are highly processed using sophisticated signal analysis software that separates out the component parts. This is a multi-step process that, according to Kant’s website “…determines notes by changes in pitch and amplitude. With adjustable thresholds, it is tuned to the character of the material tracked. If, for instance, the material is rhythmic, amplitude onsets may be weighted more heavily than pitch onsets, and vice versa.”

Ultimately, this data is mined for pitch content and a local pulse, and at this microscopic scale the transcribed result varies greatly from standard temperament and conventional rhythms. “The pitch notation is fully microtonal, notated to the closest twelve-tone equal-tempered pitch and modified with microtonal cent deviation indications. The rhythmic notation is transcribed to the pulse of the song. Rather than transcribing to a constant pulse, the rhythmic notation is transcribed to a map of where the beat actually falls in the recording.”

The goal is to reproduce in performance what the recording machinery has ‘heard’ during the recording process. The result is akin to analyzing the DNA of a popular song and then performing a sort of exploded genetic mutation to produce music that, although very complex and unique, is recognizably related to the original. During the performance the vocal track of the original pop song is heard, and this acts as a guide for the players as well as giving the audience some helpful context.

Hearing the Happy Valley Band play is a bit like standing in front of a blast furnace – the notes pour out at a furious clip, at full rock band intensity. The Human Resources performance space has large flat walls with a hard floor, and this tended to amplify the already powerful sounds, partly at the expense of the recorded vocal track. The first piece began with a loud crash of a chord followed by some complex drumming, and the waves of sound were soon rolling out over the audience. There was no common beat – and the various parts were rapidly played with a highly complex figuration. The playing by the musicians was frantic, and notated pages flew off the music stands gathering in heaps across the floor as the piece progressed. The overall feel, however, was surprisingly organic and cohesive. The harmonic connections to the vocal track were just strong enough to unify the separate streams of sound in the mind of the listener.

The more recognizable pieces with the strongest vocal lines tended to be the most effective: songs by Phil Collins, Elvis Presley and James Brown being perhaps the most memorable. It’s a Man’s World by James Brown had the best balance between the vocal track and the instruments, the band having dialed back a bit on the volume. A fine sax solo by David Kant a added to the close-knit feeling with the original. As the set continued, different players rotated in and out. In one piece, the amplified harmonica of Sam Friedman rose to the top of a swirling texture to dominate in a most pleasing way. There were crisp violin solos, saxophone licks and many artfully played passages that quickly materialized and just as quickly disappeared. The spirited ensemble and high intensity dynamics, however, did not overwhelm the intrinsic connection of the transcribed playing to the original piece. This charm of this music is that it is like hearing an old, familiar tune – from the inside out. The Happy Valley Band continues to experiment at the ragged edge, tinkering with the genetics of popular songs to produce powerfully unique music.

A new album by the Happy Valley Band, ORGANVM PERCEPTVS, is now available as a vinyl LP and by digital download at Indexical.