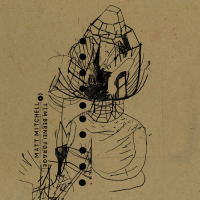 In recent years, saxophonist and composer Tim Berne has frequently collaborated with pianist Matt Mitchell, most notably in Snakeoil, a quartet in which the two are joined by clarinetist Oscar Noriega and percussionist Ches Smith. Thus, Mitchell approaches Berne’s music from a unique and intimate vantage point, one ideal for the first solo interpreter of Berne’s intricate compositions. On FØRAGE, the pianist incorporates Snakeoil tunes as well as other Berne works to craft an imaginative and exhilarating program.

“PÆNË” opens the recording with material from The Shell Game, Berne’s 2001 release for Thirsty Ear’s Blue Series, on which the saxophonist performed with keyboardist Crag Taborn and drummer Tom Rainey in a trio called Hard Cell. The original rendition of the excerpted composition, “Thin Ice,” opens with spacey synths playing a decidedly angular version of a chord progression in straight quarters. Taborn is joined by an altissimo register sax solo that then moves suddenly downward into a wide-ranging post-bop excursion; all of this is reinforced by Rainey’s questing and aggressively punctuated drumming. Mitchell’s version distills the essence of “Thin Ice,” interpreting its 6/8 section with an imaginative gloss on all three musicians’ approaches from the original recording. Thus, the synthesizer’s chords are put into the middle and upper register of the piano in less rangy spacing. Rainey’s drumming is imitated by syncopated soprano register verticals. What was Berne’s melody glides between these two formidable layers (plus additional comping and bass notes to boot), supplying a gradually revealed essay of considerable interest.

On “TRĀÇĘŚ,” Mitchell reinterprets “Traction,” material from The Sublime And., a 2003 live release by another Berne band called Science Friction, a quartet with guitarist Marc Ducret joining Berne, Taborn, and Rainey. The most relentless cut on the album, it features incendiary lines from Ducret in tandem with a fierce ostinato from Berne that eventually evolves into a mayhem of upper register howls and bristling leaps. It is remarkable how, sans the amplification employed by Ducret and Taborn, Mitchell is able to create such a sizzling version of “Traction.” The pianist’s approach leaves little from the original to the imagination, encompassing a plethora of polyrhythms and unabating riffs as well as pointed soloing of his own. Even though inherently it is repurposed for the solo medium, the intensity of the original crackles here, never more so than in the endless, forceful rearticulations of the coda. “RÄÅY” also interprets music from the Sublime And.: here the piece is “Van Gundy’s Retreat,” a tune that in the original version combines an ebullient romp with passages of mysterious sostenuto. Mitchell employs “Van Gundy’s Retreat” as the latter half of “RÄÅY:” It begins with “Lame 3,” an established Berne composition that is slated for reinterpretation on the next Snakeoil recording. While rhythmically intricate like most of Berne’s work, it demonstrates a melodic delineation that is distinctive and memorable.

Mitchell amply demonstrates that he has made various regions of Berne’s voluminous catalog his own. Crucial as he was to its gestation, it is equally fascinating to hear him reinterpret the Snakeoil material. Both “ÀÄŠ” and “ŒRBS” consist entirely of compositions from the Snakeoil albums on ECM, and “CLØÙDĒ” combines “Spare Parts” from the first (2012) album with a reprise of the aforementioned 6/8 section of “Thin Ice.” In these compositions, one sometimes hears Mitchell channeling his bandmates’ solos and accompaniment, allowing their spirits to be present in his music-making. However, just as often, the pianist takes things in different directions, lingering over a riff or harmony here, inventing a new countermelody there. Thus, Mitchell untethers his playing from the more circumscribed role he undertakes in Snakeoil.

Even Berne aficianados are likely to be stumped by some of the material here, including a previously unrecorded cut, “Huevos Expanded,” the basis for “SÎÏÑ,” a fetching, impressionist tinged ballad that serves as the album’s closer. Here Mitchell fashions undulating ostinatos and deftly pedaled passages to create whorls of colorful harmonies, buoyed by a gentle waft of swing. The piece serves as a reminder that, while at times the thread between them is tenuous, Berne’s work is not solely avant-garde in character; it also evinces connections to the modern jazz tradition.

As a whole, FØRAGE leaves one eager to take a two-pronged approach: first, delving further into Berne’s catalog to reevaluate his music afresh; second, to reacquaint oneself with Mitchell’s own compelling body of work. It is also exciting to learn that more things are afoot with Snakeoil. In the meantime, FØRAGE supplies a potent combination of captivating compositions and abundant musicality. Recommended.