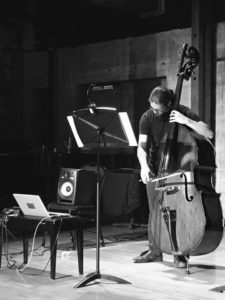 The first piece was Beast, by James Tenney and featured Scott Worthington on double bass. This opened with a series of low, sustained tones – a generally warm droning texture, but with some rough edges. The sound was more or less continuous with no pulse, save for the slight pause during the bowing. The double-stopped chords often changed slightly as they were played – when a tone went up slightly in pitch, there was an added element of tension or uncertainty. When one of the tones went down in pitch, the feeling was often more introspective and profound. The tones were sometimes very close in pitch, but not exactly, and this created something of an unsettled feeling. When the tones fell into a familiar harmonic relationship there was a sense of settled well-being. Beast continued in this way – a series of sustained chords where slight changes in pitch provided the harmonic propulsion for the passage. Although these changes were often slight and subtle, the pleasantly deep register of the double bass kept the listener engaged throughout. One could easily imagine a great beast, sighing and lightly snoring while curled up in a deep slumber. Beast is quintessential James Tenney, played in this performance with quiet authority by Scott Worthington whose ear and technique were flawless.

Matter/Moving, by Catherine Lamb, followed and for this Scott Worthington re-tuned his double bass and was joined by Matt Barbier on trombone and Scott Cazan presiding over the electronics. Matter/Moving began with a thin, high tone from the bass that was matched in pitch by a sine tone from the electronics and followed by silence. This was repeated with the addition of a second note by the bass at the end of the passage. After another short silence, the bass and electronics were joined by Barbier’s muted trombone, with all three sounds very close in pitch.

Matter/Moving proceeded in this way, with the sequential sounding of all three tones and their subsequent interactions derived from slight variations in pitch. In some cases the three pitches were so close as to produce zero-beating. At other times they combined to produce a more comfortable harmonic configuration. The clean sine tone from the electronics seemed to remain steady while the other two instruments worked off of this to create the various harmonic colors. Sometimes the feelings produced were introspective and profound, while at other times more questioning and uncertain. Towards the finish the electronics began to dominate the texture and this produced a somewhat bleak and alien feel. The bass began to climb higher in pitch and this introduced a bit of tension as well, like arriving at an desolate landscape. The playing was precise, disciplined and controlled.

Like the Tenney piece, Matter/Moving has no definite pulse or rhythm. The dynamic of this piece is also subdued – barely reaching mezzo piano – but this allowed the listener to better focus on the interactions of the tones. With an economy of musical materials and its minimal structure and form, Matter/Moving is a surprisingly expressive exploration of the hidden vocabulary of similar pitches.

Following a short intermission Coronation of Sesostris, by wasteLAnd’s featured composer Erik Ulman, was performed by Matt Barbier on solo trombone. This began with a single, loud tone that tapered off over the course a few seconds. After a short silence another was heard at what sounded to be a step higher. This continued with each succeeding pitch, as if moving up a scale. The powerful intonations by Barbier rang out through the space and then slowly decayed with a noticeable loss of energy as it quietly trailed off. The initial feelings of strength and confidence of each note morphed uneasily into a contrasting tentativeness and uncertainty. As the piece proceeded, however, more complex and rapidly-played passages emerged with ever greater variation in tone color and dynamic. The higher and lower registers of the trombone were heard. There was power and there was delicacy. Mutes appeared and were changed with great dexterity. The piece now took on a regal and powerful character – in keeping with the kingly title – before returning to the original single-tone sequences as the piece concluded. Coronation of Sesostris is a vivid portrayal of the uncertainties and ambitions surrounding the assumption of power – and could also be a challenging audition piece for the virtuoso trombonist.

The final work of the evening was No key but a possible movement, by Michael Pisaro. Scott Worthington and his solo double bass returned to center stage, along with a computer and large speaker by way of accompaniment. The piece began with a short pizzicato passage of four notes in the bass followed by answering tones from the speaker. The pre-recorded electronic track was created from processed samples of Worthington’s bass and this blended seamlessly with the live playing. The call-and-response sequence continued, with the pitches between the bass and electronics often closely matched. Eventually Worthington and the recording began conversing in bowed passages and this added a bit of drama. The closely tuned pitches began to interact and there were times when the sustained sounds achieved a distinct zero-beating growl. The low rumbling tones increased to a powerfully swelling roar, almost like standing inside some great machine.

Towards the middle of the piece some quiet was restored and long, sustained tones from the bass and speaker came together into a sweetly sorrowful and beautifully expressive mixture. Nothing touches the feelings like the lower register of a double bass, and this was brilliantly realized in both the playing and recorded accompaniment. The warm, deep sounds filled the room and then gradually subsided. The speaker then began issuing a series of soft rushing sounds, introducing a new sense of motion and activity. This eventually grew to a roar, overwhelming the bass tones entirely before fading to a whisper. At this point Worthington began applying his bow to various unconventional parts of the double bass – the strings below the bridge, the wood of the bridge itself, the purfing and even the tuning pegs. All of this produced a soft, wispy sound, similar to the that heard from electronics just prior. When the bow was again applied to the strings of the double bass, it was with such a light touch that only a quiet scratching resulted. At length these sounds faded into silence, concluding this remarkably expressive work. No key but a possible movement is a masterful exploration of the profoundly moving depths attainable by a double bass in very skilled hands.

It was announced that Wolfgang von Schweinitz will be the featured wasteLAnd composer for the 2017-2018 season, beginning in the fall.

The final wasteLAnd concert of the current season, Air has no residence, will feature the playing of gnarwhallaby and will be given at Los Angeles City College in Hollywood on June 2, 2017.