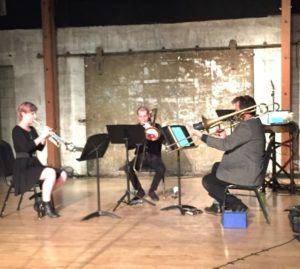 On a rainy Saturday night, March 10, 2018, Art Share LA hosted an all-brass concert of microtonal music performed by Trio Kobayashi and members of the CalArts Brass Ensemble. Six pieces were heard, including two world premiers, all presented by Microfest LA.

Plainsound Chorus (2017), by Wolfgang von Schweinitz was first, performed by Trio Kobayashi. This was a section of Cantata, a new work to be premiered in full at RedCat on May 23. Strong upward scales began the piece, and each of the three instruments – horn, euphonium and tuba – followed an independent line that gave this a busy, song-like feel. The alternate tuning was impressively realized with the valved instruments, and the predominance of low tones provided a solid foundation for the many unfamiliar harmonies. The warm brass sounds elicited a choral sensibility and the steady pulse focused the texture. As the chords moved in and out of the familiar, presenting various possible perspectives, the experience was reminiscent of viewing a cubist painting. Plainsound Chorus is a promising preview of the larger work to come.

Gravlax (2015), by Matt Barbier followed, and this was the world premiere. The composer was joined by a second trombone player and a trumpet, all muted. A static electronic recording that featured a continuous deep rumbling sound was heard through the speakers at the front of the stage, and the density and volume proved almost impenetrable. The instruments were played softly, so that they were were almost inaudible against the electronic background, and this served to focus the concentration of the listener. The muted trumpet was perhaps most effectively heard when it occasionally rose above the jumble, and these soundings provided a bright and welcome contrast. The trombones were also briefly heard, and served to add some color to the roar below. Gravlax is related to those very quiet pieces where the economy of sound magnifies its impression – in a similar way, the short flashes of brass tones rising out of the churning background multiply their effect, sharpening the listener’s acuity and expanding perception.

The premiere of Chaconne (2018) by Andrew McIntosh, was next, performed by Trio Kobayashi. This began with sustained tones in the tuba and euphonium, soon joined by the horn. The result was a series of warm, brassy chords that filled the room with some lovely harmonies. The presence of moving tones within the chord was most effective, nicely integrating the pitches selected from an alternate tuning. Seemingly disparate tones were impressively melded into the organic whole. The simplicity of this approach, combined with the cordial sensibility of the brass, made for a most pleasing combination. The intonation and tuning of the sustained tones by Trio Kobayashi was precise, with fluid dynamics in the texture that engaged the listener. This piece was finished by McIntosh concurrently with Shasta, a much larger brass ensemble work that received its premiere at Disney Hall three weeks ago. The two are very different in scope and palette. Where Shasta feels more like a narrative, Chaconne is an insightful exploration of the relationships between tuning, chords and their constituent pitches.

After the intermission, fragment, aviary, in progress (2017) by Icelandic composer Davίꝺ Brynjar Franzson was performed by Matt Barbier. This involved a muted trombone played into a microphone that processed the tones into something resembling a soft moan. This was combined with a static recording of a lightly running stream and sent through the two large speakers. The stage and audience were enveloped in complete darkness, and this nicely heightened the imaginative possibilities. The organic sounds of the flowing water were friendly at first, but as the piece proceeded the trombone part became more of a howl and the volume of the splashing water increased, inducing an instinctive anxiety. It was as if a simple hike in the wild had gradually resulted in becoming lost – the previously pleasant sounds of the stream and the wind were now alien and threatening. Ultimately, the stream became a raging torrent and the trombone produced a wild roaring that built the anxiety into a full-blooded fear. fragment, aviary, in progress is just a part of what will be a longer work. The sonic materials are very basic, but also very effective, evoking the sense of vulnerability that arises when one is exposed to raw nature in a remote wilderness.

Three (2016), by Stockholm-based composer Ellen Arkbro followed, performed by Trio Kobayashi. Matt Barbier and his trombone stood on the stage and opened with a long, sustained tone. The horn and tuba joined in from off-stage, creating some very alluring harmonies. According to Ms. Arkbo’s website, “Her sound work is heavily informed by her studies in just intonation tuning with La Monte Young and Marian Zazeela in New York and with Marc Sabat in Berlin.” All of this was in evidence as the piece elegantly unfolded; there was no beat or pulse, but rather a continuous wash of sound that evoked the contemplative. This was very much in keeping with the programmatic theme of this concert – that brass instruments can be at home with alternate tuning – Three is an ideal companion to Chaconne and Plainsound Chorus.

overlays/smear (2015), by Catherine Lamb concluded the concert program and for this the CalArts Brass Ensemble and Trio Kobayashi filled the stage in a large semicircle with an intriguing array of brass instruments. The long, opening tones were all very close in pitch – or on the octave – and zero beating could be heard. The brassy sound was accessible and welcoming, with each new set of sustained tones assembled from an unexpected mix of pitches. The piece proceeded in this fashion, solid chords – moving mostly upwards – with many different tones appearing and then fading out. Some splendid harmonies were heard, even as the pitches also ‘smeared’ together somewhat roughly at times. The contrast of the warmly familiar and the uncomfortably unorthodox was very effective, and highlighted the smooth and even playing of the ensemble. overlays/smear is an impressively large-scale examination of tones and tuning as realized in multiple brass instruments.

The performers in this concert were: