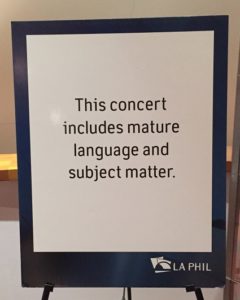 The latest installment of the LA Philharmonic Green Umbrella concert series rolled into Disney Hall on Tuesday, February 20, 2018. Music by Julius Eastman, Anna Thorvaldsdottir and a premiere by Andrew McIntosh were performed. A screening of the iconic anti-war piece L’s G.A. by Salvatore Martirano, with live performance art by Ron Athey as Politico, rounded out the program. Only a few empty seats could be seen as an eager audience settled into place.

The first piece was AURA, by Icelandic composer Anna Thorvaldsdottir, performed by the Los Angeles Percussion Quartet. This was played completely in the dark – no stage lights or house lights in the entire space. The LAPQ was just barely visible in dim outline on stage, hunched over their percussion instruments. They wore lighted green wristbands on each arm so that their movements could be seen throughout the hall. AURA began with chiming sounds and a soft rattle followed by what sounded like a bowed vibraphone tone plate. More intriguing sounds followed. The darkness, the moving green lights and the mysterious tones instantly created an atmosphere that gave full rein to the listener’s imagination. It was as if we were observing some secret ritual in the dead of winter in pagan Iceland. Ms. Thorvaldsdottir is well known for building convincing sound worlds out of unusual musical materials, and it would be hard to overstate how effectively this was accomplished here. The playing by the LAPQ – who had performed this piece before – was nonetheless remarkable given the extended techniques involved, the many notes and instructions in the score and the total darkness of the stage. AURA is a captivating experience that, despite the modest musical forces and subdued dynamics, works on the imagination in  surprising and powerful ways.

Shasta, by Andrew McIntosh followed, an LA Phil commission and world premiere conducted by John Adams. The stage was filled with a brass ensemble, timpani, percussion, a piano and harp. The composer is an avid hiker and recently climbed Mount Shasta. He writes of this experience: “Mt. Shasta is a unique mountain among California peaks, since it is a massive isolated cone located at the southern end of the Cascade range. Most of California’s major peaks are in the Sierra, which are completely different in nature, since the high peaks in that range are all surrounded by other peaks of similar height. This gives Mt. Shasta panoramic views from the top unparalleled in any other place in California, as well as a peculiarly lonely and melancholy feel.”

McIntosh is a string player by training, but has written for various other ensembles; Shasta is his first major work for brass and the piece proceeds in several short movements. The opening is filled with upward moving scales, arcing glissandos and a strong melody in the trombones so that the feeling is one of climbing a perilous mountain trail. At one point, some bowed xylophone notes sting like a blast of icy air. A trumpet sounds above some sustained tutti chords as if to announce that the summit has been reached, and here the music takes on a more mystical feel with quiet notes in the horns and piano. Towards the finish, the dynamics further soften and muted trumpets provide a strong sense of standing atop the remote heights. Shasta is an evocative and convincing portrait of both the exertion and the exhilaration of mountain climbing, and was received with sustained applause.

John Adams next introduced a short film clip in which Julius Eastman described the nature of his music and explained the origins of the controversial title of the piece, Evil Nigger. Four pianos had been moved on stage and arranged in a square so as to face each other, with Michelle Cann, Dynasty Battles, Joanne Pearce Martin and Vicki Ray seated accordingly.

The work opened with rapid runs in the separate pianos, similar in rhythm but in different registers. Each set of phrases swept like waves through the ensemble, full of motion and energy. Counting was occasionally called out by Mr. Battles, and this was the signal for all to play in unison. The piece proceeded accordingly, with a surge of phrases, followed by a tutti unison, allowing the players to regroup and gather energy for the next cycle. These sections were intricately interconnected, with each building upon the other. The program notes quoted the composer: “…there’s an attempt to make every section contain all of the information in the previous sections or else take out information at a gradual and logical rate.” The score apparently contains lots of musical notes, but not many clues as to how the parts are to fit together; the work feels a bit like a four-way, simultaneous improvisation. The pianists for this performance were confident and decisive in their playing, and this produced a most satisfactory result.

This is powerfully kinetic music, but not intimidating or full of fury. Given the title of the piece, the listener might have anticipated a more aggressive or angry feel, but there was a sense of pathos that seemed to build as the piece progressed. Towards the finish the tempo slowed, the dynamics moderated and the sections seemed to dissemble. The piece coasted to its conclusion and was received with a long standing ovation. 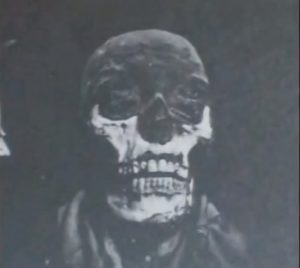 The final work on the concert program was L.’s G. A., by Salvatore Martirano and this is a multimedia performance piece from the height of the anti-war protest era of the late 1960s. A large screen at the rear of the stage displayed a film clip with a series of strange images and a loud roaring sound in the overhead speakers. The original staging instructions called for a single performer to wear an amplified gas mask and recite Lincoln’s Gettysburg Address while inhaling a mixture of nitrous oxide and helium. Narrator Ron Athey, gas mask in place, crouched in the center of a circle of light, just in front of the screen, on an otherwise dark stage. His words were electronically modified – no gases were used – but the effects were just as dramatic. As the film clip churned up its mixture of shapes and shadows, Athey slowly got to his feet and began speaking in an incomprehensible rumble. Little by little the words became identifiable, and the impression was that Lincoln’s great speech was under tremendous stress and the performer in palpable agony.

The film clip was similarly intense and quite remarkable in that it was a product of 1960s technology; there were many short clips that all had to be spliced together by hand.  Ron Nameth’s projections for this performance were entirely in keeping with the spirit of Martirano’s work.  The rough images on the screen became more distressing and less abstract as the piece proceeded, and this was matched by the anxiety and anger of the spoken words coming from inside the gas mask. It was striking how much of an anti-war piece this is and not just a anti-Viet Nam statement – most of the combat images were from the two World Wars. At the finish, Athey lay sprawled out in front of the screen, seemingly drained by the effort of reciting the Gettysburg Address under such demanding circumstances. All of the terror and repulsion for war that was so prevalent in 1968 was skillfully transmitted intact to our 21st century. Cheering and loud applause rang through Disney Hall in appreciation.