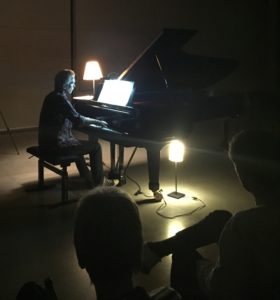 The 14th annual Dog Star concert series rolled into The Wild Beast at CalArts on June 9, 2018 and featured the Los Angeles appearance of the noted Dutch pianist Reinier van Houdt. A fine crowd assembled in The Beast despite a brush fire that shut down two lanes of the local freeway. Four contemporary solo piano pieces were on the program as well as Concert for Piano and Orchestra, by John Cage.

Layers for Piano, by Nomi Epstein, opened the program and began with a series of soft, single notes followed by brief chords. A deep rumble was occasionally heard in the lower registers, but the opening pattern of a few notes plus a simple chord persisted as the piece proceeded. The phrasing was consistently spare but engaging, with a quietly mysterious feel. The emotional delivery was impressive given the economical use of sound and masterfully restrained touch by van Houdt. The soft nebulous edges of Layers for Piano artfully evoked a comfortable float on a feathery cloud.

More quiet music followed with Pythagorean Study for piano and electronics, by Andrew Young. Short two-note chords separated by silence were repeated, as if some signal were being transmitted. As the piece proceeded this muted pattern repeated, with the notes changing pitch or played in a different register. The overall effect was to create a wistfully nostalgic sensibility from just this simple construct. The soft keyboard playing by van Houdt was the critical element here, and the listening was like basking in a collection of warm memories. Also, by Jennie Gottschalk followed and this displayed a similarity to the Young piece in that it consisted of quietly simple chords. These included dissonance as well as a somewhat darker tone in the lower registers. Although carefully subdued, Also contained a slightly sinister feel that was enhanced by the accelerando towards the finish. Rapid high and low notes completed the drama at the ending.

Trapani, by Jerry Hunt followed, and this 1989 solo piano piece provided a lively contrast to the more reserved music heard in the program to this point. Strong tremolos rippled through the highest and lowest registers of the keyboard producing an agitated feel full of anxiety and tension. A great wash of notes continued with a distinctly fluid feel, like some darkly churning waterway in full flood. The dynamics rose and fell like a surging tide, cresting to an impressive level, only to pull back again. The texture was a mass of continuous motion, as if driven by waves on a stormy sea. The extended tremolos, the variations in volume and intensity were all skillfully executed by van Houdt, whose precise control over the keyboard never wavered. Trapani is an expressive and animated conjuring of the powerful natural forces at work all around us. 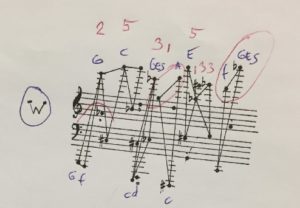 The final piece on the program was Concert for Piano and Orchestra, by John Cage. Mr. van Houdt was joined by an instrument section consisting of cello, violin, bassoon, flute and viola. Written for David Tutor, Cage’s construction and notation for this piece allow a wide latitude for interpretation by the piano soloist. The piano score is a series of loose pages, each with a condensed form of notation, and are played in whatever order the pianist determines at the moment. The instruments in the orchestra are supplied with several pages of notated staffs and although there are no bar lines marked or tempos specified, each staff is assigned a duration of one minute. Accordingly, the instruments are synchronized by stop watch while the pianist plays independently. The soloist leads in the sense that there is always something heard from the piano. This may be a run of notes, cluster chords or perhaps a bit of a melody. There were extended techniques as well – plucking of strings inside the piano and knocking on various external parts of the wood case. The instruments accompany with independently sustained tones or short phrases and there is no common beat or pulse.

This arrangement actually works quite well. The piano is the most active part, and the notes bounded up and down the keyboard with a sense of playful energy. Van Houdt seemed to be in constant motion, as if chasing a kitten around and through the piano. The instruments filled in solidly so that the texture was constantly changing but always engaging. Although the piano and instruments are intentionally disconnected, there is a surprising cohesiveness to this piece as it uncoils with a delightful unpredictability. That Concert for Piano and Orchestra takes such breathtaking chances with its indeterminate structure and yet achieves such a captivating result is a testament to the artistic vision of John Cage, and irrefutable evidence of technical mastery by those who undertake its performance.

This concert was made possible, in part, by support from the Netherland-America Foundation.

In addition to Mr. van Houdt, the performers in this concert were: