The Music of Juan Pablo Contreras at USC 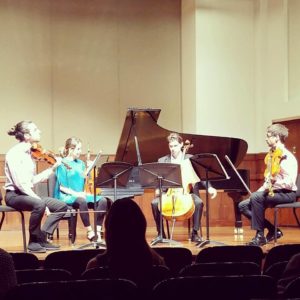 On Saturday, September 15, 2018, at the Newman Recital Hall in the heart of USC, the music of Juan Pablo Contreras was heard in a concert titled The Sounds of Mexico. The occasion was his final DMA recital, and only a few empty seats could be seen in the spacious hall on a sunny summer afternoon. The concert was presented jointly by the USC Thornton School of Music and the Consulate General of Mexico in Los Angeles. Juan Pablo Contreras is already one of the most prominent young composers in Latin America. His music has been widely performed by major musical institutions including the National Symphony Orchestra of Mexico, the Salta and Cόrdoba Symphonies in Argentina, the Mexico City Philharmonic, the Simόn Bolívar Orchestra of Venezuela and the Waco Symphony in Texas.

Juan Pablo Contreras combines the Western classical tradition with Mexican folk music. He has a keen interest in the diversity of Mexican culture and a demonstrated gift for orchestration. Much of his work involves chamber music as well as that for full orchestra, and while at USC Mr. Contreras studied with Andrew Norman. For this concert, however, the focus was on smaller musical forces – piano and cello, a string quartet and a quintet with woodwinds, strings and piano. The largest piece in the program was for a full chorus and piano, and this concert was an opportunity to listen for new levels of detail and design.

The program opened with Souvenirs (2018), a four-movement piece for piano and cello. Based on the composer’s extensive travels, Souvenirs captures the remembrances and experiences of living in several different cities. “New York” was first and this began with sharp pizzicato phrases in the cello that morphed into a jazzy blues. As the piece progressed, a moving piano line nicely recalled the syncopated sound of a lurching subway car. More blues followed, along with added complexity that evoked a strongly African spirituality. The composer’s time at the Manhattan School of Music clearly left a lasting impression. “Paris” followed, and the cello passages here turned smoothly elegant, especially in the lower registers. Lush harmonies and an expressive melody added to the romantic feel. A vivid cello solo by Benjamin Lash towards the finish was evidence of the composer’s command of lyricism and dynamics.

“Moscow” was next, and this had a rapid, rhythmic movement that gave this piece a slightly out-of-control feeling, especially in Alin Melik-Adamyan’s piano line. Intense and almost relentless, the tension seemed to be continually building until a sudden silence signaled the abrupt ending. The final movement was “Mexico City” and this began with a distinctly abstract feel that emanated from a complex surface texture, recalling the vibrant diversity of that city. As the piece continued it became increasingly upbeat and playfully familiar, before turning slower and nostalgically wistful. All of this was nicely captured in the composer’s characteristically mature style. A final crescendo and accelerando completed “Mexico City” – ending Souvenir with a rousing finish.

The second piece on the concert program, Voladores de Papantla (2017), was written for string quartet. The Voladores de Papantla, from the Veracruz region of Mexico, perform a spectacular folk ritual involving a 30 meter high pole. Five voladores dressed in colorful costumes climb to the top of the pole where four of them tie themselves to ropes, jump off backwards into space, and slowly twirl their way back down to earth. The fifth voladore remains on the top of the pole and presides with chants and prayers, playing a simple flute. This ancient observance is unforgettably dramatic and deeply significant to the Totonac peoples of the area.

The music for Voladores de Papantla is made up of seven sections that are played in succession with no pause, each describing a part of the Totonac ritual. The piece opens softly with a high, mysterious melody in violin I, which nicely recalls the flute invocation by voladore priest. The very high register in this passage was precisely played by Alexandros Petrin, whose careful intonation yielded a clear and steady tone. A sense of drama ensued as the voladores made their way up the pole. More thin notes were heard in the violin as the priest blessed the Voladores, about to hurl themselves into the air. A flurry of intense and complex passages followed, along with a feeling of tension and suspense as the voladores hurtled downward. After the descent, the priest plays a farewell and the warmer harmonies in the other strings carry a comforting feel. Voladores de Papantla is a well-crafted and heart-felt tribute to one of Mexico’s the great sacred traditions.

Next was Pueblos Mágicos (2017), a remembrance of the composer’s summer visits to small, rustic villages while growing up, portraying his appreciation of their charm. This three-movement piece called for clarinet, flute, violin, piano and cello. “Madrugada”, the first movement opened with a bright flute melody accompanied by arpeggios in the piano. The luminous texture recalled those early morning moments at dawn in the pueblo when the sun is rising, yet still below the horizon. The tempo increases and a syncopated rhythm becomes more active, as if the village is waking to begin their chores. “Canciones Lejanas”, the second movement, follows with a slower, steady feel that gives way to a waltz, as if the pueblo is fully engaged in their work. A drowsy section follows – siesta time – and the strumming of the strings inside the piano by Alin Melik-Adamyan evokes the inevitable guitar heard in the village square. Finally, a loud, dissonant call in the flute and clarinet rouse the villagers from their repose to signal the start of the third movement, “La Fiesta.” Repeating piano figures and a boisterous dynamic add to the joyful mood as the swirling texture convincingly captures a plaza filled with dancers. Pueblos Mágicos is a pleasing homage to the everyday rhythms and customs of a small rural village.

After an intermission, The Simple Life (2016, arr 2018) completed the concert program and this piece included a full choir accompanied by piano. Commissioned by the Riverside Church in New York, The Simple Life is intended to portray the diversity of that congregation and consists of five movements, each with a distinct poem that provides the vocal texts. “A Tide in the Affairs of Men”, with poetry by Michael Hogan, opened the piece with warm chords and a fluid harmony, inspired by the harbor that is the heart of the city. The singing turns darker, however, especially in the tenor and bass sections, as the text describes the homelessness and despair that is also present: “Yes, the homeless are trapped in a hellish dream and hunger and fear in a silent scream.” Movement 2 followed, “Ca Tlamati Noyollo”, and this has a busy feel that flowed from the purposeful rhythms and artful layering of the voices. The text is by Nezahualcóyotl, a 15th century warrior/philosopher from the Texcoco region of pre-Columbian Mexico. His short poem was inspired by the simple contemplation of a flower, and this sparks a noticeable grandeur in the melody. The singing was exquisite, and all the more impressive given that the text is in an ancient language.

The third movement, “La Vida Sencilla”, is Spanish for “The Simple Life” and is based on poetry by Octavio Paz. The simple life is: “to drink and seize life while drunk; to dance the dance without missing a step;” The poem covers quite a bit of ground and the music varies from the dramatic and triumphant, to the broadly majestic. The dynamic changes and extensive harmonies were all attentively managed by the choir. Movement 4, “La Croyance”, or “My Faith”, is based on a poem in French by Léonard Matton. The singing was quietly mysterious and appropriately prayerful, matching the devotional nature of the text. With lines such as: “I nurture my faith and my hope for better days” the piece proceeded with calm assurance in all voices. The final movement, “Barter”, was in English, with an upbeat text from the poem by Sara Teasdale. The music was bright and lively, with the voices entering in cheerful layers. A sense of joy combined with optimism came through in the singing, and from lines like “Spend all you have for loveliness, buy it and never count the cost.” 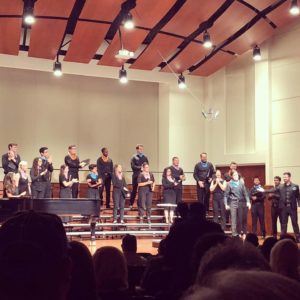 The Simple Life was well-sung by the choir, even with all its many different languages, and the voices were always engaging and in good balance. It was the perfect finish for a well-crafted concert that invited the audience to experience new places and cultures through contemporary music. A long standing ovation followed.