wild Up in Santa Barbara 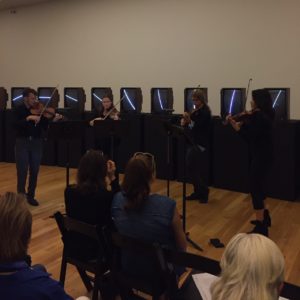 The Santa Barbara Museum of Art hosted the violin section of wild Up on Thursday, September 27, 2018 for a concert of new music titled Gradient. A good crowd materialized, despite the fact that the outside of the museum was cloaked in scaffolding and fencing for an extensive renovation. The Davidson Gallery was the venue, and this space also contained TV Clock, the video installation by Nam June Paik, inspiring wild Up violinist Andrew McIntosh to program four innovative contemporary works.

The first piece on the program was Situation IV, a solo violin piece by Anahita Abbasi. This was performed by McIntosh who explained that his violin was prepared by applying putty to the strings, as specified in the score. This seemingly minor modification completely changed the sound of the instrument. The notes that resulted from the initial bowing of the strings were almost percussive in character. Sustained arco bowing yielded distinctively rugged tones that included a high, scratchy component, while softer tones had a thin, mysterious feel. There were an amazing variety of sounds produced as the piece proceeded, and a short pizzicato stretch sounded a bit like distant gun shots. The overall feeling was often remote and alien, at least in part because of the unusual timbres that were heard – the typically dramatic and lushly familiar violin tones were completely absent. Situation IV is a striking example of how a small, simple change to the structure of an instrument can yield completely unexpected sounds and colors.

McIntosh was joined by violinists Lina Bahn, Adrianne Pope and Nigel Deane for the second piece, Violin Phase, by Steve Reich. One of the bedrock works of classical minimalism, Violin Phase explores the musical implications of a series of similar phrases played at slightly different tempi. One of the violinists wore an ear piece with a click track to keep the reference time, while the others adjusted their tempi slightly as they entered in a sort of layering and looping process. The result is that the violins slowly go in and out of sync with each other, and these interactions – plus a strong rhythmic component – produce surprisingly alluring music. It was a treat to hear this piece in such close proximity to the performers; most of the videos and recordings of Violin Phase take place in cavernous concert halls. The detail and surface textures audible in this space were superb, even allowing for the somewhat reverberant character of the gallery. The crisp tempo, catchy melody and the intricate weaving of the parts as they phased in and out worked their magic on the audience, who were clearly enjoying the groove.

Gradient, by Tashi Wada followed and here the video installation TV Clock assumed a prominent role. TV Clock is a series of 24 identical color video monitors mounted on pedestals and arranged in a shallow arc across the gallery space. Each monitor displayed a single straight line. The line on the first monitor was vertical and subsequent monitors had their lines posed at incremental angles such that the line was rotated through 360 degrees by the 24th monitor in the series. Two large speakers were located at each end of TV Clock. As the gallery space darkened, each speaker sounded a separate tone – one pitched at C and the other at a lower G – a fourth apart. The sound seemed pleasantly benign, if somewhat remote, but with the close listening promoted by the darkness, it soon became apparent that small variations were occurring between tones, and this added a sense of mystery. It was only after some focused listening that Andrew McIntosh was spotted making his way in the darkened space between speakers. He had begun by playing C on his violin, starting at the first speaker, and slowly lowered the pitch as he walked towards the far speaker, sounding the G. The almost imperceptible changes in the mix of pitches resulted in a particularly engaging sound, and even this small human input was enough to make an audible difference. McIntosh’s sense of pitch gradation was impressive as the piece took several minutes to complete. The 24 monitors of the TV Clock installation guided the rate at which he lowered his tone, making a perfect visual connection to the music. Gradient and TV Clock seemed made for each other and represent a fine example of how sometimes the simplest experimental ideas are the most compelling.

The final work on the program was Eight Whisk-us, by John Cage. One of Cage’s later works and based on poetry by Chris Mann, this piece has two versions: one for voice and, for this performance, one for solo violin. According to the liner notes by Nick Wilson for the original CD release, the music is arranged “…such that the vowel and consonant qualities of the poem are transformed into various bowing positions, gradations of bowing pressure, and forms of articulation…” With the space still darkened from the preceding piece, McIntosh began Eight Whisk-us with a short opening phrase that was high and thin in pitch, elusive and almost vaporous in texture. More thin and ghost-like tones followed, quietly floating through the Davidson Gallery. There were slight pauses between sections of ‘text’ as the piece proceeded, all very subdued. When the violin was played in its middle registers, the sound became more substantial and familiar, but there was never anything loud or dramatic. The darkness again invited close listening of this intriguing music, convincingly Feldman-like in its reticence.

A loud ovation followed and was sustained as the other musicians joined McIntosh for the final bows.