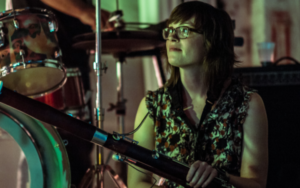 Season six of the wasteLAnd new music concert series began on Friday, October 5, 2018 at Art Share LA in downtown Los Angeles. Katherine Young is the featured composer this season and her work was front and center in a program consisting of three of her pieces, including a world premiere. Ms. Young stated in the liner notes that “…each of these pieces to different degrees and in different ways blur out of linear ‘musical’ forms and into sonic meditations through the use of drone, saturating textures, and/or spatialization.” The ample Art Share space was filled to capacity with an expectant audience, despite the brutal Friday night traffic.

Ms. Young’s first piece was Earhart & the Queen of Spades, performed by Nicholas Deyoe on electric guitar. Deyoe was surrounded by an imposing array of foot pedals, cables, assorted amplifiers and a table full of found objects, including several small personal fans. As the piece began, Deyoe switched on the fans and when they were held near the guitar pickup, a soft, thin whine could be detected. The flexible rotating fan blades were next applied directly to the guitar strings and this produced a powerful roaring, much like a motorcycle revving up. These sounds were looped, processed and piled one on another until a great sonic mountain seemed to fill the performance space. A steel slide was used on the strings to change the pitch of the roaring, and Deyoe’s deft control of the intonation was notable. All of this proceeded without a steady pulse or beat as more objects were applied to the guitar. A broad plastic card produced some especially powerful riffs and a pearl necklace was pulled across the guitar strings, yielding a series of distinctively ragged pulses. The wide variety of sounds was unexpected and surprisingly intense; Deyoe was all over the instrument and his feet were in constant motion pressing foot pedals with a masterful choreography. Earhart & the Queen of Spades ended quietly with a return to the buzzing fan blades held just off the guitar pickup, and switched off one by one. Cheering and a loud ovation ensued for a fine performance.

Underworld (Dancing) followed, and this featured Matt Barbier on euphonium and Wells Leng playing a rare Wurlitzer on loan from Tim Clark. Underworld (Dancing) began with a series of long, mournful growls in the euphonium accompanied by soft tones in the Wurlitzer. The extremely low register was expertly negotiated by Barbier, especially given that the piece was originally scored for tuba. The two parts were mostly unconnected, allowing for ample improvisational freedom, and the result was an intriguing mixture of timbres and tones. At times the Wurlitzer broke into brief snatches of melody that approximated a dance tune while the deep rumbling in the euphonium provided a solid, visceral punch. The low, dark tones suggested a large, powerful animal and the Fafnir dragon leitmotif from Wagner’s Ring Cycle came briefly to mind. Underworld (Dancing) conjured much imagery from just two instruments, and evoked a convincingly exotic world in sound.

After the intermission the concert concluded with the world premiere of Biomes 1.0. Matt Barbier returned with his euphonium,  accompanied by Weston Olencki on trombone. The composer also joined in, playing bassoon. The piece involved a full compliment of electronics and lights so that the stage was covered with various boxes, keyboards and tangles of cable. Biomes 1.0 began with a loud rushing sound in the electronics and bright lights flooding the performance space. The instruments produced clusters of uninhibited grunts and growls, adding to a dynamic atmosphere, as if deep in a forest habitat. The lights were suddenly extinguished, and as the space plunged into darkness,  soft tones floated quietly out of the euphonium and electronics. This understated feel made for a stark contrast with the first section and suggested an almost liquid environment. The deep, languid sounds were perfectly realized in the low registers of each instrument. The lights returned, accompanied by more electronic scratching sounds, along with some amazing tones from the horns. As the piece proceeded, the stage was alternately lit and darkened and the sounds changed accordingly. At one point, colored lights pulsed separately in each corner of the stage. In another section, a chain was slowly lowered on to a snare drum head, adding an intriguingly subtle percussive element. Perhaps the most impressive stretches consisted of long, low tones coming from the horns and bassoon. Ms. Young has a fine sense of what works in these lower ranges – each part was well-placed and balanced nicely against the electronics. There were some beautiful mixtures and timbres heard, also a credit to the solid sense of ensemble. A long, low crescendo followed by a soft fade-away concluded the piece. Biomes 1.0 is an impressive composition of lights, electronics and instruments that captivates with beauty and by the masterful use of the very lowest tones. A long and enthusiastic ovation followed.

The fund raising efforts at wasteLAnd have proven successful enough to make admission to the first three concerts of the new season free of charge. Their goal is to extend this for the balance of the season and those willing to donate are encouraged to contact them via their website.

The next wasteLAnd concert at Art Share LA will be on November 16, 2018 and will feature Ashley Walters and the Arperture Duo.