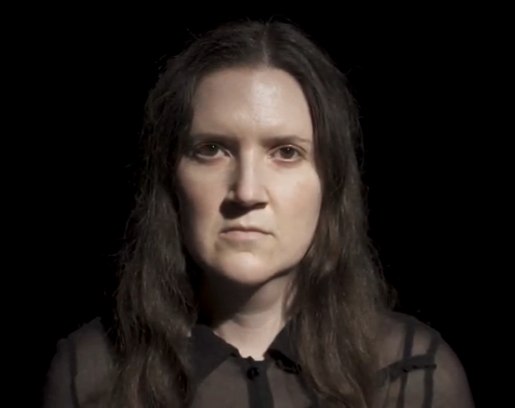 On January 29, 2021 the wasteLAnd ensemble streamed the premiere of Voice Fragments, by Davíð Brynjar Franzson, featuring soprano Stephanie Aston. WasteLAnd is one of the anchors of new music here in Los Angeles and it is encouraging that they are finding ways to stay active during the pandemic. Voice Fragments was commissioned and developed for streaming and represents an adoption of the technology into the art rather than just an online presentation of a typical musical concert. The streamed premiere was of high quality in both sound and video, with Ms. Aston capably carrying the production with her visual presence and superb voice.

The video opens with Ms. Aston framed against a black background, shown from the shoulders up. Her face has a determined look, but full of that cool reserve so characteristic of her performance demeanor. Birds are heard chirping and there is the distant roar of a car along a roadway. After a few minutes of only outdoor sounds, Ms. Aston joins in with a clear, steady tone, held for a few seconds. Electronics enter, and there is another sustained vocal tone with the same pitch, duration and purity. The sounds of nature are heard throughout, including what seems to be the rush of a gentle surf. The image of Ms. Aston goes in and out of focus at times while her vocal tones continue. This establishes the basic format of the piece: the field recording of birds and outdoor nature, a subdued electronic accompaniment and peaceful vocal tones from Ms. Aston. The overall effect is restful and full of nature with the voice adding a welcome human element.

As Voice Fragments proceeds, variations emerge as the effects cascade. A looped vocal is heard simultaneously with the live tone at a slightly different pitch, creating a tender, ethereal harmony. A deeper pitch from the voice adds a sense of depth while at other times a low bass tone in the electronics serves to underline the vocal phrases above. The electronics never overwhelm and the field recording remains a loud chatter of birds, occasionally dominated by mechanical sounds. Ms. Aston maintains the same neutral look on her face throughout while singing with solid discipline.

Towards the middle of the piece, the jet black background dissolves into a large garden window, looking out on a sunny suburban yard. This acts to accentuate the barrier between the human voice and the sounds of nature. The twittering of birds becomes more prominent as the scene is now visually green and natural. Ms. Aston’s voice is heard as before, and her ghostly image appears to float in the center of the window. The scene soon reverts to the black background with Ms. Aston in the center and there is the loud roar of a passing automobile. Vocal tones are heard as the background image changes again, another window looking out over the front yard with a tree in the center. The chirping of the birds seems to increase and is joined by the distinctively shrill squealing of squirrels. Further variations on these scenes follow – another window view, this time of a side yard, the return of the jet black background, Ms. Aston’s image appearing and fading along with more or fewer natural sounds from the garden.

The juxtaposition of the natural sounds with Ms. Aston’s hovering visage and plaintive tones combine to persuasively convey a longing for communion with nature, even if only in the modest garden of a suburban yard. The compelling sounds of the bird calls and squirrel chirps seem all out of proportion to their humble suburban source; the field recording throughout is extraordinary in its detail and variety. The steady vocals in accompaniment serve to magnify the human yearning for a re-connection to nature while at the same time mourning our self-imposed isolation from it. The poignant voice of Stephanie Aston, working with economical musical materials, nevertheless achieves a high level of expressive power.

Voice Fragments succeeds through a solid combination of skilled video technique, excellent recordings of nature and masterful singing. Voice Fragments skillfully captures the tension between the restraints of civilization and the liberating freedom in nature that is our instinctive desire.