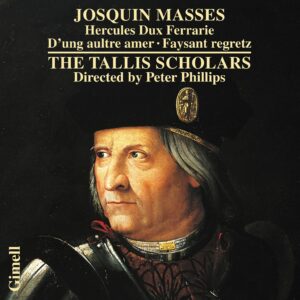 While scholarly consensus on Josquin’s birthdate has moved around over time (current estimates are around 1450), his death was in 1521, five hundred years ago. To mark this anniversary, three of the best ensembles singing early music have released recordings devoted to the composer’s works.

The Tallis Scholars began their Josquin masses recording project decades ago, and this program of Missa Hercules Dux Ferrarie, Missa D’ung aultre amer, and Missa Faysant regretz completes their cycle of these totemic works with a ninth recording (on a previous CD, they even included a mass that may be by Bauldewyn or Josquin, just to be safe). They have saved some of the best works for last. Missa Hercules Dux Ferrari is the first known soggetto cavato mass, mapping syllables of the name of its dedicatee, Duke Ercole I D’este of Ferrara, onto solfege syllables. The motive is repeated a number of times, often in the texturally prominent tenor voice, commemorating the dedicatee resplendently and demonstrating a technique that would be taken up by a number of composers. Missa D’ung aultre amer is an earlier and relatively compact work, with more syllabic and homophonic writing than one often finds in Josquin. It uses a rondeau quatrain by Johannes Ockeghem as its principal building blocks. Unusual yes, but also fascinating and fetching. Missa Faysant regretz is based on a three-part rondeau that is either by Gille Binchois or Walter Frye. The mass is saturated with a four-note motive that appears more than 200 times; it is divided up among all of the voices and appears in various rhythmic guises. Faysant regretz rivals Missa Hercules in compositional virtuosity. While retaining a number of longtime personnel, the Tallis Scholars sound vivacious and well-balanced from sonorous basses to shimmering upper sopranos. They keep a crisp pacing throughout, and the rhythmic verve they demonstrate serves to clearly delineate the counterpoint in all three masses. 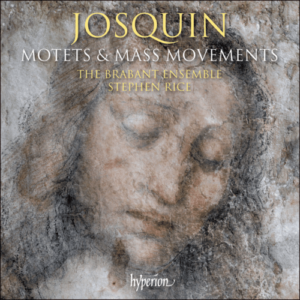 A collection of motets and mass movements are featured on the Brabant Ensemble’s recording. Ricocheting entrances contrast sumptuous, widely spaced verticals in O Bone et dulcissime Jesu. Pungent dissonances and imitative counterpoint enliven a setting of the Stabat Mater. The included mass movements, rather than being part of an Ordinary cycle, are freestanding. The Gloria de beata virgine and the Sanctus and Benedictus de Passione are easily as musically substantial as sections of complete mass settings and serve as a reminder that, irrespective of the way in which Renaissance music is often presented in concert and on disc, service music in practice was far from a tradition of monolithic cycles. The Brabant Ensemble and Stile Antico share some personnel, notably Helen, Kate, and Emma Ashby in the soprano and alto sections. The singers in both groups create a warm and impressively blended sound. 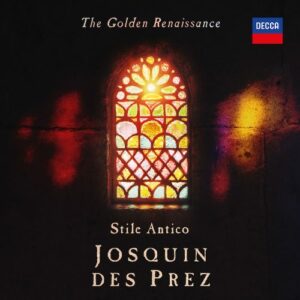 Stile Antico’s first Decca CD features a premiere recording of the beautiful chanson Vivrai je toujours. The rest of their selections include some “greatest hits” – Ave Maria Virgo Serena, Inviolate, integra, et casta es, Salve Regina, and a charming but slightly incongruous inclusion of El Grillo. The centerpiece is Missa Pange Lingua, a paraphrase mass from late in Josquin’s career that employs one of the central hymns of the Catholic liturgy. Stile Antico takes a spacious approach to the mass, with relaxed tempos and impressive delineation of the pervasive appearances of the hymn that define much of the mass. Two laments on the death of Josquin, Dum vastos Adriae fluctus by Jacquet De Mantua and O mors inevitabilis by Hieronymus Vinders, provide a fitting and stirring conclusion to this compelling recording. If asked to choose I would say: get all three.