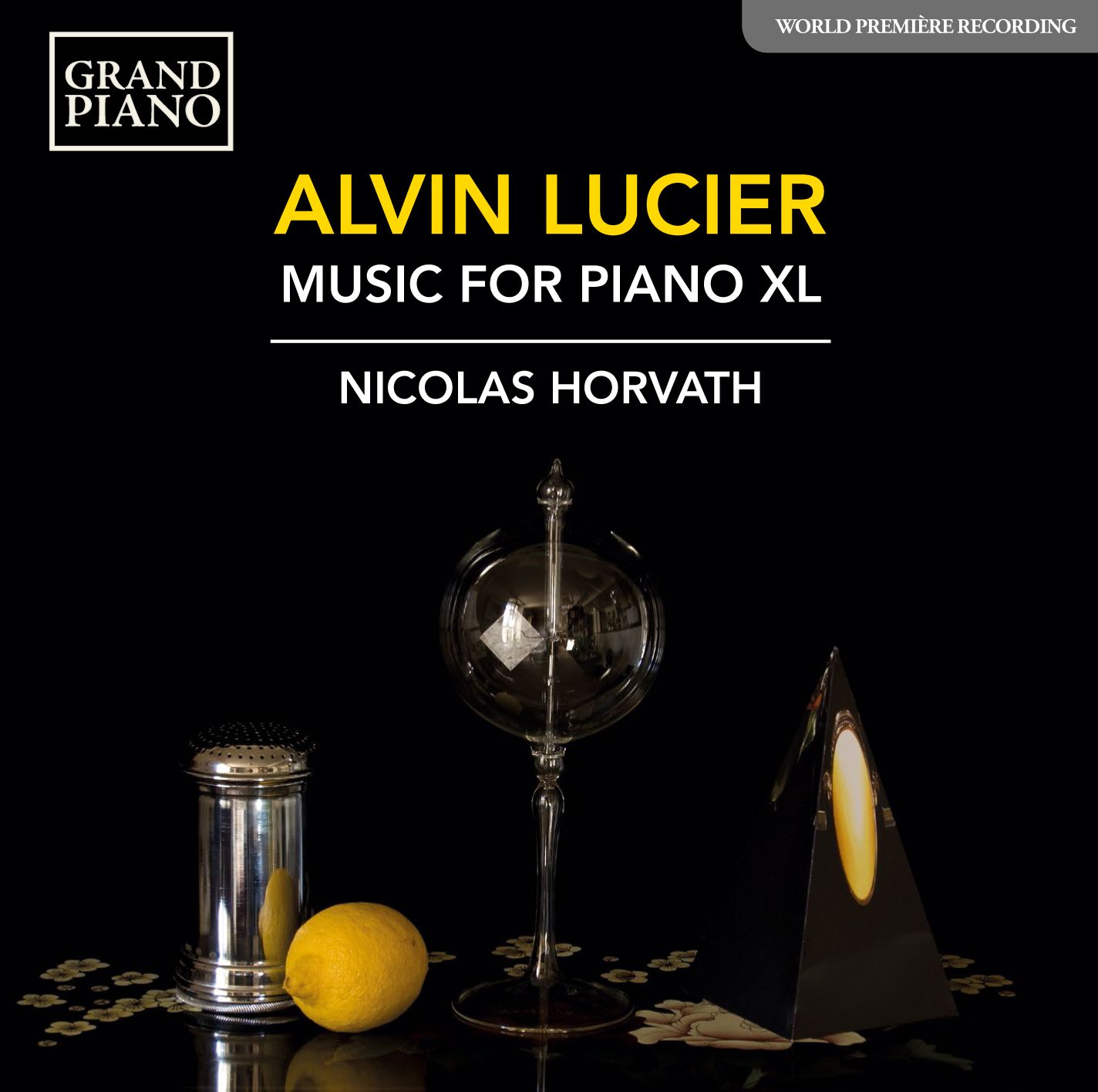 Grand Piano Records, a Naxos recording label, has released Music for Piano XL, a CD premiere of experimental music by Alvin Lucier performed by award-winning French pianist Nicolas Horvath. Music for Piano XL extends Horvath’s exploration of contemporary composition that has featured works by Philip Glass, Dennis Johnson and Karlheinz Stockhausen as well as the piano music of Erik Satie and Claude Debussy. Lucier’s Music for Piano with Slow Sweep Pure Wave Oscillator XL is the formal title of the single track on this CD, and it is exactly that, with a duration slightly over an hour. Horvath writes that the listening experience is “immersive, intense and enigmatic…”

Alvin Lucier (b 1931) is an American who is noted for incorporating acoustical phenomena as an integral part of his compositions. Perhaps his best known work is I am Sitting in a Room, from 1969. in which a recording of those words is played and re-recorded in a large open room. With each recorded iteration, the sounds of the words are rounded off as the acoustic of the room imposes and reinforces its characteristic resonances. Eventually, a sort of ghostly image of tones is all that remains, stripped of intelligibility but filled with a deep sense of introspection.

Auditory perception forms another important aspect of Luciers work. In these pieces, the listener is often surprised and enlightened by the differences between the sound heard by the ear and the perception formed by the brain. I once attended Lucier’s Outlines of Persons and Things (1975), a sound installation that projected a pure electronic tone from two strategically placed speakers in a reverberant acoustic space. Listeners were invited to walk through the space, altering the intensity and deflecting flow of the sound waves in the room. Special objects were also placed in fixed locations to scatter or focus the sounds bouncing off the walls and people. The result was that the electronic pitch and volume varied according to the position of the listener and in many places the differences over just a few feet were startling.

“Given Lucier’s fascination with the impact of resonance on various sonorities, it should be no surprise that many of his compositions featuring conventional musical instruments involve a piano. Curiously, though his music defies conventional concepts of melody, harmony, and rhythm and often explores intervals not easily produced on a keyboard, Lucier frequently composes at the piano in his home, sometimes listening intently to the sonic envelope of single tones as he strikes them over and over.”

Music for Piano with Slow Sweep Pure Wave Oscillator XL represents one of Lucier’s furthest inquiries into the idea that purely acoustic phenomena can sustain and propel a performance piece. The striking of a piano string combined with clean electronic tones gives rise to a variety of interactions and ‘beating’ when the pitches are closely matched. This composition is informed entirely by the character of these interactions – how they arise, persist and decay. The XL version on this CD was created specifically for Nicolas Horvath and has been expanded to over an hour from the original 15 minutes. This was recorded on one take, with the pianist having to continuously evaluate the sounds after striking each precisely notated keystroke and making suitable adjustments in timing or volume as the piece proceeds. The electronic oscillator continuously produces two tones that sweep over a range of four octaves and the distilled purity of these sounds is always in stark contrast to the warmer tones of the piano notes.

The intensity of the electronics seems to vary over the course of the piece, sometimes in the forefront and sometimes more like a background accompaniment. Similarly, Horvath varies the striking force on the piano keyboard to produce a note that will intersect with the electronics for maximum effect. When the electronics are the most dominant, the brain tries to reconcile the purity of the electronic pitch with the more familiar timbre of the piano. As the sounds interact, they tend to overlap and blur the differences so that the listener is left to decide if it is a sterile tone or a musical note that is being heard. The act of determining and evaluating one’s acoustic perception makes this an engaging and instructive work.

The piano notes and the electronics often change register, moving around between low, middle and higher pitches. Sometimes there is little or no observable interaction between the notes and tones. Often the lower registers produce the most perceptible beating, creating almost a rumble. When several piano notes are sounded together against a closely pitched electronic tone, a more complex series of interactions often results. In general, when the electronic tones and piano notes are both strong – and close in pitch – the interactions are most pronounced. But this falls along a wide spectrum of possibilities, seemingly different for each new combination of pitch and force. Towards the finish of the piece, a wobbly higher tone is heard softly accompanied by piano notes. The piano notes then cease while the electronic tone continues on for last two minutes, finally slowing and fading out at the finish.