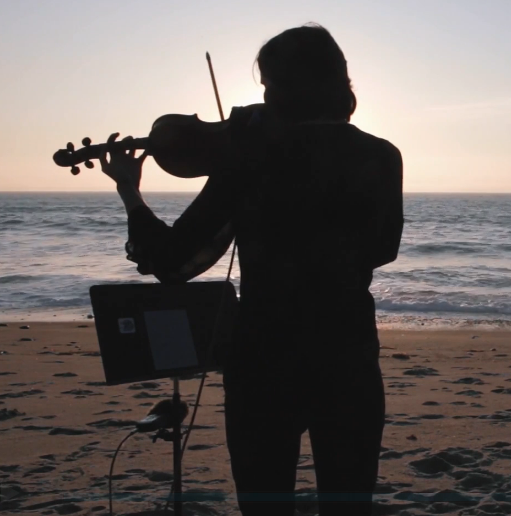 The March 2021 offering from Music for Your Inbox is Hodad, a new video by Daniel Corral performed by violinist Myra Hinrichs. This work audaciously combines the Southern California surf with a solo violin played on the beach to create a unique collaboration between artist and nature. The program notes state: “At the beach, a violinist watches the waves roll in and out. The ocean becomes a score. Spot a wave in the distance. The wave crests; the wave washes up on the shore; the wave retracts and disappears into the sea. Play according to the wave’s movements.” The result is ostensibly a relaxing 21 minute interlude on a sunny beach, but there are surprising musical insights as well.

Nature has historically been a subject for emulation in music and there are many examples from contemporary composition: Olivier Messiaen used birdsong extensively in his Catalogue d’oiseaux, The Wind in High Places, by John Luther Adams perfectly captures the chilly peaks of Alaska, River of 1000 Streams by Daniel Lentz flows powerfully down to the sea and the music of Jeffrey Holmes is full of fierce Nordic weather. And these are just a few of the many recent pieces that could be cited.

Hodad differs from the conventional treatment of nature in music, however, by making the ocean an integral partner in the composition and the performance. This might seem impractical – apart from bagpipes or a massed brass band, acoustic instruments intended for the confines of the concert hall would seem to be no match for nature outdoors. The violin in Hodad is fitted with a pickup, but even so, it would be hard to imagine a greater imbalance than that between a single violin and the Pacific surf. Yet it is this one-sided combination that is the key to the piece.

Hodad opens with the camera looking out to the open sea with the sound of the waves rolling up on the shore. Myra Hinrichs is seen facing the surf, with her violin and music stand. She soon starts off with a soft, sustained tone that begins when a wave washes up to the beach. There is no attempt here to make the violin compete with the surf; this is intentional as the composer is also the sound engineer for this performance. The camera work by Tim Lacatena is properly static, with the ocean and Ms. Hinrichs sharing the scene equally. As the piece continues, the violin seems, at times, to be loosely coordinated with the wave action, but always with soft, sustained tones. It should be noted that the ocean that day was absolutely typical for the season – low rolling waves with an afternoon breeze and a slightly hazy sky. There was no drama in the water, everything on the otherwise empty beach was entirely normal.

The surf, tame by the standards of the ocean, nevertheless completely dominates the sound from the violin. A few tentative pizzicato notes were seen on the video, but these were completely inaudible. The sound mixing keeps the surf in the foreground and invites focus and close listening to hear the violin. The result of this is that the sounds of the surf are more vivid to the listener and a wide variety of details are heard that might otherwise be ignored by the brain. In a sense the ocean has stolen the show, but this is only possible because the surf a participant in the performance. The roll of the incoming waves, the rattle of sand and stone in the surf along with the hiss of a wave running up on the beach are all heard with a new clarity and detail. Without the violin, the listener hears the wash of the surf as a kind of sonic wallpaper – with the violin, the waves become a second instrument.

The fragility of the violin in the salty air and strong breeze is obvious in the video. The disciplined playing by Ms. Hinrichs is critical – meant to compliment the surf and not to dominate or even equal it. Hodad is a metaphor for the relative spheres of influence – the violin in the concert hall and the surf outdoors. One is full of quiet introspection, the other has unlimited energy, but in this piece both can be examined by the listener in the same context. Hodad is an ambitious piece, if only for including a force of nature into the performance. A sunny afternoon spent at the beach will never seem the same.

Hodad is available for viewing through Music for Your Inbox.