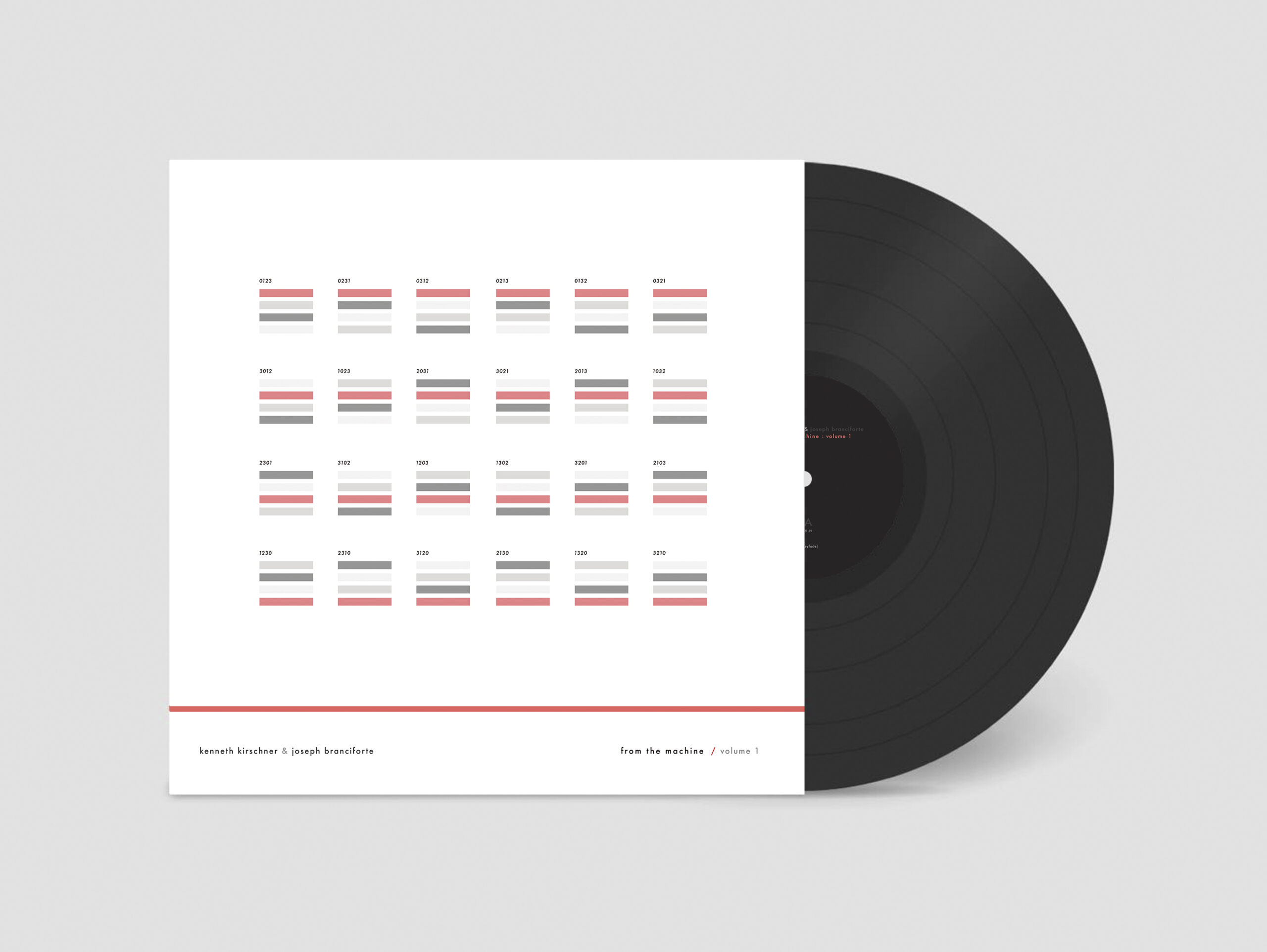 The {greyfade} recording label has recently released From the Machine Vol. 1, a new digital and vinyl album of contemporary music composed entirely by software employing “…algorithmic processes, generative systems and indetermancy.” A collaboration between Kenneth Kirschner and Joseph Branciforte, the two tracks of this album were composed by computer but performed by conventional acoustic ensembles. This combination of digital composition and traditional performance brings the human touch to music that would otherwise be realized by strictly electronic means. From the Machine Vol. 1 attempts to join the creative efforts of computer-based composition with expressive performance by skilled musicians.

Kenneth Kirschner’s April 20, 2015 is the first track on the album and this was originally intended as a purely electronic piece. Starting with acoustic piano and string audio files, the end result was created by applying digital processing techniques such as time stretching, looping and recombination. Joseph Branciforte then tediously worked out a conventionally notated score for Kirschner’s composition so that it could be performed and recorded by an acoustic ensemble. Pianist Jade Conlee along with cellists Mariel Roberts and Meaghan Burke accepted the challenge of playing this piece characterized by independent lines and no formal rhythmic structure. The result is far more successful than might be expected.

April 20, 2015 opens with a series of light, solitary notes in the piano joined by legato notes in the cellos. The contrast between the warm cello tones and sharper piano notes makes for a lovely mix of sounds. There is no phrasing present, but the sequences of two or three notes from each instrument provide a surprisingly coherent sensibility. This piece could easily sound cold or mechanical, but the eloquent intonation and careful articulation by the players adds a level of warmth and expression that is very effective. The piece proceeds in sections of about three minutes each separated by short silences. The form is consistent but the colors vary – sometimes darker and sometimes lighter – depending on the tempo and the register of the moment. Despite the lack of a structural framework, April 20, 2015 always engages and never becomes bland or boring.

The playing throughout is exceptional, given the independent lines and absence of any common rhythmic structure. Listening to this is like looking at a painting comprised of a number of unrelated squiggles that are clearly abstract, yet perceived by the brain as a cohesive image. April 20, 2015 has managed to fuse digital precision and possibility with the eloquence of artful human performance.

The second track on the album is 0123, by Joseph Branciforte and this piece takes an entirely different approach. Based on a four note pitch set, 0123 consists of sequence of tone clusters that form a series of chromatic tutti chords. Each chord sounds for a second or two, and the different combinations of notes in various registers propel the piece forward with a kind of elementary voice leading. According to the liner notes, all of this was created using the Max/MSP programming environment such that “…the underlying algorithm derives the complete harmonic vocabulary of (0123) playable by a given set of instruments…” The idea here is similar to Tom Johnson’s The Chord Catalogue (1986), a piece in which all 8178 chords in a single octave are sounded on a piano. Another recent CD along these lines is Involution, by Dave Sidel, that methodically explores the harmonic possibilities of alternate tuning scales.

This performance of 0123 by a string ensemble allows for more nuance in the playing, even as the rhythm, tempo and dynamics are all included in the compositional algorithm. 0123 was performed by violinist Tom Chiu of the Flux Quartet, violist Wendy Richman, International Contemporary Ensemble, cellist Christopher Gross, Talea Ensemble and double bassist Greg Chudzik, also of the Talea Ensemble. The artful playing by this extraordinary quartet adds an expressive dimension that would otherwise be absent in a purely electronic realization.

0123 opens with low, rumbling chords and the bottom-heavy registers of the quartet add a pleasing weight to the sound. The opening is a bit like hearing a train horn – impressive and dignified. As the chords proceed, some dissonance adds a bit of tension and uncertainty, although never intimidating or menacing. Even the higher strings are playing in their lowest registers, adding to an overall dark and mysterious feel. The ensemble is so tightly cohesive that the sound sometimes resembles that of a pipe organ. There is no melody or rhythmic structure – as each chord is presented it is allowed to express its own personality. Great emotion can be heard in these chords, with no trace of their algorithmic origins.

As the piece continues, the dynamics increase in all voices and a certain amount of tension builds. The chords become shorter, then longer and there is a stronger dissonance in the higher tones. The warm sounds of the cello and double bass are never dominated by the higher strings, and this provides a solid, welcoming foundation against the encroaching tension. The predominance of the lower strings in the scoring is so distinctive and effective that one wonders why it is only rarely heard. A gradual crescendo of sustained chords completes this 19 minute piece. 0123 is a fine example of simplicity, digital rigor and masterful string playing that combine to uncover the deep emotional implications present in clean, uncluttered chords.

From the Machine Vol. 1 is a step forward in the ongoing project of joining computer-based composition to the virtuosity of human performance. Hopefully there will be more to come.

From the Machine Vol. 1 is available directly from {greyfade} in vinyl or as a digital download.