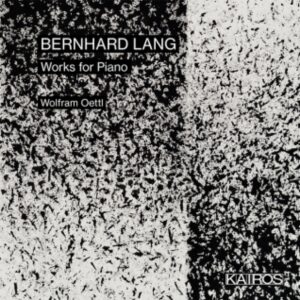 Bernhard Lang (b. 1957) writes in a number of different media, from chamber music to theatre works. His solo piano music is reflective of the composer’s omnivorous interest in various musical styles and his adroit sense of scoring, which allows the piano to have an orchestral impact in the two multi-movement works on his latest Kairos CD.

In liner notes for the CD, Lang remarks that he is interested in free improvisation and DJ electronica as well as contemporary concert music. One can hear this in the angular digressions and motoric rhythms that populate his piece Monadologie V: Seven Last Words of Hasan (2008-2009). The introduction’s use of off-kilter repetition, the stentorian attacks on a single sonority in the piece’s second movement, Hodie mecum eris in Paradisum, and the looping arpeggiations in its fifth movement finale, all reflect an interest in uneven reiterations. Looking a little deeper underneath the surface, Lang  marries these rhythms with disparate harmonic languages. The introduction features Eastern modal writing, the third Messiaen-like color chords, and the finale co-opts post-minimalism a là John Adams. An average composer might be able to juxtapose these elements without harming the end result, but Lang is anything but average in his conception of Monadologie V, in which the traversal of “cellular automata processes” is unified by cohesive formal organization designed from Franz Joseph Haydn’s Seven Last Words from the Cross. While it coheres around Seven Last Words, the piece reacts to rather than merely mimics the original Haydn work. I am not familiar with the other Monadologie pieces, and look forward to tracking them down.

The recording also includes three Intermezzi (written in 2015-2016). The use of “cellular automata processes” persists here. Instead of Haydn, some of the material deals with the figuration, metric evasions, and elusive harmonic progressions of Johannes Brahms, only fitting given his predilection for writing intermezzi as well. The spontaneity of these pieces is not happenstance. According to Lang, the first Intermezzo was entirely improvised “on a gray afternoon.” Another aspect of Lang’s musicianship, his experience as a jazz pianist, takes a role here, with extended tertian sonorities and biting seconds reminiscent of bebop. Bebop plus Brahms? Entirely plausible in Lang’s musical output. The second and third intermezzi use algorithms built from the first to develop organically related, yet disparate creations. Intermezzo 2, Abstract Machines 1, plays with strands of whole-tone scales stacked with dissonant seconds. It is like a broken crank, a bumptious deployment of the verticals from the first intermezzo in relentless fashion. In the third intermezzo, an adagio, Lang arpeggiates the original harmony, blurring offbeat treble dissonances.

Those skeptical of the yin-yang of human improvisation and algorithmic composition would do well to attend to these works, which use both techniques quite successfully.

An interview with Bernhard Lang: