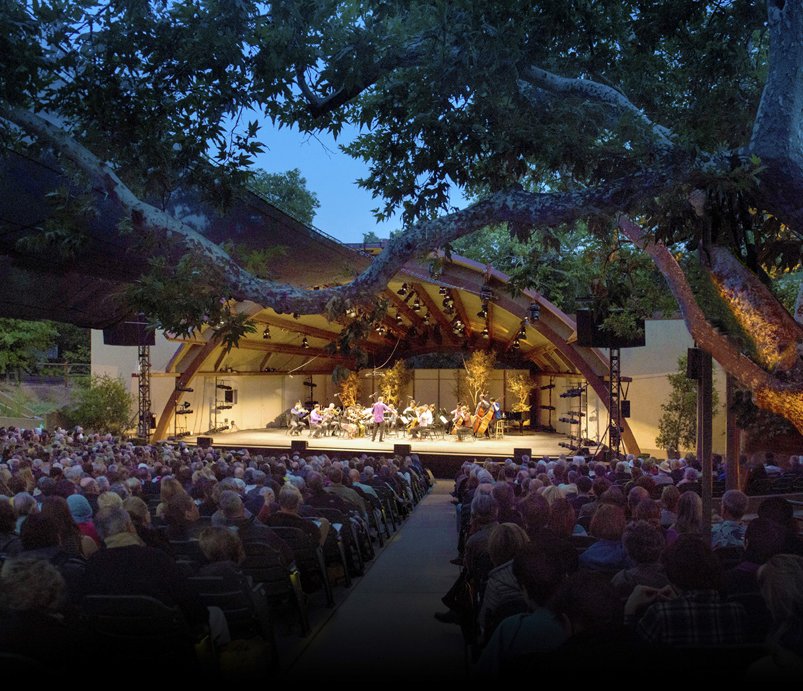 The Ojai Music Festival was re-scheduled this year from the traditional June to mid-September as a result of the continuing Covid pandemic. All the precautions were in place to meet local mandates – proof of vaccination was required for entry and masks must be worn in all concert venues. Even so, the crowds were as large and enthusiastic as ever despite the restrictions and a token anti-mask protest at the entrance to Libbey Park. It was a relief that the festival was finally happening and ready to present live music.

The Friday night, September 17 concert opened with a Chumash blessing by tribal elder Julie Tumamait-Stenslie, impressively arrayed in full regalia. This took the form of two chants in the Chumash language and a simple accompaniment with hand percussion. Elder Tumamait-Stenslie sang out in a clear, steady voice that filled the Libbey Bowl with warmth and welcome. This beautiful invocation needs to become an Ojai Music Festival tradition.

Danse sacrée et danse profane by Claude Debussy followed, with Emily Levin performing on solo harp. A small string orchestra accompanied, and the graceful music of Debussy proved to be the perfect segue from the gentle Chumash prayers. Emily Levin was flawless and seemed to be playing, from memory no less, in every measure of the piece. The ensemble was well-balanced and the excellent sound system in the Libbey Bowl reliably carried every 19th century nuance out into the still night air.

The quiet reserve of the Debussy piece set the stage for the West Coast premiere of Chamber Concerto, a dynamic five-movement work by Samuel Adams written in 2017. Samuel Adams is the son of composer John Adams and so grew up in the context of contemporary music. His wife, Helen Kim, is the principal second violin with the San Francisco Symphony and his sister is also an accomplished violinist. Chamber Concerto combines Samuel’s appreciation of the violin with a solid command of orchestral forms. The violin soloist for this piece was Miranda Cuckson, who gave what proved to be a compelling performance that delivered equal measures of power, drama and introspection.

“I. Prelude: One By One”, the opening movement, begins with a poignant violin solo as the orchestra sections, entering by turns, combine in a beautiful tutti sound. This quiet beginning prefigures the general pattern – Chamber Concerto tends to merge the gestures of the soloist into the rest of the orchestra, amplifying the emotions, rather than having the violin stand apart in conversation with the orchestra. The solo passages weave in and out of the tutti sections with a smoothness and elegance that is both pleasing and effective. “II. Lines (after J)”, the second movement, is faster and includes some quotations from John Adams’ Harmonielehre. There is an uptempo and playful feel, especially in the woodwinds, and a general increase of activity in all sections. The solo violin adds a bit of tension to what is now a swirl of complex passages. The strings pick this up, frantically opposing a low growling in the double basses. The stress peaks with a piercing piccolo passage and the solo violin then discharges the built-up tension with a lovely melody line that is heard against a sustained deep tone in the basses. The movement ends in a powerfully reflective violin solo heard with the orchestra almost entirely silent.

The third movement, “III. Aria Slow Movements”, continues this introspective mood with a solo line that was both solemn and restrained. The violin solo proceeds with a slow and almost mournful feel, working against gentle pedal tones in the basses. The result is very moving and provides a fine contrast to the frenzy heard in the heart of the second movement. The solo violin parts in movements 2 and 3 ran the range from complex and technically demanding to restrained and highly expressive – all masterfully handled by Ms. Cuckson. 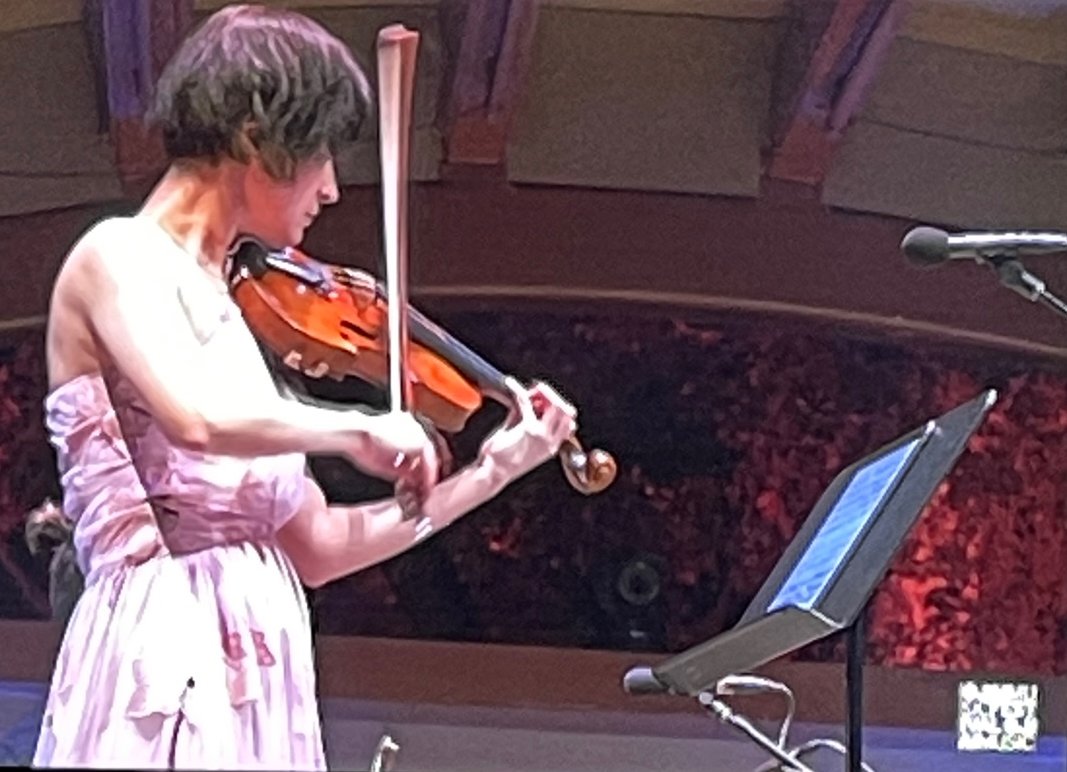 Movement 4, “IV. Off/On” returned to the faster pace with all of sections of the orchestra joining in to create a cauldron of active syncopation. This eventually sorted itself into a more purposeful feel, with strong gestures passed around as the soloist darted in and out of the mix. The tension quickly increased in all sections and was only relieved by the arrival of the final movement, “V. Postlude: All Together Now”. This completed the work with a suitably slow and reflective ending. Chamber Concerto is an amazing piece that stretches the listener, the soloist and the players to their limits. This was a signature performance for the Festival Orchestra musicians, Miranda Cuckson and Samuel Adams.

After a short break, the concert continued with the prelude from Partita No. 3 in E major, BWV 1006, by J.S. Bach. Miranda Cuckson returned to perform this work for solo violin. She was located off-stage by an oak tree in a sleeveless gown, exposed to what had become the chilly Ojai evening air. Nevertheless, all of the many musical virtues of J.S. Bach were on full display, complete with strong rhythmic propulsion and Ms. Cuckson’s solid technique that sounded as if there were at least two instruments playing simultaneously. The Bach brought a bit of familiarity to the audience after the intensity of Chamber Concerto, and figured into the story behind the next piece on the program.

Fog, by Esa-Pekka Salonen followed, with orchestral forces that included strings, woodwinds and percussion. Fog was composed in honor of Frank Gehry, the architect of Disney Hall in Los Angeles. It was inspired by the Bach Partita No. 3 which was the first music ever heard in Disney Hall, played while testing the acoustics of the space when it was still under construction. Esa-Pekka Salonen recalled the sounds of the violin drifting upward into the cavernous spaces of the new hall, as if it were a lifting fog or mist.

Fog begins with an active, uptempo feel in all the orchestra sections producing a pleasing variety of interesting sounds. Because it directly followed the Partita No. 3, there were definite elements of Bach DNA to be heard in Fog with repeating passages and strong, active rhythms. As the piece progressed, the density of the texture increased along with a noticeable element of syncopation. There was a fine piano solo midway, but the complex, swirling sounds eventually dominated, especially in the woodwinds. Fog, always in motion and full of sunny optimism, was a welcome return of the Salonen style to Southern California. The composer was on hand to receive a substantial ovation from the Ojai crowd.

The concert continued with Flow, a piano concerto by Ingram Marshall featuring Timo Andres as soloist. This work was originally commissioned by the Los Angeles Philharmonic for the Green Umbrella series of 2016. Marshall has been a close friend of John Adams since their experimental music days in the 1970s Bay Area and this piece was written with Timo Andres in mind. Flow is a fitting title for this piece, opening as it does with deep, sustained tones in the strings while the piano quietly enters with single notes, tremolos and trills. The surging swell of sound in the orchestra, contrasted by the high running lines in the piano, nicely evoke a flowing stream or strong tide. As the piece proceeds, the piano line mixes in with the orchestra to complete the liquid feel. As Marshall writes “The music is all about flow, and I didn’t realize this was the case until I heard how fluid and smoothly running the material is.” Andres never forced the piano passages, artfully weaving the moving lines in and around the orchestra, or blending as needed. Flow precisely combines the available musical forces to capture the essence of a lively moving liquid.

The final work in the Friday night concert program was Running Theme by Timo Andres, for string orchestra. The piece has three sections, with harmonic and rhythmic variations based, as Andres writes, on the interval of “ a fifth broken over a dotted rhythm.” The strong opening chords and syncopated passages against the bass line give a surging feel to this and the repeating cells provide a generally bustling texture. Later in the piece the rhythms in each orchestra section play off against each other until eventually a nice groove breaks out. Running Theme provided an energetic ending to a fine concert program.

The Friday, September 17 evening concert was thoughtfully programmed and precisely performed. The organizers and musicians deserve the credit for this, and the public responded by attending in gratifying numbers. The uncertainties and restrictions of the present pandemic had only a minimal effect on the 2021 Ojai Music Festival – and this is very good news.