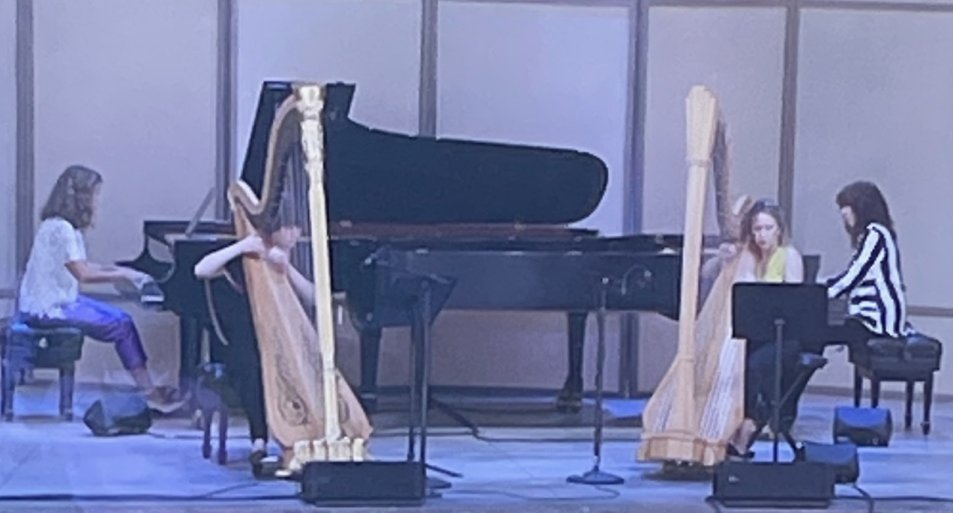 On the last day of the Ojai Music Festival, the 11:00 AM morning concert featured the LA Philharmonic New Music Group performing five works, including a world premiere. The concert opened with Río de las Mariposas, a 1995 piece by Gabriela Ortiz. The title translates to ‘River of Butterflies’ and was inspired by a trip down the Tlacotalpan River near Veracruz, Mexico when Ms. Ortiz was a youngster. The indigenous music heard during that trip, the tropical setting and the Caribbean music Ortiz heard as a student in London are all combined in the nostalgic and magical Río de las Mariposas. The piece features two harps and a steelpan – which would seem an unlikely ensemble – but the mystical sounds of the harps combined perfectly with the exotic steelpan to create an agreeable state of enchantment. It was amazing how many different pitches were heard from the steelpan, and the mix with the harp timbres was unexpectedly appealing. The sweet and simple melodies at the beginning became increasingly complex as the steelpan added its strong Caribbean flavor. Slower sections brought lush melodies that evoked the graceful image of a butterfly. Towards the finish, some tension crept into the harmonies and the rhythms in the melody gradually became faster as the dynamics rose at the end. Harpists Emily Levin and Julie Smith Phillips were superb and steelpan player Abby Savell was everywhere in the texture with precisely the right pitch. Río de las Mariposas is a beautiful portrait of the alluring combined with the exotic in music realized with an unusual set of instruments.

To give you form and breath, by inti figgis-vizeuta, followed and this was an even more imaginative ensemble, consisting of a mobile percussion trio. Each player was stationed near a collection of everyday objects such as flowerpots, empty bottles, wood blocks, drums and stove pans. This began with a series of rapid rhythmic passages from each player that soon developed a nice groove. The amalgamation of sounds was engaging as each percussion station added to a wonderfully diverse mix of timbres and tones. To give you form and breath is based strictly on the changing complexity and dynamics of the rhythms and these were artfully varied so as to heighten listener interest. The playing by Joseph Pereira, Eduardo Meneses and Amy Ksandr was amazingly precise and resourceful. The rudimentary nature of the percussion elements provide a strong connection to the primal and inti figgis-vizeuta writes that this piece “seeks to channel portions of that understanding through ‘ground’ objects and manipulations of rhythm as manipulations of time.” It is often observed that sometimes the most direct ideas are the best, and To give you form and breath certainly makes a compelling musical case.

Next was Hallelujah Junction, the 1998 John Adams piece for two pianos that is named after a truck stop on the California-Nevada border. This is a technically demanding piece and fortunately two of the best pianists in Los Angeles, Vicki Ray and Joanne Pearce Martin, were on hand to perform. This began with a series of bright, rapid phrases that streamed out from each piano. Although sharing the underlying pulse, each of the piano passages was completely independent, full of syncopation and separately uneven rhythms that interleaved with a joyful abandon. The two pianos traded phrases almost as if in a firefight, and this produced a delightful hail of notes and clusters. The playing here was of a very high quality and more impressive was the coordination between Ms. Ray and Ms. Martin, who were in constant eye contact and responded to each other’s outbursts with amazing precision. Although Hallelujah Junction can be very complex, it retains a strong minimalist influence that produced a pleasing groove; the audience in the Libbey Bowl was visibly engaged. Contemporary music, when it tends toward the complex, often builds up tension, but Hallelujah Junction always retained its cheerful exuberance.

There were slower stretches in the piece, with a smooth and flowing melodies providing contrast, but these soon gave way to the faster tempos and spiky rhythms of the opening. There was a short section with the pianos in unison, a call-and-response section and eventually, a big, loud finish. Hallelujah Junction is a memorable work because of its audacious architecture and because of the technical demands placed on the performers – it is hard to imagine how it could have sounded any better than this year at Ojai..

Objets Trouvés followed, a viola piece by Esa-Pekka Salonen with Teng Li, principal violist of the Los Angeles Philharmonic, as the soloist. This was one of a series of short works commissioned for UK violist Lawrence Power, for the purpose of being distributed during the pandemic lock down via film and video; this was its first live concert performance. Objets Trouvés opens with a low electronic drone that at first seemed to be a fault in the sound system. The viola enters, however, and sounds a series of notes near the pitch of the drone, clarifying their musical relationship. After a time the listener accepts the drone as part of the musical landscape and it forms a useful counterweight in tension with the solo viola. Soon, a series of dramatic and rapid phrases are heard that must be very difficult for the soloist, but all were successfully navigated by Ms. Li. The viola passages eventually become slower and more melodic and these were masterfully played by Li with a deep, mournful expression as the piece glided towards its quiet conclusion. Objets Trouvés is a passionate answer to the long suspension of live performances and a reminder of what the Ojai Festival represents for the return of live music in 2021.

The final work of the concert was Sunt Lacrimae Rerum, by Dylan Mattingly. This was a world premiere performance and a co-commission of the Los Angeles Philharmonic and the Ojai Music Festival. Two pianos and two harps made up the ensemble, bringing back to the stage pianists Vicki Ray and Joanne Pearce Martin along with harpists Emily Levin and Julie Smith Phillips – a formidable concentration of talent. Sunt Lacrimae Rerum was inspired by the California fires that raged in September 2020, darkening for a time the daylight throughout the Bay Area. Dylan Mattingly writes: “The sky hummed with a dark orange glow, the only vestige of our star hidden by wildfire smoke high in the air.” The score set out to evoke the unique drama of this moment using “notes the listeners have never heard before.” Accordingly, the two pianos were carefully re-tuned microtonally while the harps remained in standard temperament.

Sunt Lacrimae Rerum opened with the harps playing gently in unison with the pianos entering with active, repeating phrases in the upper registers. A fine groove developed that was abetted by sharp chords from the harps sounding below. The phrases for all the instruments, although independent, eventually migrated up the same registers, enhancing the differences in the tuning. This ultimately became a gentle patter, like raindrops falling in a summer shower. For once the usually reliable Ojai sound system may have let the listeners down a bit – with all the sounds in the same high register and with similar timbre, it seemed more difficult to discern the nuances and interactions of all the notes. The phrases accelerated and the quantity of notes increased so that the overall sounds began to resemble a music box. Strong chords by the harps below added a welcome floor, giving these later passages a bit more depth. The pianos replied with strong chords of their own and soon raised the intensity to a powerful finish.

There is no anger or high tension in Sunt Lacrimae Rerum, but rather a potent cathartic release from the drama of the uncertain wildfire situation of that day. This is not a sorrowful or mournful piece, but, as Dylan Mattingly wrote, “… rather an offering of the life we’re looking for, a transfiguration, the other side.” The Ojai audience agreed, and responded with an enthusiastic ovation.

The 2021 Ojai Music Festival proved to be a great success, if only because it was actually staged. The performances were up to past festival standards and the attendance was gratifying. The credit goes to the festival organizers and musicians who made the commitment to this event despite the great uncertainties of the pandemic.