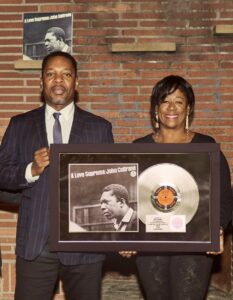 Fifty-six years after its release, John Coltrane’s recording of his suite A Love Supreme has been certified platinum by the RIAA. With the lauded release of the recently rediscovered tapes of A Love Supreme: Live in Seattle, renewed interest has moved the recording of the original to this distinguished sales standard. The Live in Seattle version expands the personnel from the classic Coltrane Quartet to include saxophonists Pharaoh Sanders and Carlos Ward, and a second double bassist Donald Garrett. Thought some outlets have criticized the bass response on the recording, on my rig the vinyl versions sounds excellent. Several interludes augment the original suite with improvised solos.

We have Joe Brazil to thank for recording the 1965 gig at Seattle’s The Penthouse, and saxophonist Steve Griggs for rediscovering the tapes from which this vital recording was made.

The original version of Alice Coltrane’s album of spiritual songs, released in 1982, had a fuller instrumentation. In 2004, Ravi Coltrane discovered alternate mixes that instead just featured Alice’s voice and Wurlitzer organ. These are intimate, simple, and emotionally resonant versions of the material on the album and it was wise to reissue it. The songs combine bluesy chord voices with gospel and Carnatic singing in eloquent synchronicity.