Chris Votek – Memories of a Shadow 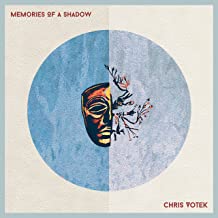 Microfest Records has recently released Memories of a Shadow, a new CD by Chris Votek. The liner notes state that Votek is “…an innovative composer refracting Indian Classical music through the lens of modern chamber music.” The string ensemble performing on this recording consists of two violins, two cellos and a viola. The lower registers predominate, creating an unusual sonic balance and perspective. The resulting album is an appealing blend of raga forms incorporating Western medieval harmonies clothed in deep tones and a rich timbre.

Serpents, the first piece of the album, opens with sustained tones dominated by the cellos with more active phrasings in the higher parts. The tempo is measured, but not slow, creating a sense of quiet drama. There is a solid, woody foundation to this that alters the harmonic center, challenging the listener’s preconceptions of string ensemble music. The deepest tones are often gnarly, but this only adds to the refreshing context. As the piece proceeds, a series of intertwining passages coil in and around each other – serpent-like – but there is no menace in the lovely harmonies that develop. Serpents is beautifully wrought, the musical equivalent of a finely carved wooden sculpture.

Fossil Dance follows, with a fast opening that features active rhythms and nicely blended harmony. Repeating parts follow each other and a pleasing groove develops. There is less of the exotic and a more traditional feeling to this piece with a plaintive feel and a marked sense of introspection. The independence of the parts and the formality of the structure combine in Votek’s elegant and mature style. The ensemble playing is solidly skillful and always expressive. The tempo picks up about midway through and a bit of tension creeps in, especially in the violins and then the cellos. The pace gradually increases towards the finish, bordering on the anxious, until a sudden slowing returns to a solemn and almost sorrowful courtliness at the end. Fossil Dance is a refined and artful exposition of the emotional potential inherent in string music, masterfully performed.

The third track, Migration of the Fires, begins with a series of long, languid phrases and graceful harmonies. The rich timbre and dignified ambiance soon morphs into independent parts, each spinning actively in and out as the tempo gradually increases. The phrases have movement in the cellos while the violins hold lightly sustained tones above. This is all very deliberate and under control, even as the pace increases. About midway through, the piece goes from a trot to a canter and this adds a touch of anxiety. The playing is always disciplined and very precise with fast running phrases and strong bowing. By 9:00 everything slows again, as if out of breath. There is a much slower tempo now, with long sustained tones as the piece quietly fades to a finish. Migration of the Fires exhibits the same mature style and wide range of expression heard in Fossil Dance and is equally enchanting.

The final piece on the album is Bhimpalasi – Chota Khyal . Chris Votek, on cello, is joined by Neelamjit Dhillon on tabla performing this “traditional Hindustani raga in the singing style – gayaki-ang.” A low drone sound sets the foundation as the cello enters with a strong intonation in its very lowest register, almost as a growl. Even at this depth and slow tempo the phrasing is noticeably lyrical, if somewhat somber. At 4:40 the tabla enters with a welcome beat that lightens the mood and soon generates a pleasant, ambling groove. The style of this piece is consistent throughout but the details constantly change and evolve. The deep tones magnify the sense of singing that is heard in the cello melody and this seeming contrast holds the listener’s attention. At 11:40 the tempo picks up a bit and the cello is ‘singing’ more in a middle register with faster and plaintive phrases. A repeating theme soon appears in the cello and serves as a departure point for improvised variations. Towards the finish, the tempo increases again as the notes pour smoothly out of the cello and the tabla provides a solid rhythmic framework. Votek’s command of the cello is impressive and the coordination with the percussion is seamless. Bhimpalasi is clearly a traditional Indian form, but the expressive playing in the cello makes it more accessible to the Western ear – the kind of music you wish would last longer.

The artistic vision of Chris Votek for Memories of a Shadow succeeds with its unusual combination of classic Indian ragas mixed with contemporary forms, an unconventional string ensemble and a high technical level of performance.


Memories of a Shadow is available from Microfest Records and as a digital download at Amazon Music.