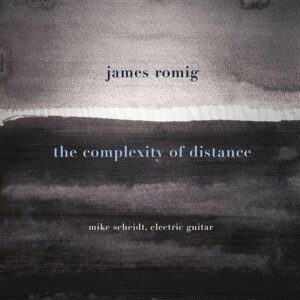 The Complexity of Distance

James Romig is best known for his solo piano piece Still, an hour long meditation on the paintings of Clyfford Still. Trained at Iowa and obtaining the Ph.D. at Rutgers, where he worked with Charles Wuorinen and Milton Babbitt, Romig has a number of serial works to his name. The structuring of Still displays this, but the surface has a limpid character and the gradual development of the material also demonstrates an affinity for Morton Feldman and Earle Brown. Pianist Ashlee Mack’s recording of Still was a finalist for the Pulitzer Prize, an unusual choice for the committee, as large-scale works – opera, orchestral pieces – are more often selected.

Romig’s current project is an even greater departure. The Complexity of Distance is for solo electric guitar, tuned down a fifth so that the low string is A instead of E. It was commissioned by doom metal guitarist Mike Scheidt and composed during the remote times of the pandemic via long distance communication. Scheidt is best known as being part of the band YOB, but he adapts well to the detailed notation and solo context of TCOD.

The piece opens with a sustained open power chord, which forms the basis of the piece: roots, fifths, and octaves, seldom thirds. TCOD’s rhythmic structure is a three-line canon, which Romig describes thus,”The first rhythmic strand alternates, at a time-interval of 13 beats, between chords with roots written E and G (sounding A and C in A-standard tuning). The second strand alternates every 14 beats between chords with roots of C and D (F/G). The third strand alternates every 15 beats between chords of B and A (E/D).Beginning and ending with a unison pulse in all three strands, the 13:14:15 ratio takes 2,730 beats to resolve. At a metronome tempo of 48, this cyclic process lasts nearly an hour.”

The canonic techniques that Romig is using have ample precedents, from Ockeghem and Josquin in the Renaissance, to Conlon Nancarrow’s player piano pieces in the twentieth century, and Babbitt, Carter, and Wuorinen’s use of time points and canonic devices in their post-tonal pieces. The overarching structure requires patience to apprehend, but it is a well-conceived use of rhythmic design. On the death metal side of the equation, the power chords use feedback and distortion and sustain through the score’s rests. Many of the chords employ open strings for resonance. Scheidt’s choice to tune down allows the piece to co-opt the sonic signatures of doom metal, its sepulchral register and slow tempos.

TCOD is a curious amalgam. It stretches the stylistic possibilities in which one may incorporate complex canons and serial procedures. A departure for Romig to be sure, but a winning one.