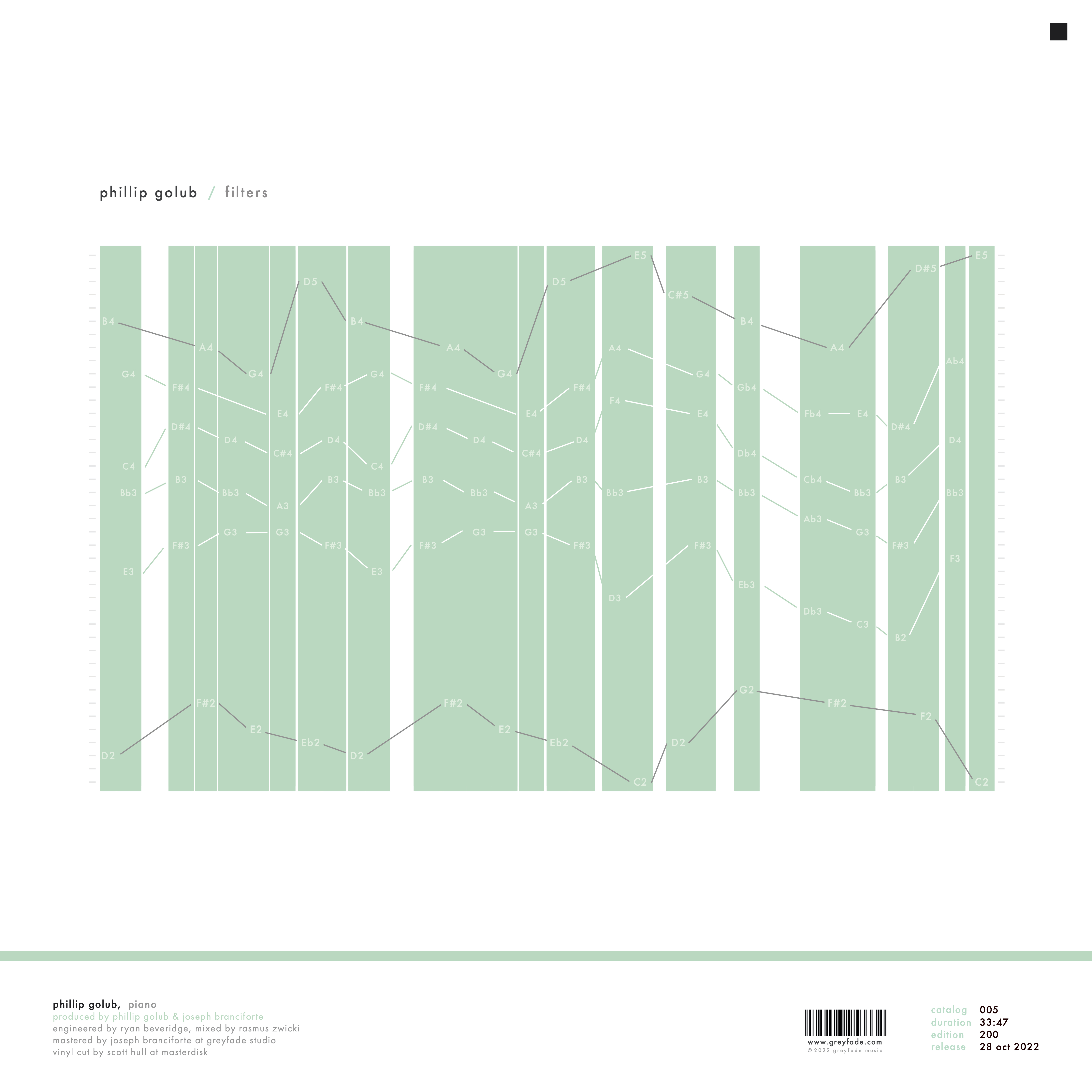 On October 28, 2022, Greyfade released Filters, a debut album of solo piano music by Phillip Golub. Based in New York, Golub has been performing for decades in both classical and improvisational settings. In Filters he explores the intersection of musical repetition and improvisation. The album consists of four piano ‘loops’, each about 8 minutes long. Each loop is a series of repeating phrases that maximize expression by the performer while severely limiting harmonic and rhythmic changes. Careful listening allows discernment of the unique contributions of the performer without distraction. As Golub writes: “When we know the repetition is not mechanical, there’s a certain feeling of needing to stay very focused with the performer, to be there with them.”

How does this sound? The piano phrases are simple, consisting of a few notes and chords played at a moderately slow tempo. The phrasing seems halting, even syncopated at times, and are not constrained to a strict beat. The pitch set is limited with only a few changes as the sequences proceed. There is a generally reflective feeling in these loops, marked by an absence of technical flash or drama; a sort of unsettled rumination. The phrases are similar upon repetition, but never identical – always with the same interior feel, but never tedious. At first this seems to be a variety of classic minimalism, but the variations in the cells are more subtle. Steve Reich wrote that his minimalist phrasing was varied by adding or subtracting a note or two in the cells after a certain number of repetitions, allowing the overall pattern to dominate while introducing variations gradually.

Golub takes this one step further in that the variations are introduced by the performer in the playing and not by the composer in the scoring. There are small changes to the timing of the rhythms, a change of emphasis on the individual notes and very slight differences in tempo. All of this results in subtle alterations of the musical surface and micro-acoustic detail – in other words, the variations are all driven in the moment by the pianists ‘touch’. The loops presented in Filters are just eight minutes long, but they are meant to be played as long as desired. Each 8 minute loop in the album is an edited subset of a 45 minute recording and some of Golub’s live performances have extended for several hours.

More specifically, Golub writes: “Each loop on Filters contains two ‘streams’ of music. The outer stream consists of a single high note and a single low note on the piano, always struck together. The inner stream is a succession of simple major or minor triads — with an occasional suspended fourth or added seventh — that continually re-contextualize the color of the pitches of the outer stream. Something mysterious and magical happens here that is unique to the resonance, decay, and overtones on pianos. I think that this blending of the louder outer stream with the quieter and denser inner music is at the core of the effect.”

Each of the loops, while similar in construction, have their own distinctive emotional character. Loop 1 is typical with a quietly moderate tempo and repeating phrases. These are very similar, but are heard to be slightly different in each sounding. The small variations in the phrases are not obvious, but invite close attention so that the repeating sequences engage the listener and are never boring. There is a warmly introspective feeling that is also welcoming to the ear. Loop 3 is similar, having the same reflective feeling with perhaps a bit of optimism. Loop 4 has a more ambiguous feel; its character is full of uncertainty and questioning. The most contrasting track, Loop 5, is pitched in a somewhat higher register and includes enough dissonance to produce a sense of disquiet in the listener. A bit elliptical and mildly frustrating at times, Loop 5 a departure by being more anxious than introspective.

Filters is a cutting edge album that illustrates how the performer can exert the critical creative input from within the confines of a strictly minimalist framework. The subtle variations in the repeated cells of these loops arise in the moment from the inventive touch of the pianist and are not the result of formal structures. With Filters, Phillip Golub has restored creative primacy to the individual musician, even within the heart of a highly process-oriented music.

Filters is available directly from Greyfade.